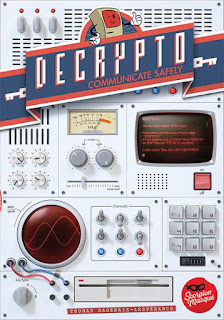 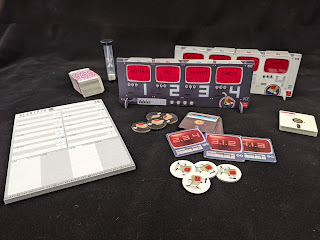 Players sort themselves into two teams. Each team takes a record sheet, one of the two display stands with four code terms in it and the matching-coloured stack of code cards. The display stands uses red cellophane to reveal code terms.

Often, players make the mistake, when learning the game for the first time, of thinking that they need to figure out what words the other team has.

Instead, teams use the words to communicate numbers. It works like this: Players on each team take turns drawing a code card (which I am delighted to say resemble the old 5 ¼ inch floppy disks that I so strongly remember from my childhood) that contains three numbers (1, 2, 3, or 4, non-repeating). For example, as seen in the photo above, the cards may read 2.3.4, 3.1.2, or 4.1.3. That player must then get their teammate(s) to correctly guess the number code. This is done by using the words in the display stand.

Each stand has four slots. At the beginning of the game, a card is placed in each slot so that the hidden word is revealed. Here's a close up of one such stand, revealing that the white team has 'scream' as word 1, 'ink' as word 2, 'window' as word 3, and 'white' as word 4. 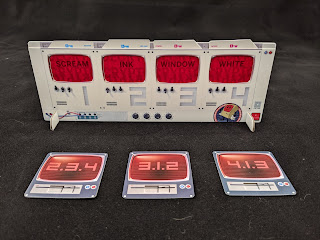 The player with the code card then says three words aloud. These words are intended to let their teammate(s) know which of the four code words are associated with the numbers in question. So as an example, if the code reader is holding the card on the left in the photo above (with the code 2.3.4), they might choose to say the words 'Newspaper, curtain, ivory.' Their teammate(s) would then look at the words in the display. Since 'newspaper' doesn't seem to have anything to do with the displayed words 'scream,' 'window,' or 'white,' it seems likely that 'ink' is the word at which the code reader is hinting. This lets them know that the first number in the code is 2. 'Curtain' obviously goes with 'window,' and 'ivory' probably goes with white.

However, before the code reader's teammate(s) guess, the players on the other team get to guess. They can't see the words in the display stand, so they will be guessing basically at random to begin. However, they write down all the words the opposing team's code reader says out loud, as well as the correct code once it is revealed. This gives them clues that will help them to guess in later rounds.

If the opposing team correctly guesses the code, they get a white token. If a team gets two white tokens, they are declared the winning team. If the opposing team does not correctly guess, the active team guesses. If the active team does not guess correctly, they get a black token. If a team gets two black tokens, they are declared the losing team.

That description was hard to follow, I'm sure. Let me give you an example of play to make it easier to understand. For this example, we'll imagine that Aaron, Amanda, and Andrew are playing together on the White team, and Beth, Bob, and Betsy are on the black team. It is the third round of the game, and it is Aaron's turn to draw a code card for his team. We'll stick with the 'scream,' 'ink,' 'window,' 'white' example from the photo above.

Beth, Bob, and Betsy look at the notes they have written on their sheet. They see that in previous rounds, the word 'pain' was used for word 1. Word 2 was represented by 'newspaper' and 'india.' Word 3 was associated with 'curtain' and 'cathedral.' They only have one word written for number 4: 'ivory.' Based on this information, they agree that 'mayonnaise' probably goes with 'ivory,' on the basis of both being white. So they decide to guess that the first number in the current code is 4. They're less certain about 'horror;' Beth thinks it goes with 'pain' in some way to represent word 1, but Bob and Betsy both insist that it goes with 'curtain' and 'cathedral' as some sort of reference to gothic movies. Bob and Betsy are convinced that 'glass' refers to 'pain,' as an allusion to cutting yourself on broken glass. They are not swayed by Beth's argument that 'glass' might be a reference to a window, which goes with curtain, and has something to do with the stained glass in a cathedral. As a result, the black team guesses that the code is 4.3.1.

Aaron informs the black team that their guess is incorrect. They do not get a white token. Now Amanda and Andrew get to guess the code. Since they can see the words in the display stand that Aaron is using, it is much easier for them to guess: they state that they think the code is 4.1.3. Aaron informs them that they are correct, so the white team does not get a black token.

Now that the black team knows the correct code, they write the words that were used in the space for the correct numbers, giving them additional information to use in subsequent turns, as Beth gloats that they would have received a white token if they had listened to her.

This is a fun game for people who know each other at least fairly well. When I played with John against his daughter and her friend, the generation gap made it very easy for teammates to guess each others' codes but very difficult for the other team to guess. For example, one of our words was 'truck.' I used the word 'Tonka' to represent that number, which John (of roughly the same age as me, and thus familiar with the toy trucks which were common in the 70s and 80s) guessed easily. Meanwhile, the two teenagers did not know what the word 'Tonka' meant, at least at first.

It's not a heavy game at all. Maybe a light filler, or something to play with people who aren't 'serious gamers.' But it was still fun, and I don't regret having purchased it.

And now for the moment you've all been waiting for, the six characteristics of a good game:
This game does have all six! So that's a good thing!

Now, go forth, be cryptic, and have fun playing games out there! Until I see you back here next week, remember to