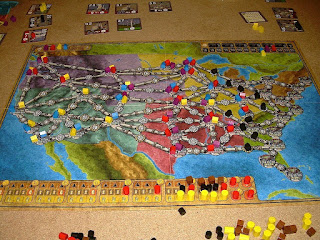 
An Overview of Power Grid

The base game comes with a double sided board. One side is Germany, the other side is the continental United States. You can buy expansions that allow you to play in many other areas: Australia, Japan, Spain, Russia, and so on. I played on the British Isles board. But the game play is the same, regardless of where you're building your network.

Players are owners of an electric company. They must build their networks to be able to power the most cities of all the players. Players start with one city in their network, each in a different but adjacent region, and expand outward from there. They earn money, called 'elektro,' by powering cities, and use their elektro to purchase new plants, resources, and add cities to their networks. A round takes place in five phases:

The player in first position as determined in the 'Determine Player Order' phase bids on an available power plant. Power plants are numbered, and the player must bid at least that value. The higher the number, the more powerful that plant. Other players are able to bid as well, but once they've passed on bidding for a specific plant, they may not bid on that plant again. Once all but one player have passed on a plant, the winning player takes it and pays the amount bid.

After replenishing the market, players continue bidding until everyone has purchased a new power plant, or opted not to. No player may have more than three power plants, and so if a fourth one is purchased, one of your existing plants must be discarded.

Most power plants require resources in order to power a city. A few plants use solar, water, or wind power, and thus require no resources. But most will take coal, oil, garbage, or uranium (some can be powered by more than one type). These resources are arranged on a track on the board. The more resources there are, the cheaper that resource is. In reverse turn order, players buy as many resources as they want and can afford. These must be stored in your power plants, and you can only store twice the amount that a plant requires to generate power.

During this phase, players may place their house tokens in cities to add those cities to their networks. During Step 1 (more on steps in a moment), only one player may have a house in a given city. It costs ten elektro to build this first house, plus the connection cost. Each connection printed on the board has a connection cost listed on it. You must pay this cost in addition to the normal ten elektro. It's possible to skip over a city and pay two connection costs.

Each power plant card indicates how many resources, and which type, it requires, and how many cities it powers. During the Bureaucracy phase, you spend the necessary resources to power your power plants. You don't have to power all of them, but the more cities you power, the more elektro you receive. Then you finish the round by placing additional resources onto the track according to how many players there are.

The game occurs across three steps. The first step lasts from the beginning of the game until one player has built seven or more cities. Then you move into step two, which lasts until the 'Step 3' card comes up in the power plant deck. Step three lasts until the end of the game.

The second effect is that the number of resources being placed on the board during the Bureaucracy phase varies from one step to the next.

The game ends after the build phase in which one player builds their 17th city (15th in 5 player games, 14 in 6 player games, and 21 in 2 player games). The winner is the player who is, at that moment, is able to power the most cities. It doesn't matter if he has the power plants to power the most; if he doesn't have the resources to actually do it at that time, it doesn't count.


My Thoughts on Power Grid

This game is a lot of fun. A ridiculous amount of fun. I know this review is kind of lengthy, but it's really a pretty simple mechanic. Once you've played a round, it's very easy thereafter. Furthermore, this game produces an astounding amount of strategy, planning, and cunning. You wouldn't think it about a game in which you're basically building a power company's infrastructure, but Power Grid is a surprisingly contentious game. Simple actions can inspire frightening levels of antagonism.

A perfect example: when playing with John, Zeb, and David, I found myself eyeing a very nice power plant. It could power 6 cities for free. On David's turn during the Buy Power Plants phase, this plant was the first one in the 'future market' row. This meant that whatever plant was purchased on this turn would make space for this amazing plant in the 'current market' row. But I didn't want David to get off easily, either; I decided to try to increase the price just a little bit before letting David have whatever plant he was bidding on. So after his opening bid, I bid one elektro more. David immediately conceded, meaning that I was stuck with a power plant I didn't want and he got the awesome one that powered six cities for free.

Needless to say, I said some very unkind things.

That wasn't the only time in that game when one player's actions enraged another. Any game that can produce that much ire from such a simple setup is clearly a winner.

So I fully agree with Cracked's assessment: this game deserves to be in the top 100 forever. So go out, give it a try, and come back next week for more games discussion. Until then,