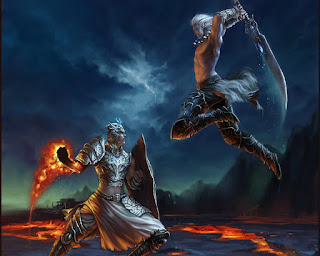 The most common reason that inter-party tension exists is when player types are at odds. Butt Kickers, for example, come to the gaming table for the express purpose of slaughtering monsters or other foes. They agree with Conan the Barbarian when he says that what is best in life is to crush your enemies, see them driven before you, and to hear the lamentations of their women. But this play style is anathema to Method Actors, who want to explore the minutiae of their characters' personalities.

Sometimes, personality conflicts arise between players. This can be a danger when bringing together players who've never met before. On occasion, you will find that there are two people who just don't get along.

It's also possible for play style to conflict. This often parallels the player type conflicts; Tacticians tend to get snippy if the GM doesn't implement the rules exactingly, whereas a Storyteller may want the GM to play loose with the rules in order to serve the needs of the story. But it doesn't always work that way. It's possible for a Specialist to be irritated when the group tweaks the rules whilst a Power Gamer is ok with a little fudging.

The easiest way of handling player conflict is ensuring that the players in your group all get along. If you're lucky enough to know a group of people that already get along, enjoy playing the same type of game, and are willing to play the game that you want to run, this problem will likely never arise. Even if they've never played an RPG before, existing inter-group harmony is much more likely.

When creating a new group, it's best to try to invite people whom you already know, and can trust to get along. Always specify up front what sort of group you're looking for. Let the potential players know if the game will be combat heavy or light. Inform them of how much a focus story and characterisation will be. This will help to prevent frustration when players don't get what they want, out of the story or the group itself.


Identifying the Source of Player Conflict

It's not always possible to prevent conflict. Sometimes, it will crop up despite your best preparations. When it does, try to work out why the conflict has occurred. Is it personal in nature? Is it the result of different play styles? Are the players arguing over silly details like who's character is better?

Sometimes, it's obvious why the players are at odds. Other times, you must analyse the situation. Talk to everyone involved and find out what's going on. See why people's feelings are hurt. This will help you in moving forward.

Once you know what's wrong, you can move forward. Discuss the issue with the players. Remind them that everyone is here to have fun. Ask them help come up with solutions. Help them to understand the other player's perspective. Remember to always be calm and reasonable. Getting angry will only aggravate the situation.

Once that's done, try again. Help the players to get along in the moment. Remind them, gently, if necessary, of what you talked about before. Do your best to be fair.

Sometimes, the problem cannot be resolved. This is usually the case when the conflict is one of incompatible personalities. However, it can happen sometimes with other sources of player conflict as well. It may be that one or more players must be ejected.

If it comes to that, you must weight the possibility of saving the group as a whole versus the benefit of rejecting a single player. Can you ask one player to leave and continue with the rest of the players? It's never good if the whole group dissolves as a result of the bad actions of one player. But if nobody is having fun, maybe breaking up the whole group is the only reasonable solution. When one player leaving causes the rest of the group to be too small to continue, it may be the best course of action to stop the game entirely. You can always try again with a new group, after all.

When asking someone to leave, be as gentle as possible. Don't cast blame, don't accuse the player of anything. Just explain that, in the best interests of everyone involved, it would be better if he or she were no longer part of the group.

It's an unpleasant topic, but it's one that everyone most be ready to face. Using these tips can hopefully make player conflict as manageable a task as possible. And most importantly, remember that it's not your fault. At least, not if you've done everything you can to maintain group harmony. If you've taken sides, antagonised one player or the other, or otherwise helped to exacerbate the problem, then some of the fault does lie at your feet.

But you're not that kind of GM, are you?

That's all for this week. I look forward to seeing you here next week. Until then,