John usually goes up with several of his friends, but this year, I was pretty much the only one that was available. So as soon as I finished work on Wednesday, I picked him up along with his children, and we drove until we reached a friend's house in St Charles, one of the suburbs of St. Louis. We got a few hours of sleep, ate breakfast, and drove to the convention centre.

Not long ago, I drew a little comic to express how isolated I sometimes feel, when the people around me don't appreciate the things I enjoy. It looks like this: 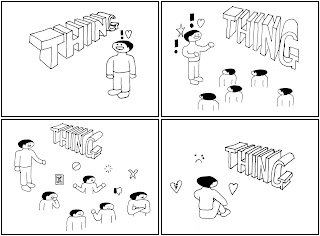 Walking into an entire convention hall packed with people who share my love of board games? Yeah, that was a nice feeling. 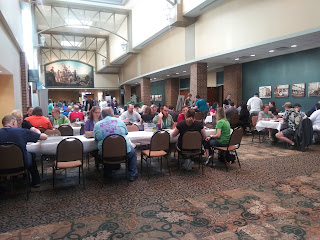 That's just the entrance. Through the doors on the right is the main hall, which is much larger, and was packed with people at tables. Something like this: 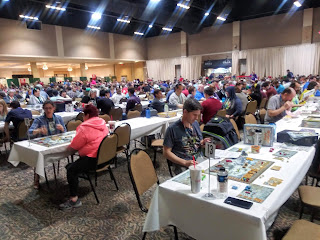 That's only half the hall. I was standing about midway down the hall, looking towards the vendor area. There are at least as many people out of frame on the right.

People can bring their own games to play, or play the games they buy in the vendor area, but the main draws are the games library and the play-to-win library. The library is straightforward: you scan the game you want to check out, then scan the barcode on your visitor badge. Then you play the game. Bring it back and check it in when you are done.

And secondly, each time you play a game in the play-to-win library, you're entered in a drawing to win that game.

When you check in a game, you log on to a computer in the play-to-win room. It shows the games you've checked out but haven't registered. You're allowed to enter the names of the people who played with you, so they have a chance to win it too. You are given the option of rating the game on a scale of one to five.

Then, on Sunday morning, the computer randomly selects one person from the list of people who played the game (ignoring anyone who's already won a different game) for each copy of the game in the library. That person gets to take that copy of the game home!

I won a copy of War Chest, which I will (of course) review at a later date. John won a copy of Expancity, which his son enjoyed, so we were both pleased with our prizes. 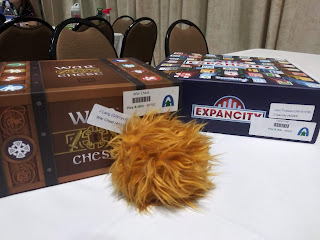 Pretty much all day on Thursday, Friday, and Saturday, we checked out and played games from the play-to-win library. We got a couple from the regular library from time to time, but mostly, we just played games. From the time we arrived around 10 in the morning until about midnight. Then we had to wrangle John's offspring so we could get some sleep in preparation for the next day.

On Sunday, we played a couple games from the regular library (as the play-to-win library was closed in preparation for the announcements of winners) until they announced the winners. Then we collected our prizes and drove home. 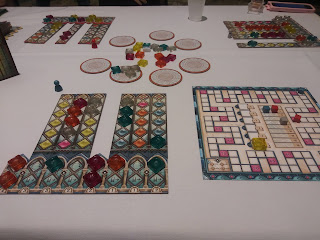 We learned some awesome new games (such as Azul: Stained Glass of Sintra, as seen in the photo above), played some familiar ones, and even learned a couple that we didn't really care for so much. 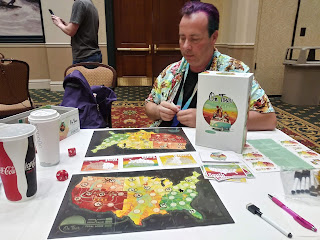 All in all, I enjoyed it very much, and I am already looking forward to going back next year!

If you're in the Missouri area (or close enough to travel), and you like board games, I highly recommend this wonderful convention. And if you're there, and you see me, come by and say hi! Until then,