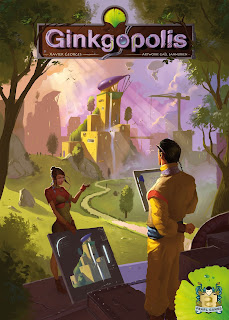 
An Overview of Ginkgopolis

The year is 2212. As the resources available to mankind dwindle, new methods of building cities have come to prominence, which balance the production and consumption of resources. The Ginkgo Biloba has come to symbolise this new symbiotic relationship. You, as a player, are working to build the cities around you in the most efficient manner possible. Although you don't take any direct action against other players, you can spoil their plans with some well-laid plans of your own...

The game consists of sixty city tiles, twenty each in blue, red, and yellow, and a corresponding card for each tile (all of which are numbered). There are also urbanization cards and corresponding tiles (these tiles are round rather than square), which are marked with the letters A through L. Each player gets small wooden cylindrical tokens in their chosen colour to represent resources and a small screen to keep their things hidden. Victory point tokens in the shape of ginkgo biloba leaves, some character cards, a set of slightly larger gray cylinder 'construction site' tokens, a handful of 'new hand' tokens, and a card for the first player marker complete the set.

The first three tiles in each colour are shuffled together and laid out randomly in a three by three grid. The remaining city tiles form a draw pile. The letter tiles are arranged alphabetically around the edge of this grid. The corresponding cards (both letters and numbers) are shuffled into the starting deck. Players get three character cards (either through random deal or through a pick-and-pass system), which determine how many resource tokens, city tiles, and victory points the player starts with. Deal out four cards to each player.

Each turn consists of playing a card from your hand. Cards are played face down, optionally with resource tokens and city tiles on them, then all players reveal their cards at the same time. Players execute their cards in player order, starting with the player who has the first player card in front of their screen. These cards can be played in one of three ways:
After each player has executed the cards they've played, pass your hand to the left. The first player card is also passed left. Draw up to a hand size of four. Then repeat the process of playing, revealing, and executing cards.

Each card that you have in your tableau grants you a benefit. Some of them give you something (resource tokens, tiles, or victory points) when you take the Exploit action. Others give you something when you Urbanize, or when you Build. Still others give you bonus victory points at the end of the game based on certain criteria (like the one that gives you a success point for each resource you have on blue tiles, just as one example). Both the character cards with which you start the game and the city cards that you add to your tableau during the course of the game give you benefits of this nature.

Additionally, each time you add a tile to the play area, either through the Urbanize or Build actions, you must place one of the construction site tokens on the newly placed tiles. Then, when the deck runs out and you need to shuffle the discard pile to form a new draw pile, you must add the corresponding cards for each tile that has a construction site token. Then remove those tokens. In this way, cards are added to the deck as new tiles are added to the city itself.

Furthermore, if you don't like the cards you have in your hand, you may spend one of the two 'new hand' tokens you receive at the beginning of the game to discard your entire hand and draw four new cards. This prevents you from feeling like you have no good options. Be careful about doing this, though, as you may only do it twice, and you get two bonus points at the end of the game for each 'new hand' token you still have.

Ending a game of Gingkopolis

Alternately, if at any point, a player has all of their available resources in the city (that is, none of the resources of that player's colour remain either in the general supply or in that player's personal supply), the game ends immediately.

Once the game ends, each player totals up their end game score. In addition to the points received from tokens throughout the game, add any points from cards in the tableau with end-game bonuses and remaining 'new hand' tokens. Then move on to final scoring.

The winner is the player with the most points.

Also, by playing tiles of a different colour onto a stack, you are changing the layout of the board entirely. By strategic placement of these tiles, you can split a large district into two smaller districts, and/or join two small districts into a larger district. The fact that single tile districts don't count for points also impacts this; joining a single-tile district to another tile to make it count for points, or separating off a single tile from others of its colour adds additional strategic considerations.

I also said that it's got aspects of a deck builder. Since you're adding cards to the deck with each tile you play into the city, the deck is constantly changing and shifting. But all players draw from the same deck, and cards are also constantly being removed from the deck.

And it has elements of resource management; you have a limited number both of tiles and resource tokens to use in the course of the game, but you occasionally get resources back when someone builds on a space that you have previously occupied.

This all combines to make a unique game. But of course, let's not forget the six characteristics of a good game:
Given the unique mechanics involved in this game, it has a bit of a learning curve. Once you've played the game once or twice, the rules become much easier to understand. But even for accomplished gamers like myself, understanding the rules the first time I read the rulebook was not as easy as I would have liked.

Still, overall, I enjoyed this game, and I'm looking forward to playing it again some day soon. But please don't let my opinion sway you; decide for yourself whether to give it a try! And whatever you do, please don't ever forget to