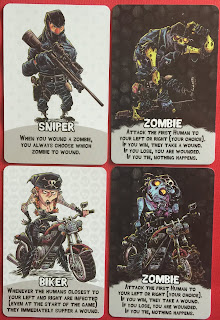 We'll start with the one that wasn't technically a new release. Steve Jackson Games actually released this one last year. Still pretty new though...

To play, deal out one card to each player. Each card has a front side, which displays a human character, and a back side, which displays the zombified version of that character. Each human has a different power. All zombies have the same text, describing how the zombies work. Every other player turns his card to the zombie side, so that the circle consists of equal numbers of humans and zombies, with a human on either side of every zombie and vice versa.

On a player's turn, he or she chooses to attack the opponent closest to him either on the right or the left. At the beginning, that means the player sitting next to him. But as humans are zombified and zombies killed, there may be several people on the same team between him and the next player on the opposite team. Just ignore the players on the same team when choosing whom to attack.

The two players (attacker and defender) play Rock Paper Scissors. The loser takes a wound. Nothing happens in the event of a tie. Humans may have a power that allows them to do something unusual, such as making a different zombie take the wound, or healing another human in the event of a tie. 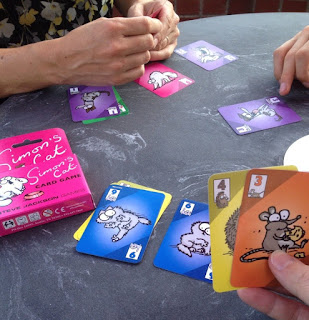 Next is the big release that was heavily promoted this year. Steve Jackson Games secured a license to make a card game based on Simon's Cat, a series of humorous videos following the adventures of Simon, his cat, and several other companions. Each of the six companions (the titular cat, a kitten, a mouse, a dog, a hedgehog, and a garden gnome) has its own colour (pink, blue, orange, purple, yellow, and green, respectively). Each character's cards are numbered. However, there aren't the same number of cards in each colour/character. Not all of the colours are fully sequential, either. Some start at 3, others skip numbers.

These cards are dealt evenly to all players. Then you play Uno. Seriously, it's basically the same game but with two more colours and uneven number distribution. When one player plays a card, the next player must either match the colour or the number of that card. If you can't play, you collect that stack of cards and play a new card to start the next round.

Once all players are out of cards, the player with the most stacks of cards gets blamed for the mess. He takes a card with an illustration of Simon to represent the blame. The first player to get three blame cards is the loser. 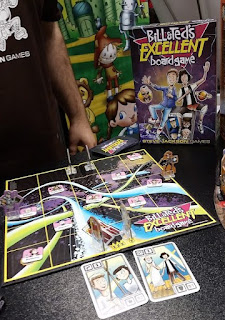 Steve Jackson Games also managed to get a license to make a game from the Bill & Ted franchise. Players move around the board collecting some of the historical figures that featured in the first film. Each player chooses two cards from his hand and plays them simultaneously. These cards feature numbers that determine turn order, as well as movement directions (forward, reverse, turn left, turn right, turn around). Players move their phone booth markers according to the cards they've played. If they land on a token for a historical character that they don't already have, they pick that character up.

Two bad things happen: first, every character token you pick up has directions on the back. You will apply these, in order, before the cards that you played. Thus, the more historical characters you have, the more unchangeable random movement your piece will experience. This is bad because:

Once the deck is empty, the player with the most historical characters is the winner.

I wasn't super impressed with any of these games. None of them require a whole lot of thought. Especially I Hate Zombies; the person demoing the game said that she had never seen the humans win a game. Unless you're just a fan of the comedic zombie genre, I can't imagine anyone wanting to play such a one-sided game.

Simon's Cat seemed too much like a re-work of Uno. Not much appeal there. Maybe a good game to play with little kids, but I personally don't see much draw in this one.

And I really wanted to like Bill & Ted. I was a fan of the film, after all. But the lack of control over your movements that comes with each character you pick up spoils what would otherwise be a good programming game along the lines of RoboRally.

As always, that's just my opinion. Please read what I've written and give the games a try for yourself if they sound appealing to you. But for now, we are done with the Gen Con posts. Next week, I hope to have a little surprise for you! Until then, remember to