Casinos: Gambling vs Board Games 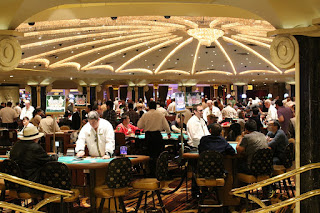 An ex-girlfriend of mine once told me that I think too much. At the time, I remember thinking this was a strange complaint; thinking, after all, is how we solve problems. It's what separates us from animals; it has enabled all the progress (and, granted, a lot of the problems) that we experience today. Without thinking, we wouldn't have modern vaccines, computers, space flight, air conditioning, or any of the other modern conveniences that have made life livable.

Bear with me. This will be pertinent in a moment.

I recently went to a couple of nostalgia-based concerts. By which I mean, a couple of bands from the 70s and 80s were performing live, and the Dork Spouse or I wanted to see them, so we bought tickets and enjoyed listening to some music from our childhood.

Both concerts were performed in casinos. Aside from a short time at a family function hosted at a casino many years ago, I had never before been in a casino in my adult life. As I walked through the casinos to get to the events hall where the concerts were held, I found myself contemplating the nature of gambling and the people who play these sorts of games.


One of the things I found myself thinking was that there's a definite parallel to be drawn between casinos and board game cafes. In both, you are paying to play games provided by the establishment, with the option of eating and drinking as you do so.

But the similarities seem to end there.

Let's look at this a little more closely, and see what we can make of the comparison between gambling (and casinos) and board games (and board game cafes).

Contrast this with board game cafes, the largest of which is probably no bigger than a large restaurant. Sadly, information on board game cafes is harder to find, as it's a very new phenomenon; casinos have existed in some form or other for thousands of years, whereas board game cafes have only sprung up in the last couple of decades. For this reason, it's hard to compare them in the same way as you can compare casinos. No information on gaming space appears to be available. If any of these cafes have information even on how many tables they boast, I do not know where to find that information.

Regardless, even on the busiest nights, it seems that it's still easier to move around in a board game cafe than it is in a casino. Despite the small space, few people are blocking the passageways at any given moment (or, in fact, perhaps because of the small space; the limited area means there's not as much need to go anywhere, so there's less need for people to be up and walking instead of at a table).

Another difference is that casinos appear to be one of the few public spaces in Oklahoma where indoor smoking is still permitted. The Dork Spouse and I both reeked of tobacco after our time in the casinos (and that's just walking through the gambling spaces; the event space where the concerts themselves were held were still non-smoking).

The biggest difference, obviously, is that games in casinos are all forms of gambling, whereas in a board game cafe, it's not about gambling at all. It's about games where your decisions matter, and affect the outcome of the game. Mostly, at any rate...

And that's the thing I don't understand about casinos. I fail to see the appeal of gambling. I'll grant that some of the games themselves can be fun, but the concept of gambling...

Let me go a bit more in depth on what I mean by that. Most gambling involves no thought. You press a button or pick a number, and either your prediction comes true (seldom) or it doesn't (usually). Sure, most people who spend a lot of time gambling will insist that they have some technique that increases the odds of winning. But as long as the casino games aren't rigged, the house will always win in the long run. Mathematically speaking, the only way to win at most games is to simply be very lucky.

Ok, the amount of luck involved varies by game. Slot machines, obviously, are the most luck-dependent games; pull a lever or press a button, wheels turn, and either they land on the winning combination, or they don't. The only decision is how much to bet on each spin. Higher bets have a greater payout. But it still boils down to guessing: are you lucky enough to predict where the wheels will stop?

Roulette is similar: the croupier spins the wheel and rolls the ball, and betters are simply trying to guess where the ball is going to land. There is some level of decision made in this game; are you going for the higher risk of betting on a specific number? Or will you play it safe and bet on a colour (and get a lower payout in the event of a win)? Still just a case of luck.

Craps is slightly more complicated; betters wager whether the shooter (the person rolling the dice) will win or lose. The better wins instantly if they roll a seven or eleven; they lose instantly if they roll a two, three, or twelve. Otherwise, the number they rolled becomes the 'point,' and the shooter must roll again until either they roll the point number again (in which case they win) or they roll a seven (in which case they lose). Even so, it basically boils down to players guessing at which way the dice are going to roll.

Blackjack has some greater level of player agency; players must decide whether to hit or stand. But even in this game, mathematics is the final arbiter; in the long run, the house always wins as a result of statistical probability and the law of averages.

Only poker has any real value as a game, in my opinion. Sure, there's some luck involved, but ultimately, it's a game of skill (mostly involving bluffing). However, poker is such a small part of what casinos do, it's almost not even worth mentioning.

I know there are other casino games, but these are by far the most well-known, and we've already spent a lot of time on them. So let's move on to

I will grant that there are a lot of games that are luck-based; Zombie Dice is a perfect example. Any 'push your luck' games are largely luck-based, in much the same way that many casino games are. You can make decisions based on mathematical probabilities, but it ultimately comes down to the roll of the dice or the draw of the cards.

But most board games are more about strategy and skill than they are about random chance. Even those games that involve elements of luck, such as dice rolls or card draws for aspects of the game, in many games, those random elements don't usually determine the outcome. They affect the outcome, but winning is normally a result of players' decisions. Except when they don't, but the majority of games (especially modern games) fall closer to the 'relying on player agency' end of the spectrum than the 'no player agency' end.

And this brings me to my point. It seems to me that, with the exception of poker, casino games only real draw is that there is a chance to win money as a result of playing them. Contrast this with board games, which don't offer any lasting tangible benefit to winning (unless you're involved in a tournament, but even then, the payout is both vanishingly small compared to the possible winnings at a casino and takes a much longer commitment in terms of time and energy), but does offer the benefit of 'a pleasant stretch of the brain muscles,' to say nothing of time spent with friends (or making new friends).

And I don't understand how people can spend hours in front of a machine hitting a single button over and over and over again when they could be sitting at a table making careful decisions that will strongly affect the outcome, and result in pleasant social connections even if you lose the game. Heck, even video games involve decision making, skill, and memory, which is more than can be said for gambling.

Which wouldn't bother me nearly so much if the gambling industry hadn't somehow managed to convince so many people that sitting in front of a slot machine every weekend was an enjoyable activity.

Anyway, this was a bit of a rant, perhaps more than I meant it to be, but I think I have adequately expressed my opinion on the subject. So I will see you back here next week, when we will continue to

Email ThisBlogThis!Share to TwitterShare to FacebookShare to Pinterest
Labels: board game, board game cafe, casinos, gambling