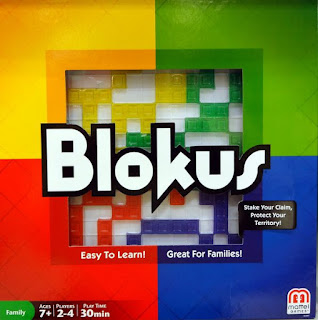 In the midst of the revolution in which a number of amazing companies produce some amazing new games and many small companies produce many more amazing games, it's easy to scoff at the large 'mainstream' companies who continue making games which are intended to appeal to the general public instead of the board game community. But that doesn't mean that some of their games aren't really good.

This is the case with Blokus (pronounced BLOCK-us), created by Bernard Tavitian and published by Mattel. Though it bills itself as a family game, it holds a surprising level of depth and strategy. It is a refreshingly thinky game that is easy to learn and play, but contains intense tactical challenges.

But let's not get ahead of ourselves! We'll start as we always do, with the numbers:


An overview of Blokus 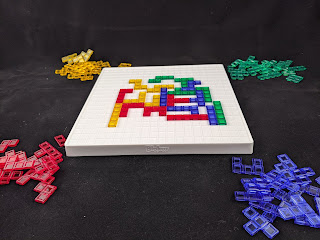 The game consists of a white plastic board with ridges to form a square grid and four sets of plastic pieces, one each in red, yellow, green, and blue. These pieces are tetris-like shapes formed from one to five squares. These pieces fit onto the grid of the main board. Players take turns placing their pieces on the board trying to use as many of their pieces as possible. The first piece goes in the corner, and all subsequent pieces must touch one (or more) of their own pieces, but only on the corner. None of your pieces are allowed to touch along any side; only on the corners. Note that there is no restriction on touching other players' pieces; you are free to place your pieces adjacent to any other colour. Only your own pieces are restricted to touch at the corners.

The game is a simple abstract strategy game. You want to place as many of your pieces on the board as you can while preventing the other players from placing all of theirs. At the end of the game, the player with the fewest squares not on the board is the winner (note that this counts the squares, not the pieces; thus, if one player has a single piece remaining at the end of the game, but that piece is made up of five squares, and another player has two pieces remaining, one of one square and one of three, the second player wins, because even though they have two pieces, the total number of squares of those two pieces is four, which is less than the single five-square piece the first player has).

Obviously, this is not an ideal arrangement. To offset this, there are a number of fan suggestions online which describe an alternate board setup. For example, there is a sequel to Blokus called Blokus Duo which has a smaller board intended for two players. Many fans choose to use pieces from an unused colour to mark off a smaller section of the board for use with base game instead of having to buy a separate game set to play with a different number of players. 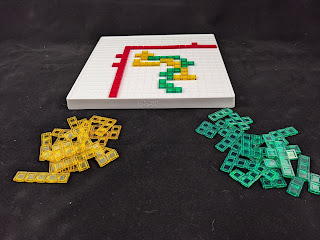 In addition, there is Blokus Trigon, which is the same game, but with pieces made of triangles instead of squares, played on a hexagonal board. There's also Blokus 3D, which is based on cubes in three dimensions, and a few weird spinoffs like Blokus Dice and Blokus Junior.

I was surprised to find how much I enjoyed this game. It's just the kind of abstract strategy game I like, especially as it's based on spatial reasoning, which is a skill that I enjoy using.

But let us not forget to consider the six characteristics of a good game:
See? All six! Must be a good game!

Ok, sure, not everyone is going to like it. And that's fine! As long as you make your decision based on decent information, which I have tried to provide for you. So go forth, play some awesome games, and remember to