This week we have another board game review, this one being an entry from the PinkFae Archives. This article is a review of the game Kingsburg, and it was originally published on 17 July 2016. 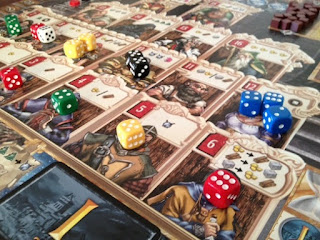 There's a game called Kingsburg that I've played a few times with the local tabletop gaming club. It's been a while since I've been able to play, which is a shame, because I really enjoy this game. So I think the time has come to review it for all my fine readers out there! We start, as always, with our ratings.


An Overview of Kingsburg


Players are lords of the realm, working with the king to build the city and defend it from invaders. To do this, they must influence the various members of the king's court in order to acquire resources. Players spend these resources to construct buildings and hire soldiers. The game takes place over five rounds, called 'years.' Each year has three building seasons (spring, summer, and autumn) and a fighting season (winter). Players score victory points based on their buildings as well as other sources.

Kingsburg is a worker placement game, but it has an interesting twist on the usual worker placement mechanic. Instead of simply placing tokens on the various action spaces, you roll dice to see which spaces are available to you. You then place those dice directly on the spaces.

The majority of the board is a series of spaces representing members of the king's court. There are eighteen people in total on the board, numbered from the lowest (the lowly jester, at 1) to the highest (the king himself at 18). Along the edge is a victory point track. At top left is a military track. The top right contains a space to hold the reserves of all three resources (wood, stone, and gold). Along the bottom is a year track and a space to hold the cards representing attacking enemies.

In each production season (spring, summer, and autumn), all players roll three dice. Players take turns in ascending order of totals. They take turns placing one or more of their dice on the spaces to indicate which courtier they're influencing. However, the dice placed must equal exactly the number of that space. Players receive the resources offered by that courtier.

For example, Bob, Susan, Nicole, and Tina are playing Kingsburg. In the first year's spring season, Bob rolls 1, 3, and 5. Susan gets 2, 2, and 4. Nicole gets a 4 and two 5s. Tina rolls 3, 4, and 6. Susan has the lowest total, so goes first. She can place all three of her dice on space 8 (the treasurer, which gives her two gold), one 2 and one 4 on space six (the alchemist, which lets her trade in one resource for one each of the other two; i.e., one gold for a wood and a stone), the single 4 on space 4 (the merchant, granting her one gold or one wood), or a single 2 on space 2 (the squire, giving her one gold).

After she's taken her turn, Bob goes next (because he's got the next highest total). Once everyone has taken a turn, any players with dice left go again. Repeat until everyone has placed all their dice.

The important thing to remember is that each courtier can only assist one player each season. This means that once there are any dice on a space, no player can place more dice on that same space. So in the example above, if Susan put her two 2s on the 4 space, she wouldn't then be able to put her 4 anywhere, because there were already dice on the 4 space.

Once you've received all the resources from the courtiers, you have an opportunity to spend them. Most resources (wood, gold, and stone) are spent to construct buildings. Some buildings give you victory points. Others give you military bonuses. Others grant you special abilities. Still others augment resources that you receive on subsequent turns. Each player has a player mat that displays the buildings available to build. All the buildings shown on this mat are the same, but at the beginning of the game, players take a strip that they place over one row on their own mat. This changes the buildings available in that row. In this way, players make the mats slightly different from the others'.

There are other resources available, however. Some courtiers grant you military strength. This allows you to move your military mark up on the strength track at the top of the board. Others allow you to look at the incoming army card. Some give you a token that allows you to add two to the result of a single die on later rolls. And still others grant you a victory point.

After everyone has placed their dice, received their resources, and built any buildings they want/are able, the season finishes with its special bonus. In the spring, the player with the most buildings gets a bonus victory point. In the summer, the player with the fewest buildings gets an envoy token. The envoy token allows that player to build two buildings in a season, or to place dice on a space that already has dice on it. In the autumn, players may spend two resources to recruit soldiers, increasing their military strength by one.

Once the winter season has arrived, players reveal the top card of the invading army deck. This can be anything from a horde of goblins to a swarm of dragons. The card has a strength rating, which players must overcome. Players roll a single die, and add the result to the current military strength of all players. Everyone who exceeds that  value receives the benefit listed on the card. Players who have a lower value suffer the listed drawbacks. Ties have no effect.

Once the combat is resolved, the player with the fewest buildings gets a bonus die to roll in the next season. The season marker is reset, the year marker is advanced, and play continues.

At the end of year 5, the player with the most victory points claims the victory.

Although this game is definitely a worker placement game, the unique mechanic of rolling dice to see which spaces you can choose is a really enjoyable twist. Players get better results when they roll high, but the game is set up to offset the disadvantages caused by rolling low. This means that, unless a player rolls poorly for the entire game (which, let's be honest, I have seen happen), you're not as likely to curse fate for your inability to be effective. This helps to overcome the usual problem I have in games that rely on luck (specifically, the knowledge that no matter what you do, you can't win because the results are literally out of your hands). So I find that this is a truly enjoyable game. I recommend it.

But as always, don't take my word for it! Look at my ratings, read the description, and try it yourself! Until then, remember as always to