I don't back many projects on Kickstarter. There has to be something extra appealing about it before I will throw money at it. But there has been just such an example fairly recently, and I finally got my copy of it not too long ago. And today, I will review that game for you. So here is my review of: Swordcrafters. 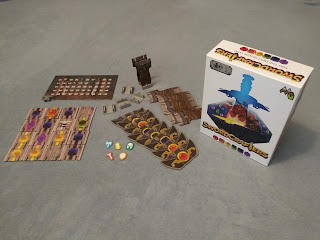 I was intrigued by the game's primary premise: you are constructing a three-dimensional sword out of two-dimensional tiles. It sounded like an interesting mechanic, so I had to give it a chance. I became a backer, and I have not been disappointed.

But let's not get ahead of ourselves. Here come the numbers:

Whoso pulleth this sword from out this game box shall be...

Sorry about that. Too much Athuriana in my background.

Anyway. So the idea behind this game is that you want to claim the tiles that will score you the best combinations whilst denying potentially high-scoring tiles to other players. With these tiles, you craft a sword (because the game is Swordcrafters... get it? Yeah, I'm probably not doing well with the comedy. I should give it up) that totals a higher score than the other players. Here's how it works:

Each player receives a hilt (the 'handle' of the sword). This is two appropriately-shaped cardboard tiles inserted into a 'pommel,' a base which allows you to stand your sword on end during gameplay. Each player also receives two crossguards, which are slotted into the hilt. This gives you two free gems to start your sword. 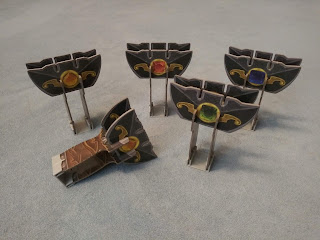 In the centre of the playing area is a four by four grid of sword tiles. The second tile in the third column is replaced with the Forge tile, which grants the First Player token for the next round to the player who claims it in this one (if it's not claimed, the First Player token passes to the left). Note that, if there are fewer than four players, the bottom row of this grid is removed.

Players each take one turn to make a 'cut.' That is, they separate one of the groups of tiles in this grid into two smaller groups, along a straight line. The first player in each round obviously will do this in the grid of tiles as a whole, but subsequent players must choose a single group of tiles to cut. Cuts may not turn in the middle of a group, nor may they cross multiple groups.

The idea here is to try to manoeuvre it so that you get tiles of high scoring value whilst leaving little for the other players. But the other players are doing the same to you, so you have to be careful where you cut that you're not potentially hosing yourself.

This is where the game gets really thinky. Deciding where to make your cut can actually be a pretty difficult choice sometimes, for precisely the reason listed above!

Once each player has made one cut, each player then chooses any one group of tiles on the board. It's not always the best idea to take the largest group; although you do score for sword length (i.e., having more tiles in your sword than other players), you also score for certain colour combinations. Also, some tiles have no gems, and avoiding these is usually a good idea. So taking a smaller group can sometimes be wise.

There will always be one group left unchosen. The tiles in this group are discarded. Players then place the tiles they've claimed in their sword as they wish. Once they've placed them, though, they cannot be moved, so place carefully.

Here are a couple of swords in progress: 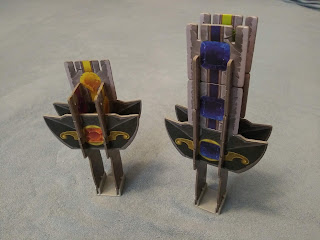 After six rounds, when there are no longer enough tiles to form a new grid, players score their swords in three ways: 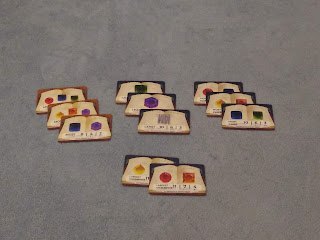 The player with the highest point total is the winner.

That's just one way that Sword Magic cards can work. Some give points for having the fewest of a certain colour, or the most pairs of certain colours, and so forth.

Additionally, I got the Expanded Edition. This basically came with three mini-expansions, which can be added on to the base game, mixing and matching as you like. If you do use any of these mini-expansions, you also have the option of leaving out the Sword Magic Cards. The additional options include Sword Tips, Relics, and Mastery.

At the beginning of the game, the players are dealt two random sword tip tiles. Each of these can be added to your sword at the end of the game, and score extra points based on the criteria listed on them. For example, one tip grants you eight additional VP if one side of the sword contains at least three orange tiles, one purple tile, and one red tile.

Plus, and in some ways (to me, at least) more importantly, it adds to the aesthetics of the game by giving the sword a more finished look. See this photo (granted, it's pretty short, but I just wanted to throw something together so you could see what I was talking about): 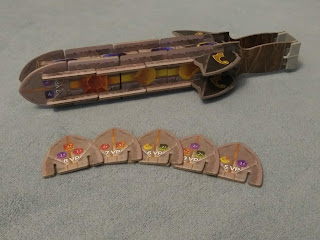 Deal out a row of six of the Mastery cards at the beginning of the game. Each of these displays a monster that may be defeated if your sword has a specific colour combination. During each round, add an additional phase after Phase 3: Assemble Your Sword. This is Phase 4: Mastery. Each player, in turn, may claim a single Mastery card if they meet the criteria. Here are a few examples: 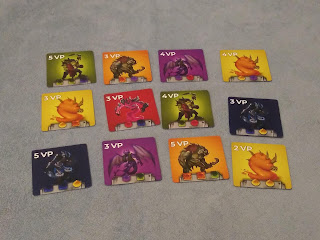 So, for example, if you have two adjacent orange tiles with an adjacent green tile, you could claim the orange card in the bottom row (which lists orange-orange-green on the bottom).

Once each player has had an opportunity to claim a card, replenish the display from the deck and go on to the next round. Add the point values from any claimed cards to your point total at the end of the game.

When setting up the grid of sword tiles, replace the four corner tiles with Relic tiles. Here's a picture of a sword grid with four Relic tiles in place: 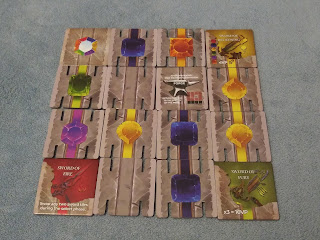 These are claimed along with the rest of the tiles during the normal process of Phase 2. Relics may include wild colour tiles (the multi-coloured hexagon in the top left of the photo above), which are immediately exchanged for a sword tile of the colour of your choice. They may also be single use items, like the Sword of Fire in the lower left of the photo above, which may be discarded to swap any two sword tiles during Phase 2. Or they may be victory point cards, as is the case with the Sword of Fury in the lower right in the photo above. That one is worth 10 VP if you have three of them at the end of the game.

I was intrigued by the innovative mechanic involved in creating this game. I was very pleased to finally receive my copy, and even more pleased to get to play it the first time. It's fun, it's got some depth, and best of all, it's wonderfully tactile. No matter whether you win or not, it's just lots of fun to get to hold this replica sword at the end of the game. Sure, it's not super pretty, as far as swords go, but considering that it's built entirely out of cardboard tiles, I'd say that's acceptable.

Plus, it's got very little language dependency (especially if you aren't using the Relics expansion), so it can easily cross borders and be played with very young players; my friend John's son Finn is very bright for his age, and plays a lot of 'adult' games that involve little to no reading, so he may not be the best measure, but he picked up the rules very easily. He didn't score well, so he needs to work on strategy, but I'm sure that will come with practise. In fact, here's a photo of my first game, with the two of them: 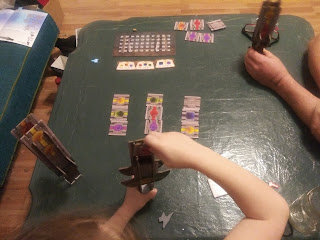 But let's look at the ultimate gauge: the six components of a good game.
Another game that meets all six criteria! You KNOW we've got a good game here! Sure, it may be a bit lighter than some players expect; it's never going to compare to, say, Agricola for depth and strategy. But then, they don't always need to, do they?

Anyway. I know I got a little empassioned about this too, for which I apologise. But hopefully, I've given you a good enough overview of the game that you can decide for yourself if you want to try it. I hope you decide to give it a chance, and whether you do or not, I hope you never cease to