Board Game Review: Near and Far (Part 1)

Oh my goodness, guys, I am so excited for this week's entry. I've been waiting for this entry for a long time! I tend to write my entries weeks in advance, mostly so that if I'm busy during a week, I don't miss posting. But that means if something really neat comes along, I have to wait a while until I have a week with no entry posted before I can say anything about it. So I've had to wait for this one.

One thing you may notice about this entry is that it's listed as 'Part 1.' That's because there is so much I want to say about this game, I've decided that I'm going to do it in two parts. Today's entry, part 1, will be an overview of the game itself. Next week, in part 2, I will discuss my thoughts on the game. And that's the part that's going to take some time to get through. Because there's a lot to be said about how I feel about this game. 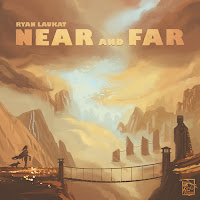 This week, I am going to start reviewing the game Near and Far. As always, we're going to start by looking at some numbers. And as always, here's the chart that tells you what those numbers mean:


An Overview of Near and Far

This game is a sequel to Above and Below. I will admit that I haven't played Above and Below. But I have a good friend who I'll call Caroline that bought Near and Far, and told me that I'd probably love it. So I played it. We did it in campaign mode. Which means we played out the entire story over the course of ten games. But there are other ways to play it too...

The premise is that four adventurers are seeking the Last Ruin. You will recruit companions, acquire items, and explore the country as you encounter stories which ultimately lead to the final chapter.

The game consists of a lot of bits. The three main parts are the board that represents the main city, the book of maps, and the book of story encounters. You place the encounters book nearby where it can be easily accessed, and place the other two items in the centre of the table. Each player gets a play mat, a standee, some cards, a few gold coins, a bunch of tent tokens, and a pet (you can choose a dog or a cat). The play area will likely look something like this: 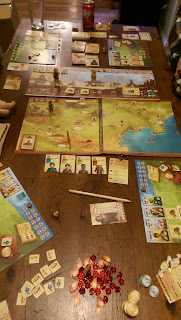 On your turn, you may go to any location in the town. Locations grant you various options; you may acquire money, gems, faction tokens, noms, equipment, pack animals to carry that equipment, reputation, or you can hire companions. Alternately, you may leave town to explore the surrounding area. In this case, you move your standee to the current map in the book of maps. When leaving the town, you start by placing your standee on the town marked on the current map, and then you may follow any of the trails marked on the map to the various locations. Here's a closer view of these two primary items: 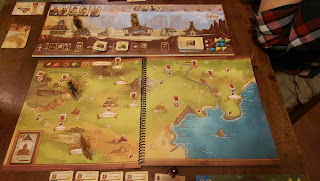 There are eleven total maps in the book, so there's always something new to explore. As you move around the map, you can set up camps, encounter bandits, earn gems or coins, and most importantly, go on quests. In the picture above, you'll notice that many of the locations marked on the map have a book icon. If you land on one of these spaces, you consult the appropriate section in the encounters book.

The encounters book describes a scenario that you find at the spot on the map where you happen to be. You are then presented with a choice of what you can do in that situation. Usually, you're required to make a roll to see if you succeed in your chosen action; if you fail, you simply don't get the reward. If you succeed, however, you gain some sort of bonus (gold, noms, gems, faction tokens, etc).

Players proceed to explore the map, and will occasionally place one of their tent tokens on the map, or the town board, or a card, to indicate that they've set up camp, or defeated a bandit, or certain other actions. Using the last tent on one player's board triggers the game end, and victory points are scored.

Some actions will result in interesting new storylines opening up to you. Some of the encounters in the book will list a 'side quest' or give you a 'key word.' If you complete a quest that lists a side quest in the rewards, then the next time you land on a quest space, you will turn to the side quests section of the book and complete the encounter listed there instead of the normal encounter for the space on which you've landed. Other quests grant you an additional option in your list of available actions if you possess a certain key word (for example, one player completed quest 23 and earned the key word 'copper.' Later, when that player landed on the space for quest 31, she was given a third option in addition to the two basic ones as a result of having the key word 'copper' that she had earned earlier).

There's not a lot of interaction between players. If two characters visit the same location in town, with the exception of the saloon, they must duel. If the first player wins, the second player is sent to jail for the remainder of that turn. Otherwise, nothing happens; the second player may take the action on the space as normal. The only other interaction between players is when the player to your right reads the current scenario from the story book when you land on a quest space.

Instead, players recruit adventurers from the saloon to join their party. These adventurers grant certain benefits, like the ability to ignore bandits, increased skill and/or combat rolls, and the like.

Each tent token you place, either on the map, the town board, or a card, grants you a victory point. You also earn points for purchasing artifacts. Points can be gained for a handful of other activities as well, such as having three pack animals. Once a player uses the last tent token from that player's mat, complete the round so everyone has an equal number of turns, then compare victory points. Whoever has the most wins.

We played in campaign mode. In this mode, you play each map in order, and your character gains experience points from quests, which can be spent to purchase special abilities. Companions and equipment are reset at the beginning of each new map, but certain conditions affect later games (for example, the player with the fewest victory points at the end of one game has the option to have a platypus as a pet in the next game). The encounters in this mode tell a story which will eventually lead to a climactic boss fight at the end of the last map.

Alternately, you can play in character mode. Like campaign mode, you earn experience which can buy you abilities, but you aren't following an overarching storyline. Instead, you read encounters from a different section of the encounter book, so that it's not part of a multi-game story. This allows you to jump around in the maps book instead of having to do them in order.

Or, if even that's too much commitment for you, you can play in arcade mode. This is for those people who don't want any continuing story or character development between games. No experience points are awarded, and quests are drawn randomly from a deck of quest cards instead of read from the book.

In addition to allowing you to choose how you want to approach the game, it also lets you continue playing the game once you've finished the campaign mode. Although, even if you decide to repeat the campaign mode, there are likely to be some stories that you didn't see the first time around, as a result of side quests and the like. So the game can continue to be fresh no matter what.

Additionally, the first expansion for Near and Far (called Amber Mines) successfully kickstarted in October, so should be finishing production sometime around the time this article is published, give or take a couple of months. This means there will be even more stories to play in campaign mode!

That was just an overview of how the game is played. There is still so much more to say. So, as mentioned previously, I will say the rest of it (including the 'six elements of a good game') in part 2 of this review, next week. Until then, try not to let your impatience consume you, but instead, continue to

Email ThisBlogThis!Share to TwitterShare to FacebookShare to Pinterest
Labels: board game, Near and Far, photos, review