This week's entry is a very special PinkFae archive. It's my first game designer interview, and even better, it's an interview with my good friend John Trobare. This interview was first posted on 19 March 2016, not long after he had successfully published his game Asphodel through Kickstarter. So let's get right into it! 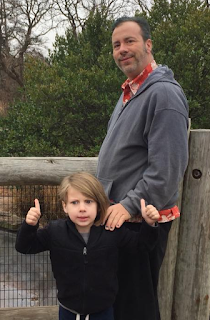 My good friend John Trobare is an accomplished individual. He created the game Asphodel, which he self-published last year through Kickstarter. In addition, he opened his own pizza delivery business two years ago. All this in addition to being a devoted father and husband, and playing games several times a week, including annual trips to the Geekway to the West convention in St. Louis.

I decided to interview Mr Trobare for this week's entry. So one Sunday evening, we sat down with some family and friends to talk over dinner.

PinkFae: Let's start with your earliest experiences. I'm sure you played things like Candy Land when you were a kid.

John Trobare: I don't think so. I played chess with my Dad. He taught me to play chess when I was about three years old, and I played backgammon with my mother and Scrabble with anyone who'd play Scrabble with me. But I don't think we ever played Candy Land or any of that sort of thing. I learned to play Pente when it came out. It was shortly after I started 6th grade that I discovered games like Risk and Stratego. Sixth grade is also when I found D&D. Played D&D for most of sixth grade, and then decided that there must be something better. Played Villains & Vigilantes for a while, liked it, but the system is basically just a rip-off. Never played D&D again for almost 20 years.

PF: I have many fond memories of gaming with you back in the 90s.

JT: Jimmy and I used to play Dungeons and Dragons together back in the early 80s. The late 80s, I discovered games like Warhammer 40K, and there goes several thousand dollars. John Blizzard introduced me to tabletop miniatures gaming. It can be very expensive, and some of them, games like Confrontation or AT-43 have that power creep that you see in games like Magic, which I've completely sworn off of anything that does that. Where it has new stuff that comes out every few months that you have to buy if you want to be competitive. AT-43 was really bad about it.

PF: I also remember many hours sat around places like The Kettle brainstorming ideas for new roleplaying games.

JT: I have written several of them. None of them have ever been published. I've never gotten through more than, like, a hundred pages before I get distracted and do something else. I'm going to blame some sort of disorder of the attention deficit variety for that. I've taken games to game design competitions, but always board games or card games. I'm working on publishing a new one in the near future. I've been doing a whole lot of art and card design, and soon going to enter the playtest phase.

PF: I imagine this will be a bit of a departure from the last Trobare game, Asphodel.

JT: Yeah, that was a really good time, and I learned a whole lot about publishing by going through the whole Kickstarter process. It was cool. This is going to be way less abstract, I think. Ratteries is the name of the game. It should be a short, forty-five minutes to an hour romp through rat breeding.

PF: Any hints on what to expect in this new game?

JT: A trick taking mechanism to move into a tableau building game that's sort of like an engine builder that allows you to try and get the most victory points. Or perhaps we could go the other route and say, 'It's a game about breeding rats.' The idea's been bouncing around for a while and has taken a couple of different forms that have been thrown away. 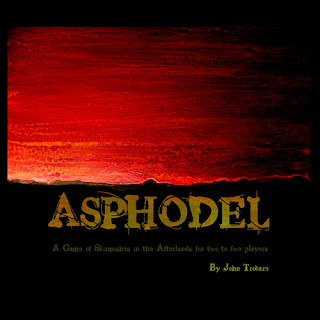 PF: With Asphodel, you decided to self-publish. Had you looked into possibly getting a company publish for you?

JT: I did not, much. I talked to a couple publishers and then decided that Kickstarter was the best way to see if there was enough interest. I did, however, playtest with other game designers, which was a really good experience for Asphodel and made it a much better game. I got some really constructive input playing with the guys who designed Heroes Wanted. And I played Asphodel with the guy who designed Discount Salmon. Changed around the cards a lot after playing with those guys. Very useful. And I talked a lot with the guy who created Euphoria.

PF: So you're a man that wears a lot of proverbial hats. Father, husband, business owner, game designer... how do you see yourself?

JT: Well, that's a good question. I see myself as trying to enjoy life and make life better for the people around me. Just being generally creative helps keeps me sane, but hopefully other people like what I do. 'I didn't make it for you.' That's really the long and the short of it. I try to make the world, at least, not worse for the people around me, and I try to provide positive stuff for other people to do. But in the long run, really, I have been painting and drawing and writing and doing that sort of thing since I was very small, and I would probably continue doing it even if no one else liked it.

I really like the ability to play a game that takes three or four hours and having everybody get together around the table, and has no electronics or distractions. My favourite board games are board games that have pleasant integration of theme and mechanics. Coming up with a favourite board game is almost impossible, because one of the primary factors in whether or not a board game is good is who you're playing it with, and different people require different somethings to play with. I love playing Kingdom Builder. It's a good game. It wouldn't be my favourite game on its own, but the fact that my wife and children love playing it certainly makes it a favourite. 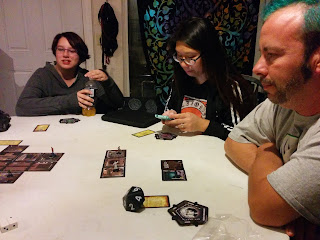 PF: So what does the future hold for John Trobare?

JT: I always look forward to the future holding anything. I never thought I was going to make it this far. So being here and now, doing this, this is all bonus points. I have designed several games that I may or may not refine and polish and publish at some point in the future. The first game that I actually published in any real quantity was an incredibly big learning experience for me, and I loved it. I love going to the game store and seeing people play the thing that I made. The whole process was a really enjoyable stretch of the brain muscles.

PF: Anything else you feel needs to be said before we wrap up?

JT: I would encourage anyone who wants to try and publish a board game, card game, or roleplaying game to spend some time talking to other people who have already done that. Also, don't be terribly attached to any particular aspect of what you're doing. I have taken, what, four or five games to game design competitions at various conventions, and there are often aspects that you'll think are really neat, and it just doesn't work, or it doesn't click with people, or else you need to scrap everything else to make it work. If you're writing a novel, if you're making a game, any sort of creative project you're working on, but especially game design, where you're so interactive with other humans, being overly attached to a cool idea to the detriment of the holistic thing is an easy trap to fall into.

And not everyone likes every game. I have a very good friend who just hates deck building games. No matter how nice or pretty the deck building game is, they're probably not going to like it. Whatever mechanic you're doing, there's probably somebody who's going to hate what you're doing purely on the basis of it's that kind of a game. Like any other aspect of life, whenever you encounter somebody who just hates what you're doing purely on the basis of what it is, just remove them from the equation and don't worry about it. Haters gonna hate. If somebody tells you they don't like your game after the first time they play it, I mean, take a minute to say, well, what don't you like? And if they say, 'Well, I absolutely hate roll-and-move games, and I hate snakes, and you've got a game here about roll-and-move in order to fight off a giant killer anaconda. It sets off all my triggers, and I hate it.' Well that's not your fault. You didn't make a bad game. You didn't make a thing that sucks. You just happened to playtest it with somebody who is phobic of whatever you're playing, or hates that particular mechanic, or whatever.

Also, often a great multi-player game becomes less playable when you add more players or try to make it a two-player game. If you have a game that plays great with four players, try actually playing it with five before haphazardly adding more players. Many modern board games have a two player option that adds extra rules, proxy players, and special bits. In my opinion, most often these games lose the weight of the multi-player version. There's no shame in admitting your cool idea works best with just two, or with three to five, or whatever.

PF: Well, Mr Trobare, it has been a most enjoyable conversation. I look forward to seeing what the future holds for you.
Posted by The Game Dork at 08:00