The first thing that we had to do was draught artifact cards. We have a hand of five cards, which we draught on a pick-and-pass basis. The first card I picked was the Gnarled Fiddle.

The main reason I chose this card was because I was playing Grear. 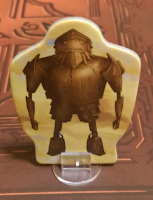 I was drawn to the image of the clunky artificial creature lumbering around the countryside having adventures. I'm not entirely sure what Grear is; the rules don't include a story or background (at least, not that I've found). But when I saw the Gnarled Fiddle, my imagination suddenly went wild with visions of this hulking automaton playing a crudely-crafted violin. And in that very moment, I had a fully developed personality for Grear.

In all the games we've played, I have remained true to the character. Grear is gruff but endearing, lovable but naive, kind-hearted but somewhat bumbling. And every decision I have made in the game is based on that idea.

The first quest I attempted had Grear stumble across a door built into the side of a mountain, chained shut with heavy iron links. Opening the portal to see what was inside, Grear encountered someone that had been locked away years prior. I was given the option to either help him escape, or to try to reseal the prison with the person still inside.

I, the player, could tell that this person was obviously a major villain of some sort. But Grear's personality was speaking to me: 'How cruel of those people to imprison you away here. Grear will set you free!' So I helped him escape.

This started me on a path of several subquests where I had to rescue people from the evil warlord whom I had released. And it wasn't the last time that happened; in several of the games we've played, the innocent and too-trusting Grear has freed a number of villainous beings, and it has become a common refrain around this particular gaming table for someone to say, 'Grear, stop freeing the bad guys!'

Here's the thing, though: as much as I've been having fun moving Grear around the maps exploring stories and fleshing out the adventures he's having, and reading the quests to Caroline when she lands on a quest space, and naming the companions that join Grear's adventuring party (seriously, I have a slip of paper with the names of all the adventurers that have been on Grear's team, and if ever I hire someone in a game that I'd hired in a previous game, I remember the name I gave to that character and welcome the character back to my team as a long-lost friend)...

...and I lost all but two of the games we played, but I don't care, because I'm having so much fun speaking in Grear's deep husky voice and arguing with his companions when they are triumphant in combat because 'violence is not Grear's way' and adding to the tall tale that is this kind-hearted but slightly simple robot/golem/creature....

...that's not the only way to play the game.

Caroline's wife (I'll call her Gemma) won most of the games we played. She did this by playing somewhat strategically. She carefully recruited companions with martial prowess, then roamed the countryside defeating bandits. She did some quests and a few other things too, but she quickly used up all of her tent tokens with defeated enemy cards, which ended the game and scored her a sizeable number of journey points (the game's term for victory points). And since part of campaign mode is recording how many points you earn each game so that you can have a grand total at the end of the campaign to determine an overall winner of the campaign as a whole, this meant that she was the grand champion at the end because she had so many points from winning most of the games. She had fun, but she had fun in a completely different way than I did.

Caroline had fun because she was spending some time playing an enjoyable game with good friends.

And the Dork Spouse told me later that she had fun playing with the game's beautiful components (the replica gems, in particular, are really nice).

That's the magic of Near and Far. It has something for everyone. Sure, it's not as strategic as, say, Twilight Imperium (which, incidentally, the guys over at Shut Up and Sit Down freaking adore) But it's got enough strategy that if a person who loves the strategic games wants to find a game to play with someone who doesn't like strategic games, Near and Far can accommodate you. It satisfies everyone, at least to a reasonable degree. And that is what I love about this game.

Don't get me wrong, it's not perfect. The two main gripes that I have are:
But, that aside, I think this game delivers. Strategic gamers will have more strategic games that they prefer. Roleplayers can find more roleplay-intensive games. Competitive players will find games with more direct competition. But I have yet to find a game that so elegantly brings the needs and desires of all these disparate types together in one game.

And with that, we'll cover the last point before wrapping up this two-part review: the six elements of a good game.

By the time we'd played it the second time, we were quite familiar with the rules, and by the end of the fourth time, the strategies were fairly well known to us as well. But the 'how to play' video was thirty minutes long, because there was just so much to cover.

Now, as you probably know, I usually try to avoid describing my opinion of a game in great detail, because I like to let my readers make up their own minds. But I have been enjoying Near and Far so much, and besides, as I said above, it is so uncommon to find a game that brings distinct types of gamers to the same table fairly easily and fairly well. So in my opinion, this game is well worth it.

But even with all of that, I still recognise that it's probably not for everyone. And you know what?

So whatever you think of this game, I hope you will continue to

Email ThisBlogThis!Share to TwitterShare to FacebookShare to Pinterest
Labels: board game, Near and Far, photos, review, Shut Up & Sit Down