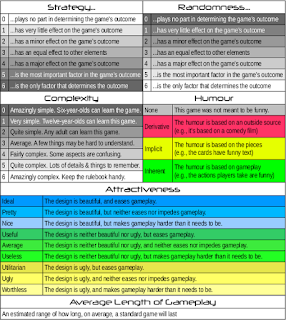 I was thinking about Dixit the other night, as a result of playing the game Mysterium. The latter was described to me as a combination of the former with Cluedo (or Clue for my American readers). This reminded me of one of my favourite board games: Balderdash. For those that don't know how it works, Balderdash has a set of cards, each of which contains five words that can be found in at least one English dictionary, but are not commonly known. This includes words like 'quincunx' and 'coprolite.' Players take turns as the 'dasher,' who reads off one of the words on the card. Everyone (including the dasher) writes the word on a slip of paper. The dasher writes the real definition of the word on his paper (the real definitions being provided on the back of the card), and everyone else makes up a definition for this word. The dasher shuffles all these papers together and reads out all the definitions. Everyone else then takes turns voting for the definition that they think is the right one. You get points for guessing the correct answer, and also for each person that voted for your own answer.

Dixit is essentially the same, but instead of making up definitions for words, you're coming up with simple (one to four word) descriptions of paintings. The cards are lavishly illustrated with elaborate artwork, often somewhat surreal in nature. Players take turns as the 'storyteller,' who chooses a card and gives a short description (something like 'Memory' or 'Loneliness' or 'Lost in the storm'). The other players then choose a card from their hands that they think can also be described by that word or phrase. All these cards are shuffled together, and players must choose which one they think is the storyteller's.

'You all meet in a tavern...' so runs the cliched beginning of a great many roleplaying games. Even those that aren't set in a fantasy setting still have the PCs meeting up in a similar location (a dive bar for Shadowrun, just as an example). This trope is so overused and so well known that there are counter-tropes starting to show up. One example is the Giant in the Playground (the website where the Order of the Stick webcomic is hosted) forums, where some participants have sig files that read '78% of DM's [sic] started their first campaign in a tavern. If you're one of the 22% that didn't, copy and paste this into your signature.'

Regardless, even if the adventuring party didn't start in a tavern, the existence of the trope points to a specific phenomenon within the gaming world: PCs who begin the campaign as strangers. This is by far the most common way for games to begin. For most of my early gaming experiences, this was the norm. In fact, it was so much the norm that when my gaming group started playing Werewolf: The Apocalypse, we ignored the pack rules.

Most people who read this blog probably already know Stratego. But it's one of the games I most enjoy, so I'm going to review it anyway. That's right! It's board game review time, and this week, we're reviewing that old classic, Stratego! First, the numbers:

Strategy: 4
Randomness: 1
Complexity: 1
Humour: None
Attractiveness: Varies by version. The 'Nostalgia Series' version, which I have, I'd rank as Pretty.
Average Length of Game Play: 30 Minutes