My favourite roleplaying game has been Changeling: the Dreaming, ever since it was released back in 1995. I am among the legion of fans who was upset by the way that White Wolf neglected it after the second edition was released, before finally cancelling it right in the middle of an incomplete meta-plot story arc. But what's so great about this game?

Well, for me, the first appeal was that it was about faeries. I have been a fan of faeries (NB: the original celtic vision of faeries, as elves, goblins, trolls, merfolk, &c., not the sanitised victorian image of Tinkerbell) for some time now. So it was only natural that I should be drawn to a game that allows you to actually play one.

Secondly, I became enraptured with the game's focus on dreams and creativity. For those not familiar with the game, Changelings require a special magical energy called "Glamour," which is the force engendered by human dreams and creativity, as well as things like love and hope. Artists and dreamers generate Glamour, which Changelings can then collect to sustain themselves, as well as to fuel their Cantrips.
Read more »
Posted by The Game Dork at 01:04 No comments:

Something else I've often thought was fun was to play a character of the opposite gender. I've done this several times, and I always enjoy it. In fact, many of my favourite characters have been female. Of all the Werewolf: The Apocalypse characters I've played, I liked Michelle the best. One of my favourite Changeling characters was Sarah Storm, the piskey hacker with a sentient chimerical computer.

This probably appeals most to Method Actors, who enjoy stretching their dramatic and psychological muscles with the challenge of getting into a different mindset (and playing the opposite gender IS a different mindset; if you don't believe me, just read Sperm are from Men, Eggs are from Women by Joe Quirk and Self Made Man by Norah Vincent). Storytellers are also quite fond of the challenge, as it affords them new opportunities to develop and explore the storylines of their games. The other types may or may not be interested in trying this out, but are generally indifferent. Butt Kickers and Power Gamers, in particular, aren't likely to care, as the gender of the character killing monsters has no real bearing on whether the characters are effectively killing monsters.

But I personally think it's a great way to expand the game. There are a lot of things to keep in mind, of course. It may be hard to do this with your particular gaming group. There are a lot of stereotypes out there about gamers being reclusive geeks with no real experience interacting with women whatsoever, and so the only way they have of perceiving females is as objects of desire. Such persons can't meaningfully interact with women, and if there is a female character in the party, they're likely to say things such as, "I do her!" Never mind foreplay, developing a relationship, taking her to dinner first, et c.
Read more »
Posted by The Game Dork at 00:14 No comments:

Something I enjoy doing on occasion is playing two characters at the same time. I haven't done it very often, but it's usually quite fun when I do get a chance.

The appeal of running multiple characters differs depending on player type. Butt kickers might like the chance to kill twice as many monsters as normal. Power gamers have two paths to glory that they can walk at the same time. Tacticians have all sorts of added strategic advantages from having more than one person working on a plan. Method actors, or course, are likely to relish the increased difficulty from handling two personas at the same time. And so on.

"But, Mister Game Dork Sir," I hear you say, "Doesn't that mean you're getting twice as much action as the other players?"

Well, maybe. Obviously, it does have to be handled with care. One way of dealing with this problem is running a group in which all the players have two characters. This can be pretty advanced, and not an exercise for inexperienced gamers. Another option is to play in a group that doesn't mind one player running two characters. You may have to find just the right mix of gamers for this one to work. You can always work with the player running two characters to ensure that he (or she) is sensitive to the needs and feelings of the other players, and doesn't overshadow them with his two characters.
Read more »
Posted by The Game Dork at 11:57 No comments:

Anyway. I recently heard about the Sultan. It's being billed as the Ultimate Gaming Table. The surface is a backlit dry-erase surface, which can be covered with a custom-fit felt top. The sides are loaded with cubby holes for books, drinks, dice, pencils, et c. There are dice rolling pockets along the edges, desks that pull out from the side, and all sorts of goodness. It's currently selling for almost $10,000. 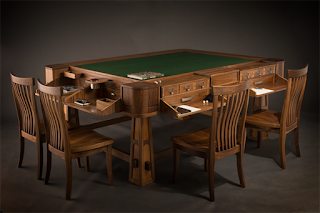