A friend of mine recently acquired a copy of Imhotep. He brought it to game night, and I got to play it. Now I shall review it for you.

As you may remember, last time I did a board game review, I added some categories based on the Quantic Foundry board gamer motivation profile tool. I have codified those into my ratings system. Here is the new one: 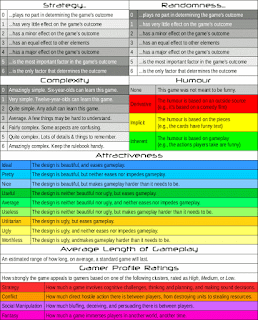 In Imhotep, players are working to build the structures in Ancient Egypt. This includes the pyramids as well as temples, obelisks, and burial chambers. This is accomplished by the use of wooden blocks. These blocks are not huge, but they are a good deal larger than the wooden cubes used as resource counters in most games. Players score points depending on what type of structure they're building.

Here's how this works. Each player has a sled that can hold up to five blocks. In the middle of the table are five boards, each one representing a different structure, plus a fifth one representing the market. Nearby are four boats. Each boat can hold between one and four blocks. There are also turn cards and market cards. The turn cards tell you which boats are available for the current round. Market cards are made available in the market board.

Here's a photo to give you a better idea: 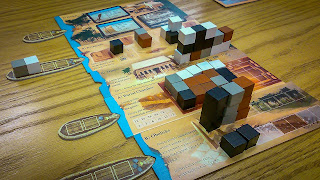 Notice that the boats in this photo have already docked with the play boards. At the beginning of each round, they start off to the side, so we don't know which boat will dock at which board.

Here's what happens. At the beginning of each round, you draw a turn card. This card has four boats drawn on it, each of a different capacity. This determines which size boats are available this round. A card may show two of capacity four, and one each of capacities three and two, just as one example.

Once the boats have been placed, players take turns taking actions. There are three actions that a player can take on his turn:

The point is to get your colour blocks into the various structures being built. You score points based on the placement of your blocks on these boards. This works a little differently for each structure:
Now, at first, this may sound like a simple case of moving your blocks from your storage sled to the boats to the boards. That's certainly what I thought when I was first learning the rules, before we began playing. However, I quickly learned that there's a lot of planning involved. Not only do you have to place your blocks on the board in such a way that your colour will hopefully land on the highest point value space on the destination board, but you also have to account for whether the other players will place their blocks on the boats in a manner that won't screw you over, and also whether the other players will choose to sail a boat to a board that will end up scoring you fewer points.

For example, at one point, I looked at the scoring spaces on the pyramid board, and decided to place a block in the middle space of the boat, knowing that whether the first space was filled with another player's block or not, I'd land either on a 3 point space or a 4 point space. I took my turn to place my block on the middle space of that boat, planning to sail the boat to the pyramid board on my next turn. However, when Player Z took his turn right after me, rather than placing one of his blocks on a boat as I had expected he would do, he sailed the boat on which I had just placed my block, not to the pyramid board as I had wanted, but to the obelisk board. Thus, instead of the three or four points I had intended, I only got a single point from that block.

And that's where the surprising level of strategy came into this game: planning your own strategic moves is one thing, but accounting for the actions of other players ruining your carefully laid plans is entirely a different situation.

I haven't mentioned the market yet, so I'll quickly describe that, at the beginning of each round, four market cards are placed here. Market cards include statues, which are worth points based on how many of them you have at the end of the game, double action cards, which allow you to take two specific actions on one turn, and bonus points cards, such as one that gets you an extra point for every stone (both your own and other players') in the burial chamber. When a boat sails to the market, the player who owns the first stone gets to pick a card from the available four. The second stone determines who gets to pick from the remaining three, and so on.

Another good thing about this game is that the boards I have described above are the basic version. Each board has an A side and a B side. Players can choose to turn over any or all of the boards to the B side, which involves a slightly more complex scoring system. For example, the B side of the pyramids board has multiple pyramids being built, allowing players to choose the pyramid into which they put their stones. On the B side of the temple board, depending on where in the row the scoring block appears, the block may either get the player two points or one point and two blocks from the supply. This grants the game an extra level of versatility and replayability.

I like this game a lot. It has very little randomness (appearing only in which boats are available each round and which market cards appear on the market board), thus granting it a very high level of thinky-thinky characteristics. The one thing I will say about this game, in terms of downsides, is that the box is much bigger than it needs to be to store all the pieces. They could have made the package much smaller and still fit everything in. But in terms of game play itself, I quite enjoyed it.

But that's just my opinion! Try it for yourself! If you're into thinky-thinky games as I am, you'll probably like it too.

That's it for this week! Until next week, remember to