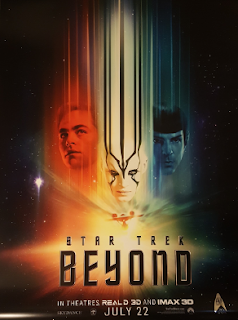 Back in October, I published my ranking of the Star Trek films. As I'm sure you know, a new Star Trek film was released almost two months ago. I really don't want this blog to turn into a movie review site, but I just have to express what I thought of the new one.

Be warned: This review contains spoilers. If you haven't seen this film and don't want it spoiled, DO NOT READ THIS ARTICLE.

In fact, I'm going to put this behind a cut just to make sure. Because


There. Now let's continue.
I was so excited to go see this movie. After the debacle involved with Into Darkness, I was so looking forward to a Trek film that would not engender the rage that the last film sparked. Especially since Simon Pegg had assured fans that this film was returning to the spirit of the original series.

I was quite disappointed.

There were two main things that bothered me about it. First, the 'secondary lesser climax' phenomenon that I see in a lot of films. Many big blockbuster films try so hard to cater to the American sense of individualism that, after they have a huge scene in which the bad guy's forces are depleted, and the good guys seem to have won the day, the main bad guy is seen in a position where he can still wreak evilness, and there is a more personal one-on-one showdown between the primary protagonist and the primary villain.

Let me give you some examples of what I mean:

John McClane has saved the day. The threat posed by the hacker team has been neutralised. However, the leader of the hacker team, Thomas Gabriel, has John's daughter Lucy, and John must confront him to finally kill the last bad guy and save his daughter.

The good guys break in and stop the wedding of David Lo Pan, emerging triumphant from a large battle against Lo Pan's minions. However, Lo Pan escapes with Miao Yin, and Jack must face off against Lo Pan to finally defeat the villain.

The good guys engage in a massive battle against the goblin army at the heart of the Goblin City, and after eventually defeating their foes, make it to the castle at the centre of the city. But just as the group is about to head up the stairs to face Jareth, Sarah stops them and says, 'I have to face him alone.' When Didymus asks her why, she responds, 'Because that's the way it's done.' She then rushes up the stairs alone to confront Jareth.

And this same thing happens in Star Trek Beyond. After the swarm is destroyed, Krall (whose ship somehow doesn't get destroyed in the onslaught of Beastie Boys music) gets on board the Yorktown station with the bioweapon, and Kirk is the only one who can stop him from killing everyone.

Maybe it's just me, but I'm tired of that formula. I wish that, for once, the main antagonist is defeated along with all of his minions. Wouldn't it be nice if, after the good guys neutralised the threat from the enemy forces, they didn't suddenly find themselves going, 'Oh, wait, the leader escaped and is about to do something really bad. We're not done fighting after all.'

Well, I think it would.

And my second problem with the film: near the end, when they say, 'Surprise! The big bad enemy alien boss isn't really an alien after all! He's a human who's been biologically altered by alien technology!' That really was a let-down for me.

Don't get me wrong. By doing this, the film was trying to explore human motivations towards villainy, and was trying to go in a similar direction to Star Trek VI: The Undiscovered Country with their look at how some people are so afraid of change that they'll purposely sabotage peace efforts because they're so used to living in an environment of fear and hatred. Normally, that's a good theme, and I'd totally support a story based on that idea.

But by keeping the fact that the villain is actually human a secret until near the end of the film, the theme seems out of place. Up until that point, I was enjoying the film as a 'not every alien in the galaxy is willing to play friendly with other species, and the Federation is about to learn that the hard way' kind of story. When they changed that theme on me, I felt like the horse had been pulled out from under me mid-race.

Like I said, I really wanted to like this movie. And there were parts of it I did like. Spock and McCoy together, exploring the dynamics of their relationships, that was a nice touch. Looking at the personal details and character development of the characters over the last few years. The subtle nods to the original series (such as Kirk's reference to feeling that his life has become 'episodic' and McCoy commenting on giant green hands — a reference that is backed up by the appearance during the end credits of the film of a giant green hand floating in space, just for a second). The themes of exploration and universal compassion.

But the two big sticks in my craw, the over-reliance on the 'secondary lesser climax' trope and the changing-the-villain-mid-story thing, so overshadowed everything that should have been good in the film that I can't get excited to go see it again.

So in ranking this film, I have to squeeze it in at #7, right behind Into Darkness and ahead of First Contact. Which, of course, will piss off a lot of other Trek fans. But I still think I like Into Darkness just a bit more. For all its faults, Into Darkness didn't leave me feeling frustrated with an awkward plot the way Beyond did.

Anyway, that's what I thought. Although I understand that they're working on a fourth reboot Trek film. Here's hoping they can take what was good about Beyond and not ruin it for me the way they did with this most recent film.

Next week, back to our normal gaming articles. Until then,