I recently stumbled across a fascinating twitter account. It's a bot designed to generate a new fictional map once per hour. These maps are designed to resemble the maps you'd find in the back of cheap paperback fantasy novels. It occurred to me that these maps can easily be adapted for use in original game worlds.

This started me thinking about other resources that GMs can use for their games. So here is a list of a few useful websites. Click on the images to be taken to that site! 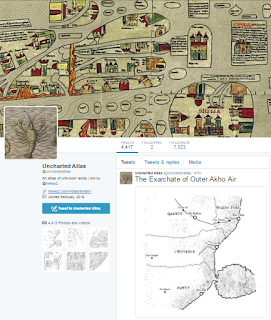 This is the aforementioned map generator bot. Once per hour, it tweets a new randomly generated map, complete with city names. You can easily use a photo editor to change the city names and use these maps for any setting you might wish. This is a great way to find maps that will work for any game you might want to run! 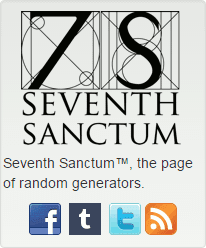 This site is packed full of generators. My favourite is the Envisioner (in the 'Writing' section of the 'Generator Types' drop-down menu). It takes classic stories and legends and mashes them up. A few examples include:
This was where I got the idea for a game I ran last year: the story of Ilmarinen set in a dystopian sci-fi setting.

But there's so much more here! Other writing generators give different sorts of suggestions for inspiration when you need story ideas. There are a variety of generators for alien and fantasy races, for characters and names, items, and much much more! You could easily lose hours here just clicking on the various generators to see what they do! 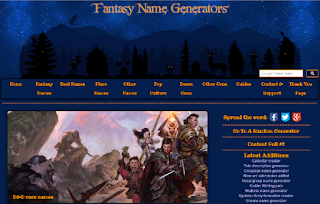 This site is really useful if you need a character's name. I've most frequently used the 'Fantasy Names' option, which creates brief lists of ten names for a variety of different fantasy creature types. These include not only the usual elf, dwarf, goblin, etc, but also names for aliens, treefolk, liches, dryads, demons, angels, werewolves, sea creatures, and many others besides. There's another set of generators for realistic names, drawn from many different cultural traditions around the earth. There's a section of generators for place names, and names for 'other' categories, like political parties, drugs, afterlives, pirate crews, and so forth.

This site also has a number of guides to creating societies, planets, buildings, characters, histories, and fictional technology. There's lots of other things to find here as well!

This website has a lot of useful stuff as well. Aside from hints on roleplaying and world building, my favourite part of this site is the character personality generator. This page takes a list of 19 character traits and randomly assigns frequencies to them (Typically, Sometimes, Generally, Often, Never, etc). This lets you easily come up with NPCs and give them dynamic and vibrant personalities. This is what I used to create the personalities of several of the NPCs that my Friday night Changeling group has encountered already.

There are several other good generators here as well, such as the Basic Character Premise generator, a number of animal and monster generators, and the backstory generator. This one is another one that's worth a few hours of exploring! 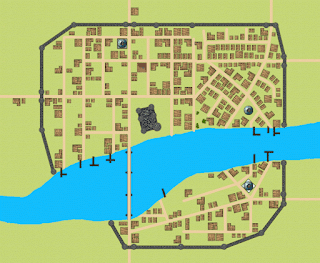 For my last resource, I will share a useful tool that generates fantasy city maps. These maps aren't the greatest; the roads tend to follow a grid pattern more than historically appropriate for the supposed time frame, and the images aren't the prettiest. But they get the job done if you need something quick and easy. And if nothing else, once you have the basic map, you can tweak it as necessary to get a more authentic feel. This generator, coupled with Uncharted Atlas, above, can be very useful in world building!

So there you have several tools that may be useful to GMs of many games. I hope you enjoy them! Have fun playing with these tools, and playing games in general! Until next time, remember to