Remember last week when I promised I would post a review of the game my friend has created and is playtesting? No? Well, I did. So now I will.

Asphodel is a strategic game of ghostly skirmishes. At the mouth of the river of the dead sits the spectral city of Asphodel, made up of the ghostly echoes of locations from the realm of the living. Places that may be many miles apart in the world of the Quick are jumbled together in the necropolis where we lay our scene. It is here that the various factions of the dead battle for the resources they need to move on and leave the afterlands for their eternal reward. You control one of these factions, and must manoeuvre your ghosts to strengthen your own position whilst undermining the efforts of the rival factions.

Welcome to the afterlife.

Although this game is still in prototype format, it works as well as any fully-produced game, so I will review it in the same manner. For starters, the ratings:

Strategy: 4
Randomness: 2
Complexity: 2
Humour: None
Attractiveness: Pretty (keep in mind this is a prototype I'm using; there's a very good chance that once the game is produced, this rating may increase to Ideal)
Expected Length of Gameplay: 45 minutes

The game consists of two types of components: cards and dice. There are five Faction Cards, each representing one of the factions: 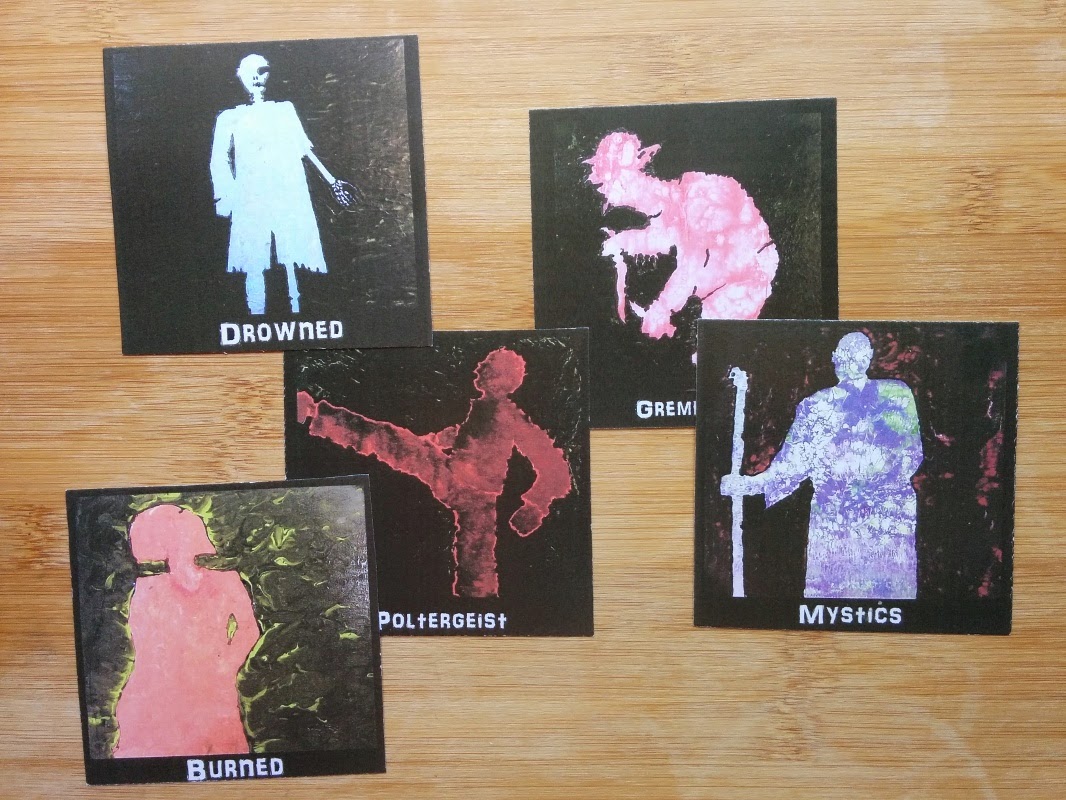 The factions do not have inherent abilities or advantages, but each one is affected by most of the locations in different ways. Which brings us to the other type of card: Locations. Each of these cards represents a specific place within the city, from the Oil Well to the River to Downtown to The Strange Old House. Each Location has an effect, which can be used by any ghost in that Location. Some of the cards have unique effects, but most of them contain one of these basic functions:

Many of the cards grant these effects only to one or two specific factions. For example, The River allows the Gremlins and the Drowned to gain one Resolve. Other factions get no benefit (or detriment) from this Location.

In addition to the cards, the game contains dice. There are five of each colour, one set per faction. Dice are not rolled in this game, but instead, each die is a ghost. The factions have five ghosts apiece, and they are placed on the board such that the number on top represents the amount of Resolve the ghost currently possesses. Resolve is the energy of the dead, the strength and resilience of the ghosts. The higher the number showing, the stronger that ghost is (and the closer to Transcendence, the passing on from the afterlands into whatever awaits in the next stage).

To set up, you deal out the Locations to each player. Each player selects five of the locations from the ones he was dealt to place in the play area as part of the city of Asphodel. It is possible, due to this mechanic, that a faction may have no beneficial Locations in the city. To offset this, players are allowed to draught one location before the cards are shuffled and dealt.

Once the city is laid out, players then take turns placing their ghosts in the city. They cannot place a ghost in a Location that contains dice of a rival faction, and there are no more than two ghosts allowed in a single Location (unless the card says otherwise, as with the Mountains card in the photo above). The total Resolve of all a player's ghosts must be eighteen (that is, a player has a total of 18 pips showing on the tops of all his dice in play during the setup phase). 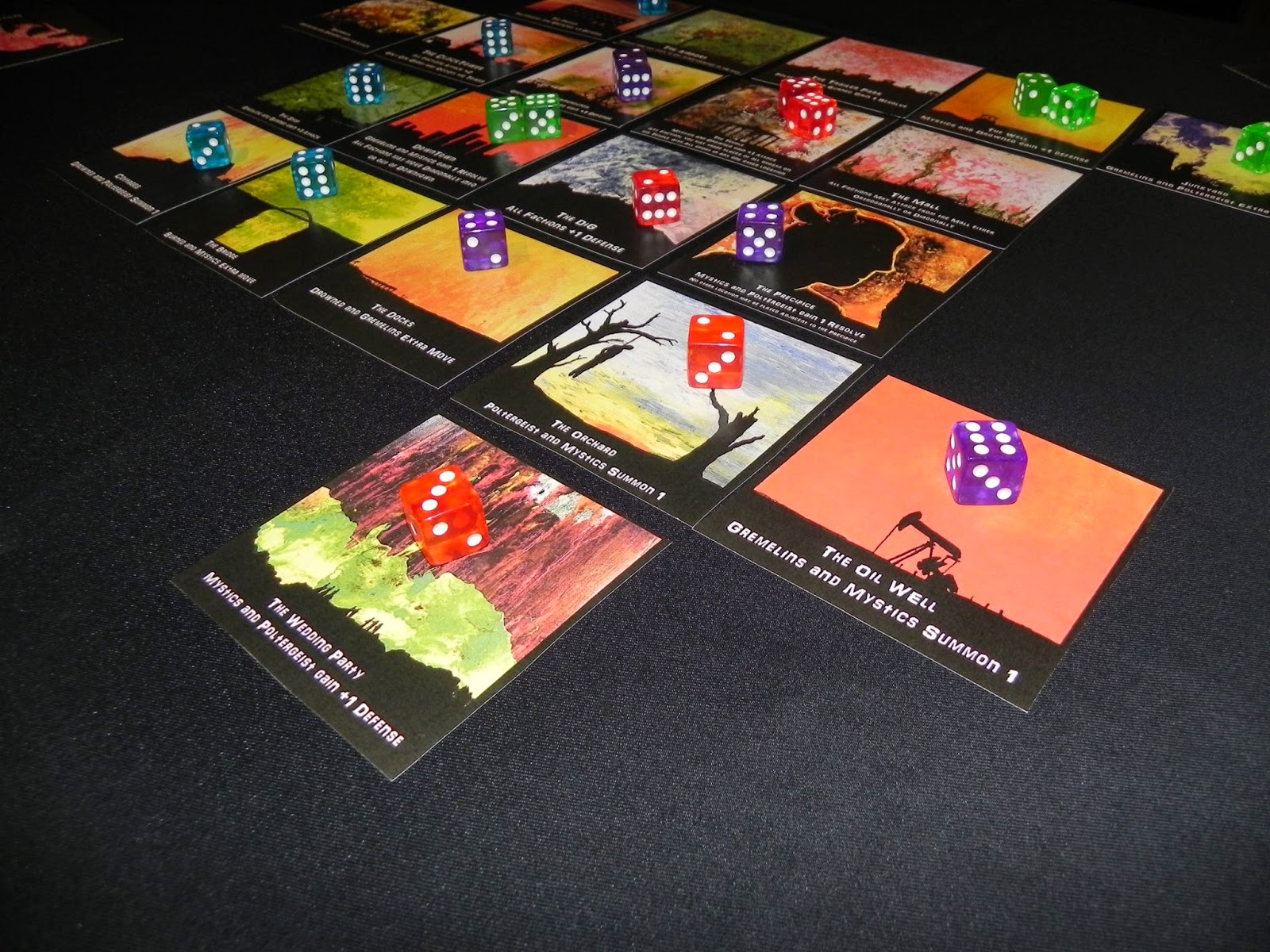 After setup, play proceeds clockwise. On your turn, you may perform either or both of these two actions:
If, after both of these actions have been taken once (or passed), the active player has any ghosts on a Location occupied by ghosts from a rival faction, then combat occurs. All ghosts involved in combat inflict damage equal to their current Resolve to their opponents. So, for example, if the Mystics use their Move action to move a ghost with a current Resolve of 4 onto a Location which contains a ghost from the Burned, which currently has a resolve of 3, then the Mystic does four points of damage to the Burned, and the Burned does three points of damage to the Mystic. If a faction has more than one ghost in a combat, then their total damage is distributed to their rivals in whatever manner the rival sees fit. For example, imagine that the Poltergeist player moves a ghost with a resolve of 6 onto a Location occupied by two Gremlins, one with a Resolve of 4 and the other with a resolve of 5. The Poltergeist does six total points of collective damage to the Gremlins. The Gremlin player chooses how to distribute those points. He may choose to have both ghosts take three points of damage (reducing his ghosts to a 1 and a 2). Or he may assign four points to the ghost with 4 current Resolve, and the remaining 2 to the other one (which would banish the weaker ghost and leave the stronger ghost with a score of 3). In any case, the Gremlins do a total of nine points of damage to the Poltergeist, which is more than enough to banish it.

If the defender is on a Location that grants a bonus to defense, then the damage to each defending ghost is reduced by that amount (or, if the Location grants a negative, as in the case of The Strange Old House in the second photo above, it increases the amount of damage dealt to each ghost). If the attacker moved from a Location that grants a bonus to attack, it does that amount of extra damage (or, contrariwise, that much less damage if the location has a penalty to attack).

Once a ghost is reduced to zero (or fewer) points of Resolve, it is Banished. It is placed on the player's Faction Card, with a 1 showing on top of the die, and must remain there until a ghost still in the city is able to Summon it.

On the other hand, if a ghost would have his score raised to a 7 through the use of the Resolve effect of a Location (some other card effects can also accomplish this), then that ghost Transcends. It is moved to the player's Faction Card with a 6 showing on top.

Once any player has no ghosts left on the board, because they are all on his Faction Card as a result of being Banished, Transcending, or any combination of the two, players complete the current round so that all players have an equal number of turns. The player with the highest number of pips showing on all dice (including those on the Faction Card) is the winner. In the case of a tie, the player with the higher number of Transcended ghosts wins. If there's still a tie, the player with fewer Banished ghosts wins.

This game is very much like Dominant Species, in that there are a number of weighty decisions to be made on most turns. It's a very thought-intensive game, requiring a player to judge the relative benefits and merits of each action. The strategy is complex and shifting, and it's very easy to find that the comfortable lead that you had a few turns ago has slipped away. You are required to have a careful balance of strategies; you cannot win by pursuing a single course of action. Just as one example, it is guaranteed that a player who plays aggressively offensively, attacking at every opportunity, will lose the game, and it is equally assured that a player who takes no offensive actions at all will lose.

I love this game. It is a lot of fun, but is simple enough to be explained to new players in a relatively short amount of time, and it usually lasts a short enough duration that you can play several games in an evening (or switch off and play something else as well, if that's your preference). Everyone I've seen playtest it has also enjoyed it (and there was a lengthy discussion of the mechanics and strategy of the game, as well as suggestions for additions, expansion, etc, after one particularly intense game; this seemed to suggest very high interest from those players as well).

The game, created by John Trobare (whom I've mentioned here before), is likely to be going on Kickstarter relatively soon. Keep an eye out for news of that here! But until then, I hope you enjoyed this review, and as always, I wish you a fond