I normally try to follow a pattern of two-weeks-of-random-topics-then-a-board-game-review, but I'm going to change it up a little bit this week and next; I'm going to do two board game reviews in a row.

But I want to wait until I've had a few chances to play through it before I do that, so I'm going to stick to my normal schedule for this week. That means that I'm going to review one of my favourite board games (and honestly, I can't believe I haven't reviewed it here before): Clans.

Clans takes place in the late Pleistocene era, when early humans were beginning to settle together in villages. Each player represents a tribe, and is trying to score the most points by ensuring that their tribal people are involved in forming the most prosperous villages.

The board represents a series of terrain spaces, with a few small lakes scattered throughout. The game begins with each space occupied by a hut in one of five colours: blue, red, black, green, and yellow. The colours are relatively evenly spread across the board, but not always completely uniformly (this is accomplished by dividing the board into sections of five spaces each, with each section having exactly one of each colour within it, but placement within the sections is random. After setup, once gameplay begins, the divisions between sections no longer affects the game in any way). 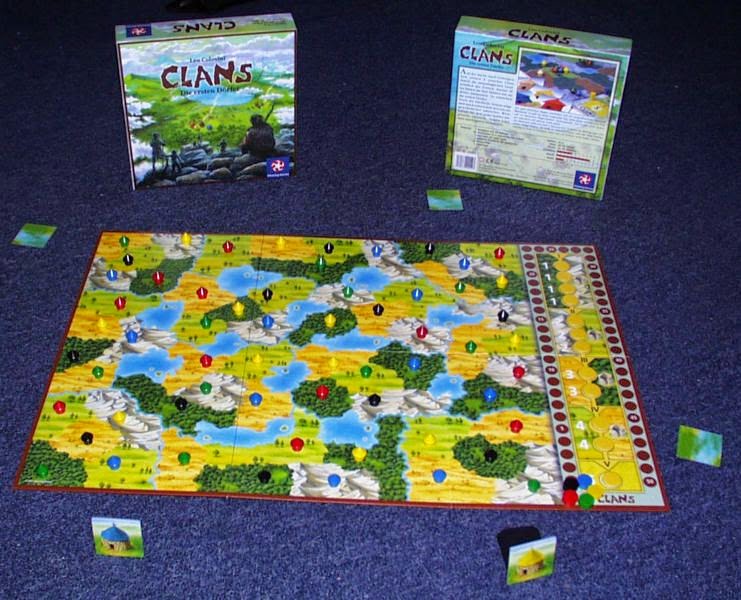 Each player draws one of the coloured hut tiles to randomly determine which colour they are playing. This information is kept secret; as there are five colours but a maximum of four players, there will always be at least one colour that is not being played. Thus, you are trying to score as many points for you colour as you can, whilst trying to prevent the other players from knowing which colour you have, so that they are less likely to work against you directly. If you can succeed in getting the players to think that your colour is (one of) the unplayed one(s), they may let you score that colour more points than they would otherwise.

Each player's turn consists of moving all of the huts from one space to an adjacent space. The huts do not need to be in your colour, especially since often, the huts in a space will be of many different colours. It doesn't matter how many huts are in the space you move from, as long as:

This means that once a group of huts (or sometimes, a single hut) is completely surrounded by empty spaces, it can no longer move. This is a village.

Once a village has been formed, by having a single occupied space completely surrounded by empty spaces, the colours represented in that village score points. Scoring may sound complicated at first, but it really boils down to two steps:
Whoever forms the village gets a token from the epoch track (more on the epoch track in a moment): at the end of the game, after everyone has revealed their colours, each token is worth an additional point. Even if every hut in the village is destroyed (by strife or unfavoured terrain; more on this soon), the player that formed the village still gets the point.

Then the village is scored. The village is worth a base value equal to the number of huts in that village. A village with five huts is worth five points. Every colour in that village gets that many points, regardless of how many huts that colour has in the village. So, for example, if a village is made up of five black huts, two yellow huts, and a blue hut, then black, yellow, and blue each get eight points. It doesn't matter that black has twice as many huts in the village as yellow, or five times as many as blue; they all get the same number of points.

Favoured terrain: I mentioned the epoch track previously. You can see it in the photo above, along the right edge of the board. It's the strip surrounded by the dark reddish-brown dots, with numbers running down the right side. This is where the village tokens are arranged at the beginning of the game. The next token is always taken from the top of the track, so that they indicate which epoch is current. The first four villages formed (represented by the four highest tokens on the track) are the first epoch. The next three villages to be formed are created in the second epoch, followed by two villages in the third and fourth epochs, and the twelfth and final village of the game is the fifth epoch.

The fifth epoch is wild: all terrain types are favoured. Thus, the twelfth and final village of the game is always worth five bonus points.

Strife: Obviously, if all five colours are represented in a village, then everyone in the game (even the colour(s) not being played) is getting the same number of points. Since this kind of defeats the purpose, they have created the mechanic known as Strife. This says that whenever a village is formed that has all five colours in it (and only if all five colours are present in a village), that village undergoes Strife. When strife occurs, all the colours represented by a single hut are removed. So if someone forms a village made up of three blue, two black, two yellow, one red, and one green, then the resulting Strife would remove the red and green huts, because there are only one of each of those two colours. The blue, black, and yellow are not affected, because there are at least two of each of those colours.

Afterwards, you continue to score normally: this sample village would be worth seven points (plus the favoured terrain bonus, if applicable) for blue, black, and yellow.

After scoring the twelfth village, players reveal their colours, all colours not being played are removed from the scoring track (the series of dark reddish-brown dots around the epoch track), points are awarded for village tokens, and the winner is the player whose colour has the most points.

I love this game. It's very much a strategy game, with the only randomness being the slight variation in the placement of colours within a section at the beginning of the game. Not only are you looking for ways to score points for your colour, but trying to find out which colours the other players have so you can try to avoid scoring points for their colours, whilst simultaneously trying to prevent the other players from discerning which colour is yours. I kind of like to describe this game as packing all the strategy from a game of chess into about half an hour. If strategy is your thing, then you will probably love this game. I know I do.

So that's it for this week. Remember to check back next week when I tell you all about the playtests of Asphodel. Until then,