Before I start the actual post, I wanted to mention that this is not a review of the interstellar conquest game by Asmodee. Instead, this is about the two-player abstract strategy game from Gigamic Games.

That said, this post would normally not be a board game review. But this past week has been so ruddy busy and stressful, I simply don't have the time or the energy to think of anything more in depth right now. So I'm going to take the easy route and review another board game.

There's a booth at Scarborough Faire in Waxahachie Texas that sells board games and card games. I spent some time looking at their wares, and decided to pick up a simple little wooden game called Eclipse. Now I will review it for you. Starting with the numbers:

Eclipse is a very simple little strategy game. The board is a wooden disk, about 25 cm (10 inches), marked with holes laid out in a hexagonal grid. The pieces are small wooden spheres, most of them linked in pairs by chains. Each player's set consists of two pairs linked by short chains, and three pairs linked by slightly longer chains. In addition, there is one larger sphere that is not linked to any others. The linked pairs are called 'satellites' and the one larger unlinked sphere is called the 'comet.' The object is to immobilise your opponent's comet. 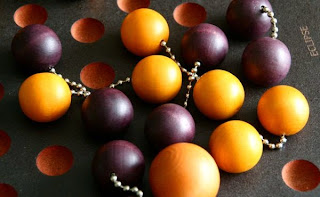 The game begins with each player's pieces arranged on his or her side of the board. Players take turns moving one piece. The comet may move to any empty adjacent space, and is allowed to cross the chains of your own satellites in doing so, but is not allowed to jump over the chains of opponent satellites. A satellite moves to any space that it can reach within the limit of the chain linking it to its partner satellite. If a chain is placed across another chain, as in the case of the pieces in the top centre of the photo above (the chain that links the satellites of the darker colour is on top of the chain linking the two of the lighter colour), then the satellites whose chain is on bottom cannot move until the pieces that have trapped them have moved.

If, at the end of your turn, your comet has no available legal moves, then your opponent wins the game.

Like I said, it's a very simple game. There's not a lot of depth to it, but it's fun for a quick match. It's all strategy, with no randomness at all, so in a way, it's like a super-simplified game of chess. The addition of linked pairs of pieces makes for a nice touch, in my opinion, It changes it from a standard move-and-capture game like chess or checkers to a slightly more esoteric game in which the placement of your pieces changes the way you are able to move. You cannot just charge across the board, but must move two pieces in tandem, leap-frogging them over one another to make any progress.

It might not be enough of a game for serious strategy enthusiasts, but as a quickie between longer games, or if you don't have a lot of time, or especially for younger players who can't yet grasp the subtleties of grander games, it can be fun on occasion.

And that's it for this week. As always, I wish you a fond: