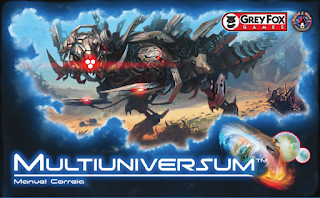 John found a game that he really enjoyed when we went to Geekway to the West last year. It's called Multiuniversum, and it was designed by Manuel Correia. It was originally published by Board & Dice, with a second edition published by Last Level, and the current edition is from Grey Fox.

The premise is that scientists working on creating portals to alternate universes have succeeded in creating those portals, but now must shut them down before horrors from those other universes emerge into ours. You score points by closing portals, as well as gaining bonus points, set-collection style, by gathering data from the universes as you shut down the portals.

Let's take a look at this little game, shall we?

As mentioned, 1 to 5 players take on the role of scientists trying to shut down the generators that are powering the dimensional portals. By playing cards to collect tools, activate the generators' different powers, and using the actions available from their cards, players collect portal cards, which are worth points, but also contain symbols based on the type of universe to which the portal leads, allowing for bonus points from collecting sets of these symbols.

The playing area is arranged with the five generator cards in the centre. Below each generator is a stack of portal cards. Each player has a laboratory card, where they organise the tool cards they are collecting as well as the portal cards they have claimed. Players also have scientist meeples that move between the different generators. 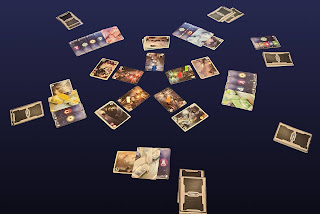 On each player's turn, they get to take three actions. Each action is taken by playing an action card. In order to understand the actions, let's look at the action cards themselves: 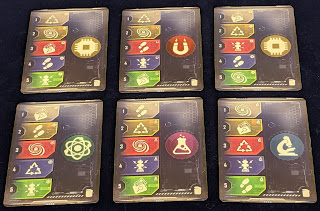 You can play an action card in one of three ways:
I know, that didn't make much sense. Let me explain in more detail:

Take the action on the left

Your meeple will always be on one of the five generator cards in the centre of the playing area. The colour of the generator that you currently occupy determines what actions you may take. As you can see, each card has the same five action symbols, but in a different order. Thus, the cards you have determine what actions you can take based on where your meeple is. If you're on the green generator, you can only take the action in the green space on the cards in your hand. If you're on the red generator, you have a different set of actions that you can take.

The actions available are:

The actions are listed on the left side of the action cards. The large symbol on the right is the tool which can be used to seal a portal. Each portal card has one, two, or three symbols marked on the lower right corner. In order to seal that portal, you need to spend one of each of these symbols. In order to spend them, you must first collect them. That is, you take an action to slide an action card under your laboratory card, on the right side of that card, so the tool symbol is visible (subsequent cards are tucked under existing cards, so that you can see all the symbols you've collected).

For example, in the photo above, you can see that the white lab card (the one closest to the viewer) has a single tool card tucked under it: a purple chemistry vial. The yellow lab, to the left of the white lab, has two tool cards: a red magnet and a yellow microchip.

Thus, when you take the 'seal portal' action, you discard the necessary tool icons from the cards you've collected and claim the top portal card at your current location. This portal card is tucked under your lab card, on the left side, so you can see how many portals you have collected and how many points each one is worth.

You may also take an action to discard a card and draw a replacement from the action deck.

Once three of the five stacks of portal cards are empty (two stacks in a game with fewer than three players), complete the round so each player gets an equal number of turns. Total up your points:
The player with the most points wins.

It took me a bit to get my head around how to play. Not the rules, so much, but understanding how to use the rules to make useful decisions. Usually, when I read a rulebook, I can get a feel for what a game is supposed to do. That wasn't the case with Multiuniversum. Whether that was because of how the rules were laid out, or because I wasn't used to a game in which the function of the cards varies depending on the location of my meeple, I'm not certain.

Still, I found it to be an interesting challenge, and I'd like to try it again now that I have a better understanding of what I'm supposed to be doing.

And let's not forget the most important part: the six characteristics of a good game!
All six! Nice!

I have two minor complaints with this game. First, it's not very colour-blind friendly. The generators can be differentiated by the numbers and action symbols on the cards, but the lab cards are identical except for the shading on the cards. I imagine it would also be difficult to tell the spaces on the action cards apart. The spaces are numbered, but I would think it might be harder to look for the small numbers than to find some other way of telling them apart. Additionally, the 'yellow' meeple looks more orange to me than yellow.

My second is that the iconography is not terribly intuitive. After playing three or four times, it might be easier to remember what all the symbols mean, but I still think it would have been nice to include play reference cards that summarise each symbol to make it easier to remember, especially the first few times you play, what each action entails (especially in reference to the different abilities on each generator).

So there you have it. Hopefully you've learned enough about this game to know whether you want to give it a try. So remember to go out there, be inclusive, and always