This is complicated by the fact that in practise, in a lot of fiction (standard fantasy roleplaying games like Dungeons and Dragons included), those terms actually end up meaning 'on the side of the angels' or 'on the side of the demons.' Often, when a character dies, that character is shown going to the appropriate afterlife: 'heaven' for those who were 'good,' and 'hell' for those who were 'evil' (or something similar: Valhalla, Hades, etc). But what's nonsensical about this is that those who go to the 'evil' afterlife are almost universally subjected to eternal suffering. Which should prompt one to wonder: why would anyone willingly put themselves in a position where that is the known outcome?


The implications of this view of 'good' and 'evil'

Sure, in 'the real world,' it's much less certain what happens to us after death. Some people claim to possess knowledge of what comes after life ends, but they have no reliable way to demonstrate the validity of their claims.

Regardless, in the fantasy of our games, it is demonstrable. Spells such as 'plane shift' can allow characters to see for themselves the truth of the afterlife, to say nothing of the spirits that can be summoned from such spirit realms (or those who visit from those realms of their own volition). So nobody can claim ignorance of this fact.

Perhaps some people may argue that such characters are making a conscious choice. The argument runs something like this: being 'evil' is easier, or at the very least, more enjoyable than being 'good.' Evil characters are therefore making an active decision to endure the agony of eternal torment in exchange for the easy/pleasurable life before they die. Meanwhile, those characters who choose to be good do so knowing that, although they are going to suffer during life, they will be rewarded in death.


The problem with this perspective

I find this viewpoint to be troublesome for two reasons. First, it's based on the idea that all sentient creatures make their decisions about whether to behave in a 'good' way or an 'evil' way on a selfish choice: pleasure now and suffering later, or suffering now and pleasure later? Both options posit that sentience is nothing more than a pursuit of pleasure.

And secondly, this viewpoint seems to suggest that there is no pleasure to be had as a result of being 'good.'

Grounding the question in 'reality'

One of the things that I love about the original Watchmen comic was the way that it points out that the question of evil isn't simply a case of 'doing good' versus 'behaving wrongly.' At the end, the question of 'who is the hero and who is the villain' is left unanswered, and in fact, is essentially unanswerable, as the 'good guy' would, if he were successful in his mission, basically render the world doomed to an unspeakable fate, despite the fact that he's doing what he believes to be the 'good' thing. Contrast this with the 'villain,' who does some truly 'evil' things, but ultimately, does so for the purpose of averting the unspeakable fate that seems to be an otherwise inevitable destiny.

And this is how I view the world. There has been a great amount of debate in a wide variety of arenas about whether an objective morality exists. I will not rehash those debates here, but I will say that it is my firm belief that there is, in fact, no objective morality. Every decision that humans make about what is the right or wrong thing to do is made based on our own inherent reasoning.

In fact, working as a middle school teacher has demonstrated that to me more than anything else that I could possibly experience. My students often make decisions that they know to be bad decisions, because their faulty reasoning leads them to choose the socially preferable actions over the rational actions. In other words, they often give in to peer pressure even when they know that it's the wrong thing to do.

'Good and 'Evil' in the real world

Humans are social creatures. We evolved to be that way. It wasn't our intelligence that allowed us to survive on the Pleistocene savanna; it was our social co-operation. We managed to avoid dying off because we worked together as a tribe to ensure the survival of the species, if not all of the individuals in that species. As such, we are hardwired to crave that social contact, that positive interaction that promotes social well-being even at the expense of the individual. Such hardwiring can be overcome, through physiological or psychological means, or through cultural conditioning. But at our core, that hardwiring still exists.

And that's why I define 'good' as 'working for the betterment of others, even at cost to oneself,' and I define 'evil' as 'working to improve one's own well-being at the expense of other people.'

I'm not alone in this perspective: Marvel comics used this definition when they created the original 'Secret Wars' comic series and put Magneto in the 'good guys' camp. The Beyonder, having no concept of good/evil, created that very definition, and since Magneto ultimately was working for the betterment of all mutant-kind, he did qualify as 'working for the betterment of others.' The fact that his scope included only a portion of 'others' serves only to highlight the grey areas involved in defining these terms...

Regardless, this characterisation of Magneto as a 'good guy' persisted in the comics for years afterwards, and even influenced his representation in other media (most notably the X-Men film series). And in using this definition, we can compare it to most commonly accepted descriptions of 'good' behaviour, wherein we find that the definition holds up. For example:
All of these are generally seen as examples of 'being good' or 'doing the right thing.' And all of them are ways of working to improve the well-being of others, even at cost to oneself.' Even something as simple as 'following the rules,' as long as we have an understanding that the rules exist to make things fair or to protect others (the fact that 'the rules' don't always exist for these purposes is a rant for another time), can be seen as someone accepting a cost to themselves (i.e., not taking an unfair advantage for themselves) in order to benefit someone else (ensuring that others have a fair and equal opportunity to be successful).

Likewise, earning your way through hard work means that you are contributing to society in general instead of getting by without giving back to the society that has enabled you to thrive.

And now we're finally coming back to the point that I started making waaaaaaaaaay back at the beginning of this article: being evil is not always easier or more appealing than being good. As Durkon says in that Order of the Stick strip that I referenced up at the top, 'Everyone always talks about the seductive power of Evil, but I think Good's just as slippery a slope. Doing good—sometimes even just seeing other people do good—feels good. That feeling gets to you eventually.' (that quote has been altered here from the way that the comic normally transcribes Durkon's accent to ensure it can be understood, by the way).

And he's right. Unless a person has been truly damaged or otherwise altered by conditioning, medical issues, trauma, or some other problem, people like to help other people. Humans have a natural sense of empathy, and they don't generally like seeing other people suffer. Even those who have had their sense of empathy twisted to the point where they become racist, sexist, or possessed of some other form of bigotry, still see themselves as helping others. The fact that they have severely limited their list of who is deserving of help doesn't change the fact that they are still trying to help. The white supremacist who is fighting for 'white power' is still working to improve the condition of other white people, misguided though that viewpoint may be. And that feeling of helping (even if the 'help' comes at the expense of non-white people) feels good.

It all comes down to that meme that I've seen floating around a few times: the children of an African tribe who, when encouraged to compete to find a basket of fruit to keep for themselves, instead co-operated to find the fruit together and share it amongst all of them, because (as they said) 'How can one of us be happy if all the other ones are sad?' 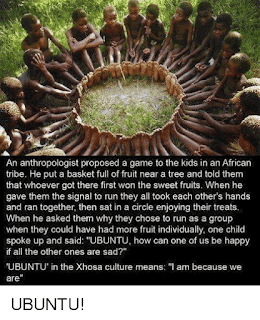 And I firmly believe that that, ultimately, is the defining characteristic of what it means to be 'good.' Working to make sure no one else is sad, because how can you be happy when another one of you is sad?

In the end, I think this makes for a better outlook on the question of 'good versus evil' than any traditionally and commonly held perspective on the issue. And sure, there are those that say, 'Altruism does not exist, because in the end, any act of doing "good" serves only to make one feel good, or at least, not feel bad.' But even if that's true, it's still in keeping with human nature as it has been observed across cultures and eras.

So aside from the obvious immediate effect of an alternate perspective on what it means to be 'good' or 'evil,' and how to play characters of either ilk, there's the fact that players (both GMs and the 'players') should see 'good' not as something they 'have to do' out of promise of an eternal reward, but as something they want to do, and enjoy doing, because in the end, being good makes you feel good.

And I think we should start playing that up in our games.

Anyway, that was a long article, and I hope that you enjoyed reading it, even if it was kind of a longer one. I trust that this will give you some interesting new ideas for your games, or at least, some new approaches to take to your characters in your games. And either way, I ask you please to always