This week, we have another PinkFae Archive (remember, the articles in this series are repostings of entries that I wrote during my time with PinkFae, which are being published here so as not to be lost). This time around, we have the review of the wonderful game Tsuro.

This article was originally posted on 16 May 2016. Enjoy! 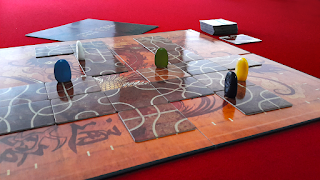 Another week, another board game review. This week, I'm going to talk about a simple but enjoyable game called Tsuro. It's a fun little spatial-awareness game with a bit of a zen theme. I first saw it played on Wil Wheaton's Tabletop, and got to play it myself a few months ago. I really enjoyed it, so I picked up a copy for myself. So let's take a look at this game now, shall we? First, as always, we look at the ratings.

Tsuro is played on a board that represents a 6 x 6 grid. It has a lavish Chinese-style illustration of a dragon, along with characters. Along the outer edges of the board are marks, two per grid square. Players begin by taking turns placing their playing pieces on one of these marks to determine their starting positions.

The game is played mostly with tiles. Each tile is marked with four paths, connecting the eight points on the sides of the tiles. Players have a hand of three tiles. On his or her turn, a player must choose one of these tiles and place it on the board in front of his or her piece. The player then moves his or her piece along the path created by this new tile. If the tile connects to another that continues the path beyond that tile, the player must move as far along that path as he or she is able, until he come to the end of a path, or falls off the edge of the board. If, when a tile is placed, it extends a path for any other player, that player must also move his or her piece along the newly extended path. The active player draws a new tile to replace the one that was just played, and the next player then takes a turn.

Players may be eliminated in one of two ways:
The winner is the last player remaining. And really, that's about all there is to this game.

This game relies most heavily on spatial awareness. Players will be most successful when they are able to grasp the effects of how their tiles extend and connect the existing pathways on the board. In this sense, it is a little like the game Labyrinth (not associated with the Jim Henson film). There is some small amount of strategy involved; players can place their tiles in an attempt to set themselves up for beneficial turns later on. There's also a little bit of randomness, in that the tiles you have available to play are drawn by chance. But given that you have three tiles in your hand at any time, and those tiles can be placed in any of four orientations, the impact of that randomness is mitigated to a great extent.

Ultimately, it boils down to how well you are able to envision the effects of playing any of the tiles in your hand. Players who can imagine the results of their plays before actually placing the tiles will do better than people who lack that spatial recognition ability. How long can you keep your piece on the board whilst manoeuvring the other players out of the game?

I personally really enjoy this game. Aside from being fun in a spatial-awareness sense, it can accommodate anywhere between two and eight players. This means that it's good for a fairly large group as well as being suitable for a quiet night in with the significant other. It's short, so can be played between heavy games, or if you're in the mood for a bunch of quick and easy games. It's simple, so it can be played with kids of very early ages (I've played this game with a six-year-old). It won't scratch the heavy-strategy itch, so players of intense games like Axis and Allies won't enjoy it much. But if you're up for a short and easy game, Tsuro definitely delivers.

I think that's good for now. I'll see you back here next week. Until then,