Oh my goodness... has it really been three weeks without a post? Bad, bad Game Dork!

So for this week, let's go with a really simple review of a great board game: Labyrinth. As always, the rating system is right here:

Strategy: 2
Randomness: 2
Complexity: 1
Humour: None
Attractiveness: Useful
Expected Length of Game Play: 30 minutes.Labyrinth, despite the name, has nothing in common with the Jim Henson movie. It is more akin to the original Dungeon & Dragons roleplaying game. The board represents a labyrinth of stone corridors, and the players move through the maze collecting treasure. However (and here is the defining characteristic of the game), the labyrinth is a magical place that is constantly shifting, and so not every part is accessible at any given time. The board is an innovative design; there is an actual board, but the game takes place on a series of square tiles, each of which displays a portion of stone corridors in one of several arrangements (including a straight passageway, a right angle turn, and a T-junction). Sixteen of these tiles are permanently affixed to the board itself, while the others are placed at random in the rows and columns to fill the remainder of the playing area. To give you a better idea, a picture of the board is provided below. 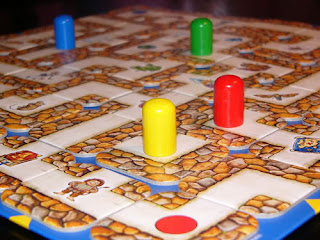 The arrangement of the permanently affixed tiles is such that there are three rows and three columns that can slide freely across the board in either direction. Furthermore, there is one tile more than will fit on the board.

This means that not all tiles match up with the adjacent tiles. This results in a constantly shifting and not-necessarily-fully-navigable layout to the dungeon maze. As you can see in the photo, the yellow piece has become trapped on a tile that does not connect to any other corridor.

At the beginning of the game, each player receives a stack of treasure cards. He is only allowed to look at the first one (thus ensuring that he cannot plan out lengthy chains of treasure collecting). Each treasure (and I use the term loosely; a few examples are a princess, a spider on a web, and a moth) is duplicated on one of the tiles in the dungeon. The four corners each have a coloured dot; the players start the game on the appropriate coloured dot.

A turn consists of two actions: first, the player takes the one tile that is not currently on the board and slides it into the board wherever he likes (the only restriction on this is that he cannot undo the last move that was made; that is, he cannot put the tile back where it just came from). This causes the entire row or column to slide one tile across the board. The shifting passages of the Labyrinth are resultantly altered with each player's turn. The board is conveniently marked with little arrows to enable players to know which columns and rows can be moved and which cannot (due to the presence of the permanently affixed tiles). They can be seen in the foreground of the above photo; they are the little yellow triangles on the edge of the board.

After having shifted the labyrinth, the player moves as far as he likes (or is able) along any corridor. If he lands on the treasure he is currently seeking, he turns that treasure card face-up next to his stack to indicate that he has claimed it. He can then look at the next card in his stack. When his movement ends (through reaching the end of a corridor, landing on his treasure, or player choice), the next player then takes the tile that was pushed out of the arrangement by the last player and takes his turn.

The game ends when one player collects all the treasure in his stack and returns to his starting point, thus becoming the winner.

The game is quite simple in play, and is (in my opinion) a lot of fun. It relies most heavily on spatial reasoning abilities, but strategy (finding ways to alter the corridors to impede your opponents' progress) and some amount of randomness (the initial layout of the dungeon is randomly determined, as well as which treasure cards are in your stack) play a factor as well. I played in a game in which it took me five turns to get to my first treasure, because the arrangement of tiles combined with the way in which the other players moved the tiles to keep me from finding a pathway to that first treasure for several turns. In this same game, another player managed to collect all six of his treasures within seven turns, because the layout simply happened to have passages leading to everything he needed.

This game lacks the in-depth gameplay of more intense board games like Betrayal at House on the Hill or Settlers of Catan, but is a remarkably enjoyable game despite its simplicity. The creators managed to find a perfect mechanic for an enjoyable evening's diversion and didn't need to dress it up with extra gimmicks.

You may not like this game, and that's fine. But hopefully I've given a sufficiently thorough description to let you decide on your own. I recommend you do try it, though; in my opinion, it's a lot of fun for a quick and simple game on occasion. Whatever you decide, remember to play more games, and until next time, I bid you a fond

Email ThisBlogThis!Share to TwitterShare to FacebookShare to Pinterest
Labels: Betrayal at House on the Hill, board game, Dungeons and Dragons, Labyrinth, review, Settlers of Catan