Clans Vs Fae - Comparing an Original and a Reimplementation 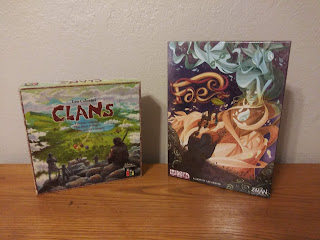 Many years ago, I saw a game called Clans being sold in a game store. I read some reviews online, and thought it looked like a good investment, so I bought it. I played it, and I loved it. You can see what I thought of it in my review.

A couple of months ago, I noticed that there was a listing on Board Game Geek for a reimplementation of this game called Fae. I was apprehensive, yet excited. Clans had been out of print for some time, so I was pleased to see that it would be available again, although I was concerned that they had complety changed the theme.

I finally got my hands on a copy of it. So today, I'm going to compare the original game, Clans, to its reimplementation, Fae.

In Clans, players are moving wooden huts around a board to represent prehistoric settlers gathering into villages to maximise their chances of survival.

In Fae, players represent a faction of the fair folk, trying to move druids into groups where they can perform rituals that will be beneficial to their factions. The pieces are plastic druid figurines that are being moved amongst various terrain types which, depending on the current flow of magical energy, may be blessed or cursed for the current rituals.

The game itself is identical. The mechanics are the same, scoring is the same, even the layout of the terrain has not changed, as can be seen by comparing the two game boards: 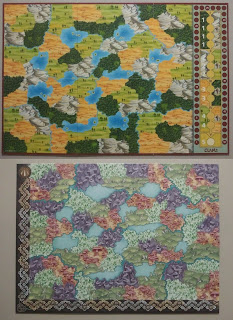 Aside from the theme, the visual feel of the game is radically different. In Clans, the game took place in phases called 'epochs,' which were measured on the board using plain yellow discs that doubled as bonus point chits. In Fae, however, they replaced the discs with cards that sit beside the board. Both the scoring chits from Clans and the ritual cards from Fae can be seen here: 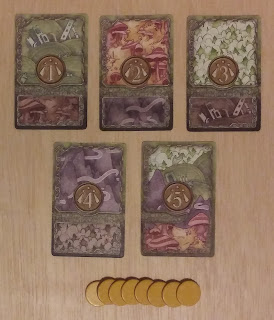 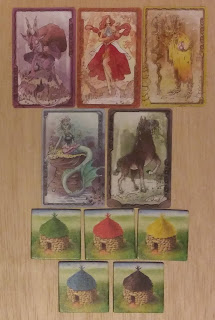 And, of course, the playing pieces themselves. You can see these here with the scoring discs for each colour (don't forget that you can click on the images for a larger version):

My thoughts on the two versions

Mechanically, the two games are identical. From a purely gameplay and strategy perspective, there is no difference whatsoever.

Thematically, Clans holds together a little better in my opinion. Moving small groups of settlers together to form villages makes a little more sense than bringing druids together to perform rituals. That being said, of course I do like the theme of Fae, being a fan as I am of faerie mythos.

Fae is somewhat prettier. The colours are more muted, but along with the artwork (especially on the cards that accompany the board), it's more visually appealing than Clans. However, I will say that the muted colours will probably make Fae more difficult for colour-blind players.

The druid figurines from Fae are very nice, but I tend to prefer the wooden huts. Something about components made from wood appeals to me in a way that plastic does not. As lovely as the druids are, I find I like the huts better.

So, whereas I rated the attractiveness of Clans at 'Useful' (that is, it is neither beautiful nor ugly, but it makes gameplay easier), I would rate Fae at 'Nice' (the design is beautiful, but makes gameplay harder than it needs to be). I rank it thusly for three reasons:
There is one area in which Fae is objectively better than Clans, however: the rules. The Clans rulebook is a densely worded document which, whilst it leaves no room for misinterpretation, can be harder to get through for someone who has never played before. Fae's rulebook, however, is better organised so that it's easier to read, and shorter overall. And best of all, it does this without sacrificing any of the clarity.

Fae does leave out the tactical suggestions that were included in the Clans rulebook, however.

So which is better? Clans? Or Fae?

Honestly, I think it's a wash. They both have advantages and disadvantages that, in my opinion, balance each other out. Clans is better in that:
But Fae is better in that:
However, Fae has one very distinct advantage over Clans:
So there you have it. I hope you have enjoyed reading this article, and I humbly beseech you to come back next week for more gaming goodness. In the meantime, remember to