It seems as though everyone who loves board games loves Azul. So when I had a chance to play it, I absolutely had to give it a try! And I must say, I can see why so many people enjoy it. It's very thinky-thinky, with a pleasant theme and some really nice components.

But I'm getting ahead of myself. So let's go ahead and get started, with my review of Azul.

An Overview of Azul

In Azul, players take on the roles of tile-layers charged with decorating the palace of Portuguese king Manuel I. To win, you must use shrewd judgement to acquire the best tiles so you can try to make the palace rival the Alhambra, as other players are trying to do better work than you so they can gain the king's favour instead. 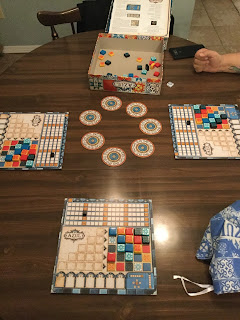 The game consists of some player mats, several discs that serve as the market, and a variety of square tiles in one of four colours (three colours are decorated with fancy patterns). The player mats are divided into four sections: a scoring track, a claimed tiles section, a scored tiles section, and a broken tiles area.

Players take it in turn to collect tiles from the market. There are a number of discs that make up the market, the exact number varying depending on the number of players. Each round starts with four tiles on each disc, drawn at random from the bag. Players turns begin with taking all of the tiles of one colour from one of the discs; these are placed in the claimed tiles section on the player mat. They cannot take some of that colour; they must take all of them. They cannot take more than one colour; they must only collect one colour. All the remaining tiles on that disc are dumped into a pile in the centre of the ring of discs. 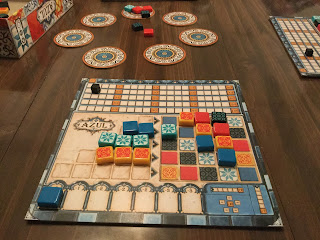 When you take tiles from the market, you must place them in the collected tile area, the section on the left with one space in the top row and five spaces in the bottom row. All tiles collected this turn must go in the same row of this section. Once you've placed a tile in a row, all tiles in that row must be of the same colour. You can have the same colour in multiple rows (so, for example, you can have two different rows with red tiles in it). If you have more tiles than will fit into the row where you are placing them, the extra tiles go in the broken tiles row at the bottom. These will be worth negative points at the end of the round.

Players score points for the tiles placed in this round, starting with the top row and working down. Each tile is worth one point, plus one for each other tile in an unbroken row or column of adjacency (both, if that tile is in both a row and a column of adjacent tiles). Any tiles in the broken tiles section are worth negative points as listed on the space they occupy. Players calculate their points and move their scoring marker as appropriate.

This game is surprisingly deep. The theme isn't very robust (it's not like you're moving troops in to conquer enemy territory or anything), and the rules are pretty simple. But decisions become difficult, especially in later rounds as your player mat begins to fill up. You must weigh the options of which tiles to take, based not only on what is most beneficial to you, but also on what will be more of a hindrance to your opponents. And this can lead to some very challenging tactical decisions.

And of course, let's not forget to look at the six characteristics of a good game:
All six! No wonder this game is so popular!

That said, I must say that I certainly like it. It scratches the need I have for thinky-thinky games, but is compact enough that it can be played easily in many settings with a minor time investment.