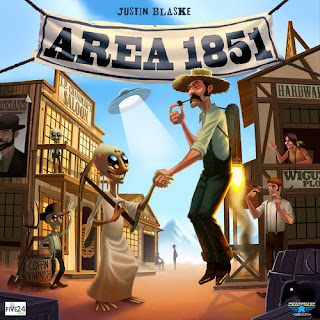 I hesitate to call Area 1851 a board game, because in many ways, the board is almost superfluous. It has a scoring track around the edge, and artwork depicting five locations within the old west town. Almost all of the action in the game itself occurs with cards.

But I digress. Let me describe how the game works: there are three types of cards: Event, Feat, and Tinker. The Tinker cards are most important; they are what drives most of the action of the game. These cards represent either a gadget or a modification. The whole point of the game is to assemble devices by adding modifications to gadgets, and then to deliver them, which earns you reputation (which is really just the word that this game uses instead of 'victory points'). Feat cards offer additional ways to earn reputation, and event cards create one-turn-only conditions, such as rules modifications, limitations, bonuses, and so forth.

Here's how Area 1851 works in a little more detail. First, the players draw an event card. This describes what weird variations will affect the players this round. Second, all players draw until they have a hand of five tinker cards. They also roll 3d4. In the third phase, players have two action points that they may use. There are four possible actions they may take with these action points:

In addition to these actions, players may activate their workers (more on these in a moment), and/or alter the result of a single die by 1 point at the price of discarding a card from their scrap pile. These two actions do not cost an action point.

Once this has been done, you move on to the delivery phase, where players may discard devices they have in play to earn the listed reputation points. The turn ends with players moving their assistants back to the idle spaces and passing their hand of tinker cards to the next player.

There's a little more depth to Area 1851, though. The two most important extra details are the devices and the workers.

As mentioned, there are two types of tinker cards: gadgets and modifications. But these come in three types: alien, cowboy, and native.  There are also some that are neutral; they have no type. This is only important because if you deliver a device that is full and is made up of all the same type (e.g., all cards making up a device are alien cards), then you get double points for that device. Also, some of the feat cards can grant you bonus points depending on the type of cards in the device.

Each card has a cost and a point value. To play any card, you must assign one or more dice to that card in the Fabricate or Attach actions. The value of the dice must be equal to (not greater than!) the cost listed on that card. Thus, if you have a card with a cost of 3, you can assign a single die showing a result of 3, or a pair of dice that total 3, or even all three of your dice if they all have a 1. This is why the 'fiddle' free action (discarding a tinker card to alter the value of a die by 1 point) is so important: if you need to spend 3 points, but you rolled all 2s and 4s, you can't use any of those dice to equal 3 without using the 'fiddle' free action.

You can deliver any device during the delivery phase. You gain reputation points equal to the total point values listed on all the cards (the gadget card and any attached modifications). A device is considered full if it has a modification card installed in all available attachment points (which makes the device worth double points if all cards are of the same type).

In addition to the tinker and feat cards, each player has three workers. These are represented by meeples that resemble aliens in cowboy hats. For the first five turns of the game, each player can use only one of these. After turn five, they receive a second worker. After turn ten, they receive the final worker. These workers start the turn in an idle work space on the board. There are five locations depicted on the board: the Town Hall, the Replicator, the Storehouse, the Workshop, and the Recycler. Each one has an idle work space attached to it. Your worker(s) begin a round in one of the idle work spaces. You may use a free action to activate one or more of your workers. Depending on which space the worker is on, this grants you an extra ability.

At the end of round 15, players reveal and score any feat cards that take effect at the end of the game. Whoever has the most reputation is the winner.

As I said, it seems more like a card game than a board game to me, though it does have elements of a worker-placement game as well as a dash of Sushi Go thrown in for flavour (ha!). I found it vaguely amusing, and somewhat enjoyable, although the reliance on dice to give you numbers needed for the cards in your hand can be very frustrating at times (the game I played, I frequently found myself with nothing in my hand but cards that cost 9 or more to build, and the dice refused to give me any total higher than 7). I personally would be willing to play Area 1851 again on occasion, but I probably don't need to own it.

But that's just my thoughts. By all means, give it a try and decide for yourself! And until next week,