Yet there are the hordes of females depicted with breasts that would, if they were on a human (or human-like, such as elves or halflings) be considered sexy. For example: 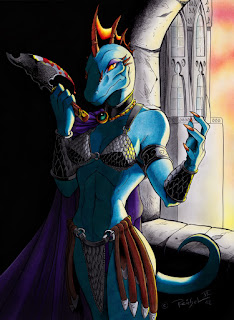 The absurdity of a reptile with boobs is so great that it was even parodied in an installment of The Order of the Stick. But what brings me to write about this topic is an article I read over at Nerdarchy. It's entitled 'D&D Dragonborn Illustrate Why the Reason Why Matters.'

Yeah, I know that title is a little hard to parse. Perhaps a better way to phrase it would be 'the importance of the reasoning behind your actions is illustrated by D&D Dragonborn.'

The main thrust of the article is this: it doesn't make sense to have breasts on non-mammalian females, such as Dragonborn, lizardfolk, mind flayers, and so forth. However, there may sometimes be valid reasons to have them anyway. In 4th edition D&D, females of these species had breasts, because (according to the article) they are seen as a source of (or, at the very least, symbolic of) feminine power. Thus, by giving breasts to non-mammals, they are allowing females to be seen as powerful without sacrificing their femininity.

However, in 5th edition, these races have no breasts. The idea here is that, even with the best of intentions, human-like breasts are more commonly associated with sexual objectification than with feminine power, often despite the intentions of the creators of the artwork. In other words, even if an artist put breasts on a lizardfolk for the purpose of symbolising female power, the end consumers of that artwork (i.e., the players who purchase the books) view it as sexual gratification.

Given the current state of gender in American culture and the culture of other industrialised nations, this is a valid concern. To a great extent, even in nations where women are better off (say, the United States, as opposed to Saudi Arabia where it will remain illegal for women to drive a car until June 2018), women still face levels of inequality. These inequalities may be subtle, easy to overlook, and less extreme than those of women in other parts of the world, but they can still have significant impact on the lives of the women whom they affect.

I'm trying to keep this blog from getting political, so I'm not going to delve any deeper into the issue. If you want to know more about this topic, or you need examples of ways in which women are still oppressed in more 'advanced' countries, try this article about the misinformation regarding feminism.

Returning to the article that inspired this post (D&D Dragonborn Illustrate Why the Reason Why Matters), the author describes how he had a player that came to him and asked to play, in a 5th edition game, a dragonborn female with breasts. She explained to him that she specifically wanted a symbol of female power for her character. The author/DM felt that in such a situation, with both the player's and his own guiding influence to oversee the characters, this was a reasonable request, and so he allowed it.

As I was working on the prop for which I needed the picture, I decided that biological reality was of some level of importance to me. The lizardfolk and dragonborn in the world I'm creating would not have breasts, because I wanted to stay in keeping with non-mammalian entities having no mammary glands.

But then we get into the bigger question: we're already talking about a fantasy world. Given that lizardfolk, dragonborn, mind flayers, and other fantasy races are already a bizarre merging of real-world elements with fantastical ideas, do we need to worry about whether non-mammals have boobs? In other words, if I'm ok with teleport spells and fireballs, why would I have a problem with non-mammalian mammary glands?

And that's where personal preference comes in. If you are running a game that includes reptilian PC races, you are welcome to put breasts on the females of those races. Just keep in mind the subtle nuances of how those actions may be perceived by your players, and make sure to work hard to overcome any potential objectification that may result.

As the still somewhat recent phenomenon of Gamergate illustrates, there is still a lot of misogyny extant in the gaming world. I hope that you, like me, are working hard to ensure that this wonderful hobby becomes and remains accessible for everyone, regardless of demographics. Because, as I've said many times, everyone is welcome at the gaming table.

So, I hope this has been interesting for you to read, and has at the very least given you something to think about. So have fun out there in the many worlds of gaming, remember to make the world a more inclusive place, and of course,