I won't rehash what he has already written. You can read for yourself if you are interested. But his article has prompted me to contemplate a matter that I had not specifically considered previously, and to examine not only what I understand balance to be, but the issue of how important balance actually is. And more importantly, I have been able to flesh out and fully realise the idea that has been hovering just beyond reach for all these years.

Here's the thing that is important to understand when we discuss the concept of balance in any game: balance always needs two opposing forces. Even if we're talking about the simple act of an even distribution of weight for the purpose of maintaining an upright and steady posture, we're looking at forces pulling an object (or set of objects) in two different directions. Whether we're talking about a balancing scale: 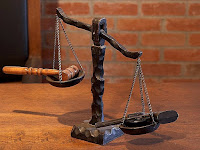 Or a tightrope walker:

In most games, the answer is obvious. The two opposing forces are the players (although, obviously, in the vast majority of games, there may be more than just two forces/players). There should be an equal opportunity for everyone to win (at least at the beginning; this can change over the course of the game as a result of skill, luck, strategy, or player decisions).

But when we start talking about roleplaying games, the issue gets a lot more complicated. After all, what are the opposing forces in a roleplaying game? Usually, the players are on the same team. So is it GM vs player? Or are we looking at PCs vs monsters? Perhaps its an issue of the players/PCs vs the story/the world/a recurring villain/etc?

And here's the thing: it depends on what you want out of the game.


Balance Depends on the Players

This goes back to player types. Your player type is usually, but not always, aligned with what you want from your game.

Of course, these are very broad and vague generalisations, and should not be seen as a rule of thumb.

Balance in General Parlance vs Balance in Reality

But what I've noticed when I hear people talking about whether a game is 'balanced' is that they usually mean 'no one character/class/race/PC combination/etc is more powerful than any other.' In other words, they want to make sure that each character has a chance to shine.

If we really look at this concern, we find that what's really happening is 'I don't want to sit idly by in combat whilst one player gets all the action and glory.' Which, if combat is the main draw to a game, is a valid concern.

But it's not the only type of balance in a game.

In the aforementioned article, the author refers to this as 'spotlight balance.' Are players given equal time to hog the spotlight? Is there one combat in which the fighter gets to shine, then another where the mage takes centre stage, followed by a fight in which the thief gets the greater share of glory?

This is compared to 'statistical balance' – the chance that any given group of players will be successful in a particular situation. Roughly speaking, and notwithstanding the decisions and actions of a specific group of players, what percent chance will these characters have of overcoming a particular adversary (or group of adversaries)?

The third type is 'scenario balance,' which is a measure of the chance of success in an entire campaign. Roughly speaking, it's a measure of how likely the players will be in successfully completing the entire story.

My Problem with Balance

And here's where the niggling doubt at the back of my mind creeps in. None of this balance addresses my particular desire: how good a story we are telling.

Let's look briefly at an example: The Lord of the Rings. Tolkien's masterpiece is widely considered to be one of the greatest stories in existence. And yet there is no balance at all. There's no spotlight balance (none of the hobbits are even remotely as capable of accomplishing much in the way of combat as the other characters). There's frequent statistical imbalance (the encounter with Shelob had a remarkably strong chance of ending poorly for both Sam and Frodo). There's not even really a lot in the way of scenario balance. Given the odds stacked against them, the probability of getting to Mordor and destroying the One Ring was, realistically speaking, pretty low.

But you know what? That's part of what makes it a great story. A large part of the appeal of adventure tales of this sort is seeing the underdog overcome great odds to prevail where everything tells us he (or she, or they, or whoever) should not.

Now, I will fully admit that it takes a certain group of players to be willing to play through a campaign that intentionally makes it so hard on them. For tabletop RPGs, statistical balance and scenario balance are probably very important. But is spotlight balance so vital?

Well, in a combat-focused game, yes, it absolutely is. For Butt-Kickers, Power Gamers, and Tacticians, it certainly is. But for other situations, it's not necessarily. Storytellers can often enjoy the dramatic potential of mismatched power levels amongst the PCs. I myself still fondly remember the exploits of Alexis, the young daughter of a PC in a game I once played. At the age of 6, she was hardly the equal of any other character in a fight. Yet she was one of the most enjoyable aspects of that game.

Ok, maybe there is a type of spotlight balance that includes non-combat situations. Perhaps my character is completely useless in combat, but give me a chance to convert a blue-ray player into a working spacecraft, and be amazed... or some other similar example.

Anyway, that's my issue with balance. It is, as the Angry GM points out, poorly understood; additionally, it's not always applicable to all emotional desires in a game. I'm not saying that there's no place for balance. I merely think we need to work harder to understand what exactly it is, and to recognise that it's not so easily understood as one might think.