Board Game Review: Majesty: For the Realm 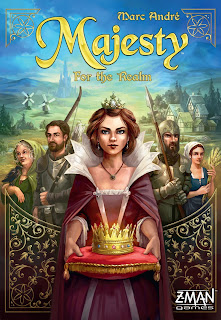 I have been learning a lot of cool new games so far this year. One of those is Majesty: For the Realm. It's a quick but fun little game from Z-Man Games, designed by Marc André. The premise of this game is that the players are competing to claim the crown. Players must manage the subjects in their domains to amass more power than their rivals.

I wasn't sure what to expect from this game at first, but in the end, I found myself quite enjoying it. But let's not get ahead of ourselves, shall we? Let's look at the numbers for this box of fun:


An Overview of Majesty: For the Kingdom 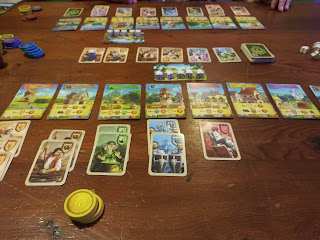 The game consists of a number of cards, some meeples, and plastic coins in various denominations. Most of the cards are character cards. They represent the people working in your domain: millers, brewers, witches, guards, knights, innkeepers, and nobles. Some cards are double cards: they may be used as one of two different people. For example, some double cards can serve as either a guard or as a noble. These cards are shuffled into a deck in the middle of the play area. A row of six of these cards is dealt out next to the deck.

Each player receives cards to represent one of the buildings in their domain: a mill, a brewery, a cottage, a guardhouse, a barracks, an inn, a castle, and an infirmary. There are two sides to each building; players agree at the beginning of the game which side to use. The scoring is slightly different between side A and side B. Whichever side you decide to use, you arrange these buildings in a row in front of you.

Finally, you get a worker card, which has spaces for five meeples, and the meeples to go in those spaces.

A turn consists of taking one of the character cards from the display in the middle. You may take the first card in the row for free, but if you want to take one of the other cards, you must place a meeple on each card in front of it in the row. If there are any meeples on the card you choose, you add them to your supply (if this brings your total number of meeples above five, the extras are placed beside the worker card).

Once you've taken a character card, you place it below the corresponding building card in your tableau. Millers go under the mill, brewers below the brewery, witches go to the cottage, guards to the guardhouse, knights go to the barracks, innkeepers to the inn, and nobles to the castle. Then you take whatever action is listed on that building.

Most actions involve scoring points, and not always just for that building. For example, the cottage gives you two points for each miller, brewer, and witch in your tableau (on Side A, at least). Thus, if you have two millers, a brewer, and a witch already in your tableau and you take a turn to claim another witch from the row of character cards, you would earn ten points: four for the millers, two for the brewer, two for the witch you already had, and two for the witch you just gained.

Additionally, many locations have extra effects. If you claim a knight, for example, you get to attack the other players. Each player that has fewer guards than you have knights must take the character furthest to the left in their tableau—that is, a miller at the mill if there is one, a brewer at the brewery if there are no millers, a witch if there are no millers or brewers, and so on—and place it face down under the infirmary (so, for example, if I have three knights, Gina has three guards, and Sarah has two guards, Sarah must place her leftmost character in the infirmary. Gina has at least as many guards as I have knights, so she does not lose any characters in this way).

Some cards give you meeples instead of points, others give points to all players who meet a certain criterion (like the Brewery Side A which, when activated, gives two points to all players—including the active player—who have at least one brewer in their tableau). The cottage allows you to take a card from your infirmary and return it to your tableau. And Side B of the castle allows you to exchange meeples for gold or vice versa.


Winning Majesty: For the Realm

Play continues until all players have twelve character cards in their tableau (including the ones in their infirmary). At that point, you perform end game scoring. Some locations grant points at the game end. Then you total up the number of characters in your infirmary. You lose one point for each character in the infirmary (two points each, if using side B). Then count up how many of the other locations have at least one character. Square that number, and gain that many points (for example, if you had characters at five locations, 5 × 5 = 25, so you'd get 25 points; if all seven locations had characters, 7 × 7 = 49, so you'd get 49 points). Finally, each location has a majority point total. Whichever player has the most characters at that location gains that value (for instance, side A of the Inn has a majority bonus of 15, so whichever player has the most characters at the Inn gets fifteen points). If there's a tie, all tied players get the points.

Whoever has the most points wins.


Final Thoughts on Majesty: For the Realm

I was surprised by this game. The rules are fairly simple, yet they allow for an impressive strategic depth. It's easy enough to play with younger gamers, but deep enough to satisfy players of any age. My one complaint with this game is that the iconography can be a little confusing; many of the location cards use the plus symbol, which implies that you score for combinations of cards, when in fact, it grants points for any individual card of any of those types. I would have preferred that they use a different symbol, like a comma or a slash. Similarly, there's a passage in the rules where it explains the setup that uses the phrase 'set aside X cards.' That, to me, implies that the cards will not be used in the game. However, what they actually mean is that you should set aside cards to be used in the game. The cards that are not set aside are the ones removed from the game. This seems like awkward wording to me.

Anyway, that aside, I had fun learning the intricacies of gameplay, as well as experimenting with the B side of the location cards. But let's not forget the six characteristics of a good game:


I love it when a game hits all six points!

So there you have it. I hope that you are able to decide if this is a game you'd like to try, based on my description. And if you don't, that's fine as well! But either way, I look forward to seeing you back here next week, and until then,

Email ThisBlogThis!Share to TwitterShare to FacebookShare to Pinterest
Labels: board game, card game, Majesty: For the Realm, photos, review