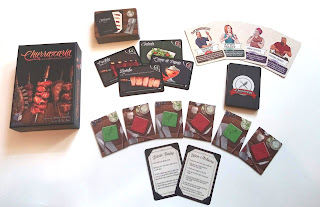 A friend of mine, David Thomas, is one of the founding members of Absurdist Productions. This company recently produced, as a result of a successful Kickstarter campaign, a game called Churrascaria. That word, pronounced CHEW-huh-scar-EE-uh, refers to a Brazilian Steakhouse. This game is about diners eating at a churrascaria, earning points for gorging on meat and losing points for eating sides and desserts.

Bear with me, I'll expound on that in a moment.

But much to my surprise, I recently realised that I have not yet written a review of that game! So, in order to rectify that error, I shall review it now. Starting, as we always start, with the numbers.


An Overview of Churrascaria

As mentioned previously, a churrascaria is a Brazilian steakhouse. It is known for serving large quantities of excellently prepared meat. However, a churrascaria works quite differently from most steakhouses. I went to one with the Dork Spouse not terribly long ago; it was expensive, but worth it. We were given a plate and shown to the salad and cheese bar. Don't be fooled, though; there was so much more to this than salad and cheese. There was a vast array of tasty dishes, including soups, shrimp, and a great many other tasty delicacies. The establishment we tried allows people to have just the salad bar at a discounted price, and I can easily see how that would be a filling and satisfying meal for anyone.

But the real magic started when we had cleaned our plate. That's when the pasadores began coming by. In addition to a standard waiter who brings you drinks and tends to your table, there are a large number of pasadores, the 'meat waiters.' Each one has a large skewer (almost a sword) on which are several pieces of meat. One pasador might have a skewer laden with frango (chicken legs), another might have linguiça (a brazilian sausage), a third might have lombo (parmesan-encrusted pork), and the next may have cordeiro (lamb marinated in wine). These meats have all been cooked on these skewers over an open fire.

As the pasadores come by your table, they will offer you a portion of whichever meat they have. They simply slice a bit off right onto your plate before moving on to see who else might want some of their offerings. If you decide you don't want any more, or if you need a break to eat what you have before you take any additional portions, you can flip your food request token to the 'no' side. This is a small piece of cardboard that is green on one side (the 'yes' side) and red on the other (the 'no' side). However, even if you have your token on the 'no' side, some pasadores might still stop at your table and offer you some more!

So the game of Churrascaria is a card game that attempts to simulate the experience of dining at a churrascaria. It consists of a food deck, an action/reaction deck, and some food request tokens. Each player has a 'plate'—a space in front of them for their food cards. You have room on your plate for four cards. You also have a hand of up to four action/reaction cards. Be sure to leave a space beside your plate for your 'stomach'—the place to set the food cards that you have 'eaten' off your plate. You earn points for eating meat (the tastier the meat, the more points it is worth), and you lose points for eating the 'tasty but ultimately unsatisfying' (as the rules describe them) sides and desserts.

On a player's turn, that player may take any two actions. There are four actions available:

Once the active player has taken two actions, they draw up to a hand size of four. If that player's food request token is on the 'sim' side (green 'yes' side up), they draw a food card and add it to their plate.

Ultimately, this game is intended to be somewhat cutthroat. Although the meat of the game (ha!) is about taking food cards and trying to score the most valuable ones, the real fun part comes from the action/reaction cards.

You may play action cards on your turn as one of your actions. These are generally cards that allow you to mess with the other players: 'Look Over There!' allows you to swap any two players' plates. 'Gorge Thyself' causes any one player to eat everything on their plate. And 'Were You Going to Eat That?' moves a food card from another player's plate to your own.

Also in the action/reaction deck are three 'Summon the Pasadores!' cards, which is a special card. Whenever this card is drawn, it is played immediately. The active player draws a new action/reaction card, then all players with their food request token on the 'sim' side draw another food card and add it to their plate.

If you ever need to draw a food card, but your plate is already full (you have four food cards on your plate), you must immediately eat the lowest-value card on your plate. This can be disastrous if you've amassed a number of side or dessert items on your plate.

Once the last food card has been drawn, all players take one final turn. Then they add up the value of all the food cards in their stomachs. The player with the highest score is declared the winner.

Another issue is that some people may be a bit put off by the theme. Many vegetarians and vegans will likely not care for a game about eating as much meat as you can. In fact, John Trobare (who is by no means a vegetarian) told me that he tends to prefer the sides to the meat; when he goes to a restaurant, he often likes the potatoes and bread more than the meat. As such, he found it a little hard to get into the theme; he said that the roasted potatoes, friend bananas, and cheese bread looked tastier to him than any of the positive value cards.

But if theme isn't important to you, or if you can get into the theme of gorging yourself on as much meat as you can, then Churrascaria might be a good game for you to try!

Let's not forget, though, about the six characteristics of a good game:
Outstanding! Another game with all six! So I hope you will consider giving this game a chance. Now go forth, eat meat, and above all,