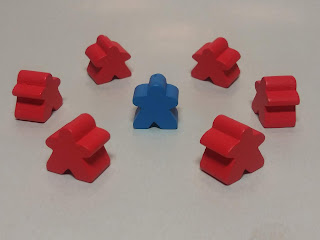 
A question of evolution

As mentioned, humans only recently developed agriculture (in evolutionary terms, at least). Agriculture developed about 6,000 to 10,000 years ago. Anatomically modern humans have existed for about 200,000 years, though. That's 3% to 5% of our species's existence. We still haven't got a handle on how to treat one another in this new social environment. Instead of seeing each other as peers, we now subdivide ourselves into groups. And with any situation in which divisive categories exist, there will always be an imbalance of power.

We see this in the mainstream culture of the United States. Those who 'fit in' are granted great social power, and those who do not are made to suffer. But it also occurs within subdivisions. As XKCD pointed out, human subcultures are nested fractally. In the United States, there are those who fit in, and those who do not. Among those who do not fit in, there are nerds, geeks, and dweebs. What exactly those three words mean is no longer clear; many people argue about it constantly. Some people have tried to define the difference, but language is usually difficult to codify so easily. But even within each subdivision, there are sub-subdivisions (are you a comics geek, a game geek, a computer geek, or something else entirely?).

This goes back to our ancestral makeup. Humans are social creatures; we need to feel like we belong to a tribe. But we also can't handle tribes of more than about a hundred fifty members. So when our community outgrows this number, we must subdivide it so that we can still manage our place within it. However, whereas our ancestors each belonged to a single tribe, modern humans have many overlapping tribes.

It used to be easy to know where you belonged in your tribe, but now that we belong to multiple overlapping but discrete tribes, a sense of identity is more elusive. Thus, we often feel the need to sharply delineate who belongs to our tribes, and who does not. In this way, we become more divisive.


What does this have to do with gaming?

It's the reason why we have discrimination. When we set up arbitrary standards to define who is 'a gamer' and who is not, people who do not fall into those arbitrary definitions are excluded. Many gamers think that women can't be gamers. Other gamers feel that women can only play 'girly' games like Candy Crush or Barbie Dreamhouse Party. People like this have created artificial boundaries for their tribes. Sometimes it's because they need that clear divisive line to understand their own place within their chosen tribe. Sometimes it's because they feel they've been excluded from the larger group, and have a psychological need to exclude others from their own group in order to feel a sense of social power that has been otherwise denied them.

It goes back to what the XKCD comic said about fractally nested subcultures: there are gamers, and there are non-gamers. Within the gamer subculture, there are inclusive gamers and exclusive gamers. Exclusive gamers sometimes feel that women can't be gamers. Others feel that so-called 'cool' people can't be 'real' gamers (this touches on the The Guild's song 'I'm the One That's Cool.' Although the song is meant to be funny, and it is, it is also very cathartic for me, and I'm sure for many others who were bullied as kids in the 80s). Many people have this idea that if someone was part of the 'cool' crowd as a kid, he can't be part of 'uncool' subcultures like gamers as an adult. Of course, this idea is nonsense.

It is true that many gamers, especially the hardcore gamers who attend conventions and seldom, if ever, participate in mainstream pursuits like sports, did come from a less socially-acceptable subculture. But not all of them did. And besides, if we are fleeing that sort of persecution, why on earth would it be acceptable to turn around and engage in exactly that same sort of persecution towards others? I just don't see any reason for it.

Anyway, that's what I've been thinking about. I don't know as it will do a lot of good in eliminating divisive behaviour in the gaming community. But hopefully now, at least we'll have a better understanding of why this divisiveness takes place. And maybe, if we're lucky, that knowledge will better equip us to deal with it when we do find ourselves facing that sort of discrimination.

So that's my thoughts for the week. I hope you enjoyed it. Until next time,