All told, it was a nice event. They had a portion of the main courtyard portioned off for the event, as well as several rooms for different purposes. In the courtyard, there was the check-in table, a snack bar, and several booths for local game designers. Three rooms were set aside for events (panels, RPGs, and the like). There was a small vendor area. But of course, the main draw was the free play area: 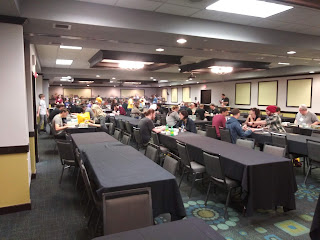 At one end of the area was the games library. Attendees were allowed to check out a game from the library. There were signs available that said either 'Players wanted' or 'Teachers Wanted.' Thus, people were meeting new friends and getting to try out new games. Right in front of the games library was a 'hot games' section, where a number of popular games were available for demonstration. I'm pleased to say that Fae was one of these games!

Absurdist Productions had a booth in the local game developers area, where they were demoing their recently successfully kickstarted game Churrascaria. A new start-up group was demoing their game Mixed Company, which they plan to launch on Kickstarter in a few months' time. A couple of other booths were there as well. But the one that had perhaps the greatest draw was Rodney Smith from Watch It Played. He not only spent time talking to people, but had a few panel talks as well.

At one end of the free play hall was the vendor area. Most of the booths here were local gaming shops, such as Loot & XP, Game HQ, and PB&J Games. In addition there was Meeple Realty, a local designer of wooden game inserts (similar to Broken Token), Denexa Plastic Playing Cards, and a gentleman with a variety of cleverly designed dice towers. 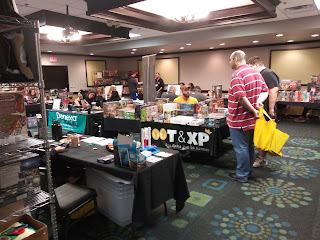 The convention had put out a call for people to run games. Obviously, a number people ran D&D (all in Adventurer's League format), but there was a Dungeon World one shot as well. And of course, I ran a one-shot of Changeling: The Dreaming. I only had a single person sign up, but her friend decided to join as well when he saw that there was space. They both really enjoyed the game I ran for them, which made me happy.

I didn't attend any panels, as none of them seemed to be of great interest to me. But there were raffles and play-to-win games and puzzles scattered around the area. I got in a few more games of Lanterns from my 10 × 10 list, met some fun new people who wanted to learn to play Blood Rage, and got to sample a variety of neat new games. Perhaps the cutest was this ridiculously adorable game called Echidna Shuffle, a children's game in which players move echidnas around the board with their coloured bugs hitching rides on the passing echidnas in an attempt to reach their home base: 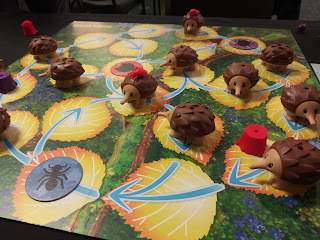 And, of course, I got to spend a little time chatting with some of my friends from Loot & XP, who were usually either working the games library or manning their booth in the vendor hall: 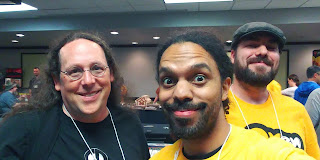 All in all, I had a good time. I am hopeful for the future of this convention, and I am pleased that I was able to take part in the maiden voyage of this new venture for the Oklahoma board game community.

So, my fellow gamers, I hope you have enjoyed reading about this new event, and until next time, I ask only that you continue to