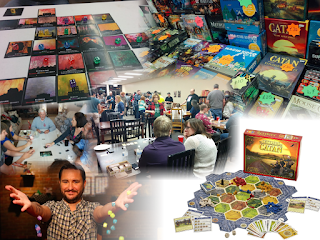 
Before the Golden Age

The earliest board games were simple affairs. Even before the advent of chess, there were games like the ancient Egyptian race game Senet, which is vaguely similar to backgammon. The Babylonians had Ur, and various games belonging to the mancala family were common throughout Africa. Although they became a little more involved over time, developing into the Norse tafl family of games (including hnefetafl and halatafl), as well as chess and go and checkers (draughts for non-American readers) and backgammon and parcheesi (or ludo outside of the US), it wasn't really until the 20th century that any new innovations began to come into existence. It was between 1900 and 1960 that modern classics like Monopoly, Sorry, Clue (known as Cluedo outside of the United States), and Risk were released. Even into the 1990s, most board games were either of the so-called 'American' variety, or were what are now referred to as 'Euro games.'

American games tended to be all about aggression, with players working directly against one another, and although they often emphasised the importance of the story behind the game, the mechanics of those games were often lackluster or daunting. In contrast, Euro games were more concerned with indirect conflict, such as competing for a single pool of resources, or struggling to see who could most efficiently complete a shared goal. Although Euro games often had smooth mechanics, the story behind the game was often lacking.


The Dawn of the Golden Age

It's seldom that people can point to a singular event and state with certainty and agreement, 'That is the beginning of the Golden Age.' But that's exactly what happened with board games: in 1995, a dental technician from Germany named Klaus Teber released the board game Settlers of Catan. This groundbreaking game combined the best elements of both American and Euro games. It had excellent mechanics, had players competing indirectly instead of aggressively, did away with player elimination, utilised a strong story, included beautiful components, and had other players involved on the current player's turn so that no one had a reason to 'check out' between turns.

This innovative game sparked a revolution. Suddenly, game designers realised that board games could be fun for everyone without instigating feuds within families or groups of friends. The Golden Age was upon us!


Effects of the Golden Age

Soon, amazing new board games were springing up all around. Change was slow, at first, but within five years, new classics were showing up. It was in 2000 that the first co-operative board game appeared (the Reiner Knizia-designed Lord of the Rings). This same year saw the release of other wildly successful games like Blokus and Carcassone. The website Board Game Geek (which is both a database, wiki, and social network for board games and card games) allows users to rate any game in the database, and uses the collective ratings to create a list of games ordered by rank. In the top 50, there is a single game published before 2002 (that being 1995's El Grande). Even if we go so far as to look at the top 100, there are only six new titles released prior to 2000 (interestingly, one of those is the ancient Chinese game Go). Three of these came out before 1995.

Obviously, there are some games which predate our current golden age that are still excellent games, that are considered to be a lot of fun. It is not my intent to suggest that old games have no value. I still enjoy a rousing game of Dungeon! from time to time.

But in terms of sheer quantity of high-quality games, there's no denying that we're living the high life right now. It's an exciting time to be alive! Especially with the existence of board game cafes all over the world, a fairly new phenomenon, but one that is growing! There's even a google map that shows the location of board game cafes around the planet.

Also, please don't misunderstand me. I don't mean to say or to imply that the only good games are tabletop games. Video games are fun too, as are physical games (sports), if you're into that sort of thing. But there's one thing that tabletop games give you that no other kind of game can: social interaction. There's just no substitute for sitting around the table with a bunch of your friends discussing the movement of little wooden pieces around a board, or trying to trick your friends into thinking you're one of the good guys when you're really a bad guy, or (in an especially humorous twist on the board game exemplified by the game Ugg-Tect) beating your friends over the head with inflatable clubs as you attempt to communicate, using grunts and gibberish, how they're supposed to build a structure.


A final word on the Golden Age of Board Games

I'm not the only one that's noticed the golden age. A year and a half ago, no less than the Guardian itself published an article on this very topic (in fact, I used that article as a reference for much of what I've typed here). Shut Up and Sit Down gave an excellent (though somewhat long and NSFW due to some language) talk about the golden age of board games. Heck, even Cracked has weighed in on the topic with their comparison of 'classic' board games and much better modern alternatives.

Again, I'm not trying to suggest that anyone stop playing other kinds of games. But if you haven't been playing any modern board games, you are really missing out. Seriously, go find your local hobby shop and check out the amazing games they have to offer. If there's a board game cafe near you, spend some time there to try before you buy. See if your local game shop has a game room for people to play in, so you can learn from others who know how to play already. But whatever you do, don't let this golden age pass you by. It's very important that you remember to