But the article that made me start thinking about this pointed out three examples of games that involve characters, at least one of which is transgender. Specifically, it mentions Dead of Winter, Deadline, and Legacy of Dragonholt. Each of these games are based around a story of some sort.

What's particularly distressing to me is that I recently finished playing the campaign mode of a story-based game involving characters! As you've probably read recently, I wrote a two-part review of Near and Far, in which players take on the role of one of several characters. Granted, there's no background given for the characters, so their gender never affects the game at all.

Which make it easy to introduce transgender characters in a game. Since it's never stated that, for example, Tanian (from Near and Far) or Vivian Lopez (from Betrayal at House on the Hill) are cis-gendered characters, we can always imagine that they're trans. 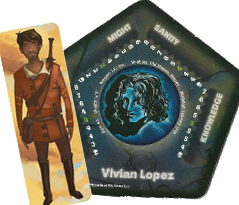 But that does seem like a bit of a cop-out, doesn't it?

That's what's so nice about games with deeper stories, such as Legacy of Dragonholt. Not only do the characters figure in the story, but their gender often has a lot to do with it. I won't describe what happens in Legacy of Dragonholt, in case you want to avoid spoilers. If you're already familiar with that game, or you don't mind spoilers, you can follow the link at the beginning of this article and read the overview there.

Maybe it's time I worked a little harder to break out of my old-fogey mindset of thinking in terms of colours as the only possible player representations in board games.

But the important thing is: we are starting to see some transgender representation. As is to be expected, it's coming slowly, and it's not always well done when it happens. But at least we're taking a step in the right direction.

So let's see some more, game designers! Let's work to develop some frequent and appropriate representation in more games! Because as we all know, everyone is welcome at the gaming table. And representation matters.

So with that, have fun playing games out there, and try to remember to make the world a better place through your games. But more than that,