I got to try my first 'Tiny Epic' game recently. If you don't know what that means, I'll tell you. Gamelyn Games publishes a series of 'Tiny Epic' games which come in a small box, take up a small amount of table space, are easy to learn, but pack in a great deal of enjoyable gameplay. And if Tiny Epic Galaxies, the game that I played, is any indication, that description is very apt.

So let's get into it! Here are some numbers to look at: 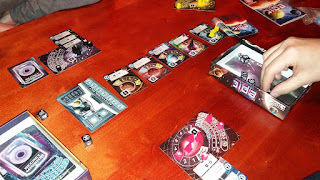 An Overview of Tiny Epic Galaxies

Players control galaxy-spanning civilisations, each competing to be the strongest and most powerful. By sending out their ships to colonise available planets, they can gain energy, culture, resources, and of course, victory points. The end game is triggered when one player reaches twenty-one points, at which point, finish the round so that every player has an equal number of turns. Then, the player with the most points is declared the winner.

Each player has a play mat. This mat has everything you need for your personal area: 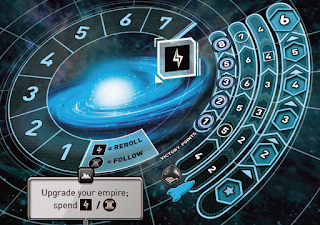 This mat is where you store your ships that are not being used, as well as keep track of your empire size, number of available ships, number of dice you're allowed to roll, and how much energy and culture you have.

In the centre of the table are several cards representing planets. Each planet has a victory point value, a special ability, and a track where you try to colonise that planet. These tracks have an icon for economy or diplomacy, indicating how that planet is colonised.

Move: You may move one of your ships from your galaxy to a planet, from one planet to another, or from a planet back to your galaxy. Your ships may be either on the planet's colonising track or the surface. You may have one ship on each on the same planet, but only one ship on any track and only one on any one planet surface.

Acquire Energy: You may choose one planet (or your galaxy) that has the energy icon, and gain one energy for each ship you have on that planet or galaxy.

Acquire Culture: You may choose one planet that has the culture icon, and gain one culture for each ship you have on that planet.

Advance Diplomacy: You may advance a ship you have on the colonisation track of a planet the requires Diplomacy to be colonised.

Advance Economy: You may advance a ship you have on the colonisation track of a planet the requires Economy to be colonised.

Utilise a Colony: You may use the special ability of a planet that you have successfully colonised. Alternately, you may upgrade your empire, spending a number of energy or culture points equal to the size of your empire plus one. This allows you to move your empire token one space along the empire size track.

You may use any of the icons you've rolled on these dice. You must use them one at a time, giving other players a chance to 'follow' (on another player's turn, you may follow an action taken by that player by spending a point of culture to take the same action). At any point, you may reroll any dice that you have not yet used; this is free the first time, but any subsequent rerolls require you to spend a point of energy.

Once one player has reached twenty-one points showing (that is, not counting the Secret Mission points, since the secret mission card is kept secret until the game is over), players finish the round so that everybody has an equal number of turns. Then you reveal the Secret Mission cards, total all your points, and whoever has the most is declared the winner.

This game lives up to its name. It fits into a very small box, is easy to learn, but has some surprising depth to it. There are strategic decisions at every turn; do I reroll my dice and hope I get something better? What order do I take my dice results in? Should I go for the high-value planet and spend a lot of time investing in it, or try for a lot of lower-point planets instead? Do I want to try to compete with the other player who already has a ship on that planet, or go for a different planet that may not be of as much use to me, but will likely be easier to get without someone else trying to get it at the same time?

And let's not forget to examine the six traits of a good game:

It's not as heavy as games like Blood Rage or Terra Mystica, but for casual games (and casual gamers), I think Tiny Epic Galaxies is an excellent game. Obviously, that's my opinion. You should decide for yourself. One thing I will say, though, is that I can't wait to try out the other games in the Tiny Epic series!

So there you go. I hope you enjoy reading my review, and more importantly, I hope that you always