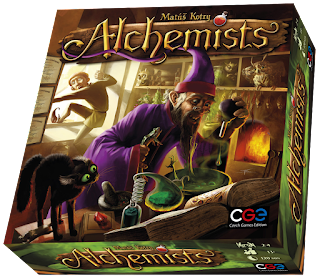 The stats for Alchemists:

In Alchemists, two to four players take on the role of... well, alchemists. There are a number of alchemical ingredients, and the players are tasked with discerning the nature of those ingredients. I have, in the past, described Alchemists as 'a worker placement game with elements of Clue and just a soupçon of Compounded.' I still say that that's a very accurate description.

My biggest complaint with this game is that it is so very complicated. There are hundreds of pieces, and the rules involved in many of the possible actions are so convoluted that it's almost like each available action is a mini-game unto itself. I will get to that in a moment, but first, I want to describe the nature of the alchemical ingredients themselves.


The Nature of Alchemy

Alchemists is played with an app on your smartphone or tablet. There are rules (and additional game pieces) that allow you play without an app, if you're unwilling or unable to download the app, but that requires an extra person who is not playing to sit nearby and give you the results of any alchemical experimentation you may wish to perform. Here's how it works: the main deck of cards consists of eight alchemical ingredients: raven's claws, mandrake root, ferns, toads, spongy mushrooms, black feathers, scorpions, and herbal flowers. Each ingredient has an alchemical profile, which consists of three dots (one each in red, blue, and green) marked with either a positive or negative sign. The app randomises these aspects, so that the game is different every time, and no matter how many times you've played, you still have to research to find out what the aspect is in this instance.

Thus, there are seven possible potions that can be created (each in various ways):


In the course of the game, you will combine ingredients to see what kind of potion results, and use that information to deduce the alchemical aspects of those ingredients.

At the beginning of a round, players take turns choosing turn order. Having an earlier position on the turn order chart is obviously beneficial, but later positions grant you extra ingredient cards as well as favours from the citizens of your town. Thus, it can often be in your best interest to opt for a later turn order position.

Once turn order has been determined, players place their action cubes on the board to determine which of the available actions they will take in this round. Then those actions are performed. Available actions in Alchemists include:

This is a simple action. There are five face up ingredient cards; you may choose any one of these (they are not replaced until the end of the round, so later turn order reduces the available face up cards), or you may choose to draw the top card of the ingredient deck, taking your chances on which one you get if none of the available face up cards are to your liking (or if there are none left).

This is also a simple action. You simply discard an ingredient card of your choice in exchange for a gold piece. This is a very inefficient way to get gold, but sometimes, it can be a good option if you're desperate for cash (especially in the first round of the game).

This action is one of the two most complicated actions available. Each round after the first, an adventurer tile is placed on this space of the board. Each adventurer is looking to purchase three potions, marked on the tile. Alchemists can sell potions to the adventurer. It doesn't have to be exactly the potion the adventurer wants; you can try to sell him or her a potion that has the right symbol (positive or negative) but not necessarily the right colour, or you can simply offer to sell him or her a random potion. The closer you're able to guarantee that you'll match the potion he or she desires, the more gold you'll get for it. But whatever level of guarantee you offer, if you fail to meet your guarantee, you get no gold at all.

Certain artifacts are made available for purchase. These artifacts allow you special abilities, such as the Periscope, which lets you look at an ingredient used by another player when he creates a potion (normally, players must reveal what sort of potion they have created any time they combine ingredients, but keep the ingredients themselves secret), or the Boots of Speed, which allow you to take an extra action so long as you have at least one action cube on that action. Players with action cubes on the Purchase Artifacts space may purchase one of the artifacts currently available.

Alchemists with action cubes on this space may use the app to debunk a published theory (more on publishing theories in the next section). If you know that at least one of the alchemical aspects of a published theory is wrong, you may use this action to demonstrate the error of another player (or of yourself!), which gains you reputation, and may cause a loss of reputation for the player(s) who published that theory. Be careful, however; if you fail to debunk a theory, you will lose reputation yourself!

This is the second of the two most complicated actions available in the game. There is a secondary game board which is placed to the side of main board. There is a space for each of the eight ingredients. To publish a theory, you spend gold to fund your publisher, then place one of the eight alchemical aspect tokens on the space for the ingredient that you think has that aspect. You can, if you're not sure about one of the colours, hedge your bet against that colour, but that is very complicated (especially if you're playing with the Master rules variant instead of the Apprentice Rules), so I won't go into it now. Suffice to say, you get reputation for publishing, and may gain victory points at the end of the game if you're proven correct, but other players may try to debunk your theories, and there are grants that can be earned as well... yeah, it's that complicated.

This is the primary way in which players learn about the alchemical aspects of ingredients in Alchemists. Players combine ingredients and have a student drink the resulting potion to see what it does. Going first has an advantage here; the first few potions a student tests are free. However, the first time the student drinks a potion with a negative sign (Poison, Paralysis, or Insanity), he starts charging one gold for any subsequent tests. You simply combine two ingredient cards, scan them with the app, and make a note of which potion results.


Test Potion on Self

This is the secondary way to learn about alchemical aspects. It is functionally identical to testing on a student, with two differences: first, because you're drinking your own potions, it will always be free. Secondly, because you're drinking your own potions, you will suffer the effects of those potions. In most cases, there's no in-game effect. However, if you drink a negative-sign potion (Poison, Paralysis, or Insanity), you will have a negative consequence. The Poison potion loses you action cubes for the next round; the Insanity potion loses you reputation, and the Paralysis potion moves you to the very bottom of the turn order on the next round.

The game lasts for six rounds, with conferences occurring on the third and fifth rounds (the main effect of conferences is that you lose reputation if you haven't published enough theories, though those who've published multiple theories may gain reputation). On the final round, the two Test Potion spaces are covered up with the Exhibition mini-board. Placing action cubes on this board allows you to demonstrate that you know how to create one of the six non-neutral potions, which is good for additional victory points. Then you convert your reputation into victory points, gain more victory points for other conditions (such as your artifacts, grants, gold, favour cards, and so forth). Use the app to reveal the correct aspects of each ingredient, which can gain or lose more victory points based on the theories you've published. The winner is the player with the most victory points.

I've glossed over a lot of details in this game. Even so, this review seems pretty lengthy to me, which just goes to show how complicated it is. After learning to play it at the board game cafe, the owners asked me to teach them to play (it seems it was the only game in their library that none of them knew how to play), so I read and reread the rules booklet at home, and I still needed to refer back to the rules many times during the course of teaching them to play. This game takes a long time to play, and even a long time to set up because of the number of pieces. Also, each player has a 'cauldron,' which is a small screen that contains a grid where you can place tokens to record any aspects of ingredients. This grid can be hard to work with, and given that this is, in many ways, the main point of the game, that lost this game points in the Attractiveness category for me, as it seemed to make the game harder to handle, physically, than it needed to be.

Parts of the game are fun, but Alchemists suffers a lot from the biggest complaint I have with worker placement games: remembering how each of the different actions works. Especially on the Sell Potions and Debunk/Publish Theories spaces, there are a lot of rules to keep track of. I, personally, might play this game again in the right circumstances, but I strongly doubt that I'll be enthusiastic about playing most of the time, let alone buying a copy of my own.

But again, that's just my opinion. Look at the ratings above and decide for yourself. Until next week,