An Overview of Skull 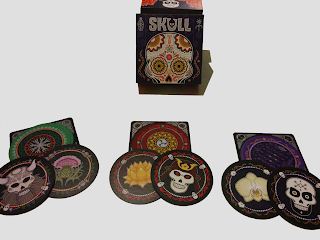 Each player has five coasters cards. One is square: this is the score mat. It starts with the flower side up. The other side is the skull side, and it is turned face up when the player scores a point. The other coasters cards are round with an intricate pattern on the back. One of these coasters cards has a skull, the rest have a flower. Players take turns placing their coasters cards face down on their scoring mat until somebody decides to start bidding. Then it becomes a game of bluffing, perception, and perhaps a little bit of luck. Each player announces how many coasters cards can be turned over without revealing a skull. The highest bidding player must then turn over the number bid. If that player turns over a skull, that player loses a coaster card. If not, the player gains a point (indicated by turning the score mat over to the skull side). If the player gains a second point, that player is declared the winner. If a player loses all the coasters cards as a result of revealing skulls, that player is out of the game. If a player is the last one in the game, then that player is declared the winner.

First, let me just say that the cards in this game very strongly resemble coasters. It was a running joke throughout the games that we played. The cards are of solid cardboard construction. They do strongly remind me of the disposable coasters used in bars.

Anyway. So each player chooses a card and places it face down on their scoring mat. Once everyone has at least one card on their mats, players may choose to either:

Once a player has started bidding, no one may place any more cards on their stack. They must either bid a higher number, or pass. The highest bidder must turn over a number of cards equal to the number bid.

If that player turns over cards equal to the bid without revealing a skull, that player is awarded a point. If a skull is revealed, however, a card is discarded from that player's hand.

However, in the first few games that I played, we did not enforce the 'turn over your own cards first' rule. Players were allowed to turn over any cards they wanted, their own or others'. This made for a slightly different dynamic. I recommend it as an optional rule variant.

If, as a result of revealing skulls, a player no longer has any cards in hand, that player is eliminated from the game. If only one player remains, that player is declared the winner. Otherwise, the first player to score two points (that is, scoring a point when the scoring mat is already turned over to the skull side as a result of scoring a point earlier in the game) is declared the winner.

This game is surprisingly dynamic. It involves a lot of bluffing. In essence, you are trying to accomplish two simultaneous feats: outbid other players without revealing a skull, and trick other players into revealing your skull.

If I were to be completely honest, the vast majority of my enjoyment of this game came from baiting the other players into turning over my skull card. There was one player in particular (I'll call him George) who allowed himself to be baited so often, and so very easily. In fact, the first time I started the bidding, I did it with my skull card on top of my stack of two. I did this intentionally knowing that George would think it was safe to turn over my top card. Sure enough, he outbid me, and immediately turned over my skull card. He was absolutely astounded to find my skull card on top. My schadenfreude was palpable. His mouth hung agape for several seconds. It was glorious.

Anyway. I really enjoyed this game. I expect I will play it again soon. It's quick, easy, and a lot of fun. But more to the point, it involves a surprising amount of thought: do I trust the other player? Can I trick the other players into trusting me? Do I risk bidding a higher number and losing one of my cards? Can I afford to lose a card by outbidding someone knowing that I'm going to turn over a skull in order to prevent another player from getting a second point?

And, we'll look as always at the six characteristics of a good game:
Five out of six: that's not bad! So, not perfect, but pretty darn good. Also, given how short a game tends to last, the player elimination is not as big a deal as it would be in other games. 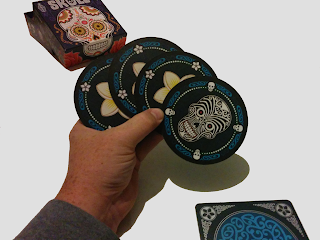 * The artwork in this game deserves a special mention. For one, the artwork varies between versions: there's an English/Spanish version and an English/French version. The art is different in these two. I played with the English/French edition. The art on the box cover made it look like it would have more in common with Latin American tradition, as the skull on the box resembled something from a Día de los muertos celebration. The art on the cards, however, appeared to be more in keeping with a stereotypical American biker gang, and so was not in a style that I personally found appealing.

The artwork in the other version looks more like a biker tattoo. In that sense, it is more thematically appropriate, although I find it less enjoyable overall than in the version I played. It does have a nice nod to the industry, however; one of the biker gangs in this version is the Werewolves, and the back of the Werewolves' cards incorporates the logo from The Werewolves of Miller's Hollow.

Now, given that art is very subjective, I fully admit that someone else might rate the Attractiveness of this game as 'Ideal.' The artwork is very well done. I just can't bring myself to give it a higher rating, due to its lack of aesthetic appeal to me personally. But don't let that sway your opinion too much! It's a fun game regardless of the artwork!

Anyway. I think that's quite enough for such a small and simple game. I'll stop for now. I'll see you back here next time, as long as you promise to