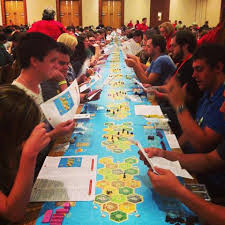 Studies have shown that the larger a community, the more likely it is to be open and accepting of all individuals. Conversely, the suicide rates in smaller communities are higher, per capita, than in larger ones. This is true not only for individuals who don't fit the prescribed social roles in that community (for example, those who do not follow the majority religion of a community, LGBT+ individuals, ethnic minorities, and so on), but even for those who do fit in. The obvious corollary is that in a broader social setting, it's more likely that you'll be exposed to people who are different from you. This exposure makes diversity familiar, less frightening. On the other hand, if the only people you see are those who are similar to yourself, the stranger (and therefore, the scarier) other kinds of people will be to you.

Sitting down at a table and playing games with others can be very helpful in this regard. Note that these games have to be played in person; it's not my intent to say that computer and console games are not worthwhile, but it's not as helpful in a social context to interact via microphone and keyboard as it is to sit next to an actual physical person.

Of course, for this to be truly effective, it helps if the group with which you are playing is diverse as well. Playing games with people who are the same (ethnicity, religion, social class, etc) as you won't do a whole lot of good. To make it even more effective, you could play roleplaying games that include diverse characters as well! I did this with my most recent campaign, in fact. The NPCs included a variety of individuals, with the primary antagonists including a Norseman, an Arab woman, and an African American woman, and secondary antagonists that included a Kenyan man, a Quechua woman, and a Navajo woman. In addition, the Navajo woman was a lesbian (the players may not have noticed it, but that fact played a major role in her backstory and was integral to how the character came to be an antagonist in the first place).

Will games change the world? Probably not. And certainly not overnight. But the more exposure we can get to other people, the more diversity we encounter in our social settings, the more we can make people open to new and different experiences and new and different ways of living life. Who knows? Perhaps if we get more people to play more games, maybe eventually we can make the world a better place!

If you're looking for ways to get involved in games with new and different people, to make new friends and broaden your social horizons, try checking out a board game cafe. They're literally all over the world, like Ludus Luderius in São Paulo and Board Game Cafe Hungary in Budapest, or Cafe Meeple in Kyoto and the Go Lounge in Sydney. For something a little closer to home, try The Uncommons in New York City, or the Cafe Meeples in Richmond, Kentucky, or the GameHäus Café in Los Angeles, or Meeples Games in Seattle.

In fact, there's a fairly comprehensive list of board game cafes in a forum thread over at Board Game Geek! And if you don't want to search through those entries, most (if not all) of the locations are marked on a Google Map. So check it out, and find someplace awesome to meet new people and have a great time playing games! Until next time,