It's time for another board game review. This week, I've decided to cover Captain Sonar. It's a fun little game that captures the suspense of submarine warfare. We'll start as we always do, with the ratings: 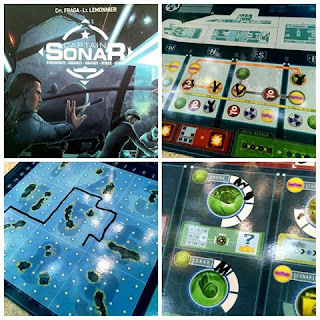 In Captain Sonar, four to eight players sort themselves into two teams of submarine crews. The two teams are attempting to sink each other's vessels. Each team has four positions: captain, first officer, mechanic, and radio officer. The game works best if you have a full complement of eight players, so that each player can take a different role. If there are fewer than eight players available, then someone will have to fill two different roles simultaneously.

Here's what's going on: the players are navigating their submarines around a system of islands trying to find and destroy each other. The captain does most of the work of navigating: both captains have maps of the islands around which they are navigating (it's the image in the lower left of the picture above). They mark their ships' courses on their maps, using dry-erase markers. Whenever they think they have an opportunity to shoot at the enemy vessel, the captains announce the co-ordinates they are targeting, and if the enemy vessel is at or adjacent to that position, they take damage. Once a sub takes four points of damage, it sinks, and the opposing team is declared the winner.

The captains can't just move wherever they like. Each space moved on the map requires the mechanic to cross off one of the icons on the mechanic board. This board is a network of icons connected by paths and divided into four sections. Each section is labelled North, South, East, or West. To move east, the mechanic marks off an icon in the East section, and so forth. Whatever icon is crossed off of the mechanic board indicates that that system (sensors, weapons, or stealth) ceases functioning. These marks can be erased, however, either by marking off all the icons connected by a line, or by surfacing (more on this in a moment).

In addition to moving around the board, the captain must also request the use of various shipboard systems. The first officer board has gauges for each system. There are two sensors available: sonar and drones. There are two weapons available: torpedoes and mines. There are two possible stealth systems: silence and 'scenario.' The scenario system is only available when playing certain scenarios, and what it does depends on the scenario being played.

The systems work as follows:

The final position is the radio operator. In many ways, this job is the most difficult in the game. The radio operator's role is to listen to the enemy captain. As the captain marks the sub's movement around the map, he announces the moves he is making ('One space north!'). The mechanic generally confirms if the ship is able to moved in that direction ('One space north confirmed.') to let the captain know that the mechanic is able to get the ship to actually move in that direction. As the enemy captain calls out these moves, the radio operator listens and plots the movement on a sheet of clear plastic that sits atop a map of the islands. Since the radio operator does not know where the enemy sub began, this plastic sheet can be moved around the map to find where the the enemy sub may be located.

All of this is happening in real time. Although the rules allow for a version which is played turn-by-turn, the real fun comes from players on each team shouting at each other as they try to manoeuvre the sub quickly out of danger but simultaneously into attack range...

When firing a torpedo, detonating a mine, or using either of the sensor systems, the captain calls 'Full stop!' Both teams stop until the current action is resolved, then resume real-time actions. In all other cases, including surfacing, the enemy ship is continually moving, so it does not behoove you be complacent.

Speaking of surfacing, the mechanic may become so distraught keeping all the components in working order that the best option is to simply wipe the board clean of all marks. To do this, the captain must announce that they are surfacing. Once a sub has surfaced, each player must trace a line around the outline of a section of the submarine on the mechanic's board. The enemy mechanic judges if the outline is accurate, or if any line has strayed out of the acceptable drawing area. If the enemy mechanic deems the tracing job acceptable, the mechanic is allowed to erase all marks on the mechanic board. The sub then submerges again and may resume normal operation. Surfacing also allows the captain to erase the path he's taken so far, reopening the map for movement (as a submarine is not allowed to cross, retrace, or double back on its path).

If, however, the enemy mechanic decides that the tracing was not accurate enough, the existing traced lines are erased and the crew must try again.

Since the enemy sub does not cease operations whilst you are surfaced, it is in your best interests to trace the board as quickly as you can.

All of this is going on with a screen running down the centre of the table to hide your player boards from the enemy crew. Once a sub is sunk, the other team is declared the winner.

There is some strategy involved in this game, as you must deduce from the movement of the enemy captain where the enemy sub is currently located. But mostly, it's a frantic race to track down and attack the enemy before they track you down and destroy you. Like Panic on Wall Street, this game is fun because it allows you to be boisterous, rowdy, and loud. If that's not your kind of game, you won't like Captain Sonar. Furthermore, this game requires excellent communication skills (especially in the case of the radio operator, who must have exceptional listening skills). If you do not possess such skills, you probably won't like Captain Sonar.

Needless to say, I liked it. And in terms of the six requirements of a good game:

So there you have it. If you haven't tried this game, hopefully I've convinced you that you should. But if you can tell from my description that it's not your sort of game, that's fine too. In either case, I hope you have enjoyed reading this review. Go forth, play more games, and remember to