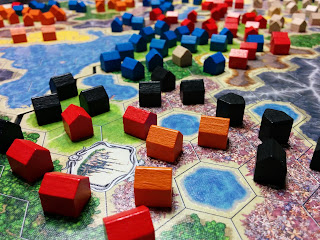 I've been able to play this game a few times now, and though at first I didn't think much of it, my second play through caused me to realise that it's actually a really good game. It has all of the best elements of a good game that I described in my article on good games. There's no player elimination, it has a lot of player agency, it's relatively simple, it ends decisively, it allows for upsets, and best of all, it's fun to lose. So let's take a look at it.

The lands spread out before you, just waiting to be settled. Riches await the one who is able to seize the best territory. Can you move your people into the most beneficial areas? Victory awaits the one who can!

This game consists of several board segments made up of hexagonal spaces. These spaces can be one of several different terrain types. Some are forests, and others grasslands. Some are flowers, and some are canyons. There are lots of water spaces, which cannot normally be built on; the same is true for mountain spaces. In addition, each board segment has two 'locations' and a city. Players choose four of these segments at random and place them together to create the playing area for this game. Thus, the board is different every time.

Then you draw a number of goal cards, which describe the main ways that players earn victory points. In some games, you earn points for each settlement adjacent to a water space. Others give you points for having the most settlements in each of the four board segments. Some cards even award you for having settlements in a straight line. But in this way, the victory conditions also change each game.

Tokens are placed on each location; these tokens grant you bonus moves. You can claim a token when you build a settlement adjacent to that location. Then each player receives forty wooden house tokens in his or her colour.

On a player's turn, he may place up to three settlements on the board. However, he is restricted by two factors:


This is where the strategy of the game comes in. Whenever you place settlements, you're causing subsequent settlements to be drawn to the same clump of terrain until that clump is full. Thus, for example, in the photo at the beginning of this article, in the front left, there is a small cluster of five grassland hexes together, surrounded by water, forests, and flowers, with one city space next to it. Once the first black house was placed there, any subsequent black houses placed in grassland spaces must go in this same little clump of spaces, until all of them are full. Furthermore, if the black player draws a forest card, he must place in the forest spaces adjacent to a settlement in the grassland spaces.

So choosing where to place your settlements is very tricky, as it will affect your possible placement options for several turns afterwards.

Once you have acquired a token from one of the locations, it grants you additional optional actions. Some such tokens let you place an extra settlement on a flower space, so long as it obeys the rules of adjacency (it must be adjacent to one of your existing settlements if it is legally possible to do so). Another one lets you move a settlement from one space to another. A third token lets you place a settlement at the end of a straight line of three or more of your settlements already on the board, extending that line by one more.

The more tokens you collect, the more additional optional actions you can take. And it is very maddening when someone prevents you from getting a token.

In fact, that's one of the best things about this game. It has a lot of potential for 'screw you!' actions. That is, a player may take a space that you wanted before you get a chance to place a settlement there. Or a player may completely surround a location before you get a token from it, meaning that you are now completely unable to get a token from that location at all.

Although there's no direct conflict in this game (you can't attack other players, or remove their settlements from the board), but by blocking other players' moves, you can greatly anger those players. Many were the times in which a player would become enraged and begin shouting at another player who'd just stolen a spot that the first player had been working towards for three or four turns...

Once a player has exhausted his supply of forty settlements, finish the round so that everyone has an equal number of turns. Then calculate the victory point total for each player. Whoever has the most points is the winner.

That's the whole game. And yet, from such a simple premise with very basic mechanics, there is a lot of strategy and planning in this game. There's a little bit of randomness in the selection and placement of board segments, but the vast portion of randomness comes from the cards you draw to determine where you're able to place your settlements this turn. Usually, this averages out over the course of the game, but I have seen a player spend six or more turns drawing nothing but canyon cards (and getting more annoyed with each one).

So, if you like thinky-thinky games that fit all the aforementioned criteria of a good game, Kingdom Builder might just be for you. And if it's not enough, there are four expansions already, each adding new board segments, new location tokens, and a spattering of other new rules.

Anyway, I think that's all for now. I hope you enjoyed this review! I'll see you back here next week! Until then, have fun playing games, and remember to