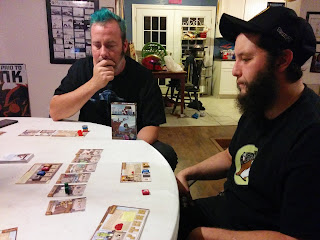 
This does not include things like player aids or the 'Harbour Master' card.

The central play mat, as well as the deck of building cards, are placed in the centre. The starting value of each commodity is determined randomly by placing a block for each good at random on the commodity track. Five buildings are dealt face up in the centre. Players choose a colour and place their meeple next to their play mat. In the advanced game, each play mat represents a different character with a special ability, but in the basic game, all play mats are turned to the basic side, which are all identical. They choose three goods to start the game, and arrange their commodity blocks accordingly.

I'm going to pause here to describe the commodity blocks, because they're really kind of ingenious. Rather than having a bunch of tokens or other game components to represent the various goods, each player is given one block for each good, and moves it up and down along the track on his player mat to indicate how many of that item he possesses. Thus, in the image below, we see that the red player has two each of wood, stone, and fish, and currently has no meat.

This limits the amount of components needed to play the game, as well as keeping costs down. Furthermore, the central play mat has a similar track, but instead of showing how many of each commodity there are, it shows the current market value for each one. 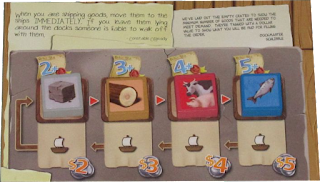 When a player sells goods, he moves the token on this central play mat down to the ship space below it. This grants that player the appropriate amount of money. For example, in the photo above, selling fish would grant that player $5, whereas selling stone would only grant him $2. Goods are not sold on a cost-per-unit basis; that is, selling two stone does not grant you $2 per unit of stone sold. Instead, you gain that amount of money for your entire supply of stone. You must have at least the amount indicated on the play mat to sell that item. In other words, in the photo above, you have to have at least two stone to sell it at all. Having more does not grant you any benefit; if you currently have six stone and you choose to sell it, you lose all of your stone and still only get $2.

Once a player has finished selling his goods and spent the money he gains from it, all tokens are moved along the track, following the sideways U path indicated by the arrows on the mat. All tokens are move as far along the track as possible. This means that any time a good is sold, it decreases in value, and when two or more goods are sold at once, they are reversed in worth.

So, using the photo above, let's imagine that a player is selling all of his fish, meat, and stone at once. He moves those three tokens straight down onto the ship space beneath them. This grants him a total of eleven dollars ($5 for the fish, $4 for the meat, and $2 for the stone). Then, because the wood is the only one still on the top, it is moved all the way to the right, now occupying the 5+ space. The stone is the next furthest along the track, so is moved up to the 4+ space. Then the meat is moved to the 3+ space, and finally, the fish is moved into the 2+ space. Thus, the wood, which was not sold, has now jumped in price. What was formerly the most expensive item is now the cheapest. And so on.

So, now that we understand that aspect of the game, let's look at how the game is actually played. On a player's turn, he moves his meeple to any unoccupied building. This can be one of the cards in the centre of the play area (these being unowned buildings), one of the cards in any player's play area, either his own or an opponent's (these being the buildings owned by individual players), or the building represented on a player's play mat (again, his own or another player).

After moving your meeple to a building, you may take the action described on that building. The two most common actions include purchasing a building and gaining commodities. Usually, you simply gain a commodity (or multiple commodities). For example, in the cards shown to the right, the Traders Guild grants you a single wood in addition to swapping the places of two items in the market on the central play mat.

The purchase icon (which resembles a building next to two dollar signs) allows you to sell your goods as described above, and use the income to purchase one of the cards available in the central play area. This does not prevent other players from using that card, but unless a player has a card with a top hat icon (as seen for example on the Lumber Yard card at right), he must pay you any one good of his choice as a toll for using your building. But the important thing is that you gain victory points for each building you purchase.

The game continues until one player has purchased four buildings. Each other player gets one final turn, and then the player with the most victory points takes a selfie with the Harbour Master card and is declared the winner.

This game is surprisingly robust, with a lot of careful consideration being given to every action. Yet it's still quick and easy, with a lot of humour (look at the artwork in the cards shown above to see what I mean). I really enjoyed this game, and even though I've only played it twice, I'm impatient to own a copy so I can share it with others!

Anyway, that's it for this week. I'll see you back here next week. Until then,