Board Game Review: The Lord of the Rings

Not surprisingly, many games have been created based on the works of J.R.R. Tolkien. However, my favourite is the co-operative board game by Reiner Knizia, in which players take on the roles of the hobbits in the fellowship and attempt to carry the One Ring to Mordor where they must drop it into the fires of Mt Doom. Very much like the story in the books, no? Perhaps that's part of why I like it so much!

Let's look at the numbers, shall we?

The game consists of several smaller boards: one main activity board and two double-sided scenario boards. The main activity board shows the overall progress of the group on their journey from The Shire to Mordor. Each side of the scenario boards represents one of the main conflict areas from the story: Moria, Helm's Deep, Shelob's Lair, and Mordor. It looks something like this: 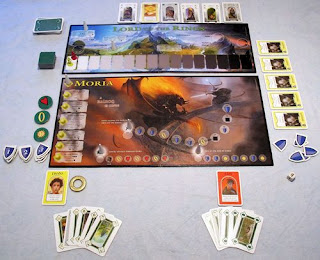 The larger of the two boards, labelled 'Moria,' is the first scenario board. The smaller board above it is the activity board. The activity board has two parts: the upper part shows a sort of cross-section view of Middle Earth, with the Shire on the left, the Misty Mountains in the middle, and Mordor on the right. A token representing the fellowship starts in the Shire and is moved to the next area as the players complete each section. The lower part is the darkness/lightness track. Each player starts with his hobbit at 0, on the left, in the pure light, untainted by darkness. Another token representing the Eye of Sauron starts on the right (for easy games, all the way to the right on 15, for moderate games, at 12, and for hard games, at 10). As the game progresses, the players may have to move their hobbits towards the darkness, or events may cause Sauron to move closer towards the light. If ever a hobbit lands on the same space as (or passes) Sauron on this track, that player has completely succumbed to the darkness, and is removed from the game (if that player is the current ringbearer, the game ends with victory for Sauron!).

But most of the activity in the game takes place on the scenario boards. Moria is the first of these (unless you're using the Friends and Foes expansion), and is shown in the picture above. Once this scenario is completed, you flip the board over to reveal the Helm's Deep scenario. After that expansion is complete, you grab the second scenario board and play out the Shelob's Lair scenario, then flip that over for the final scenario, Mordor.

Also on the left side of each scenario board is a list of six events. Some of these events can be somewhat beneficial, if you've completed certain requirements; if you haven't, the events are bad. Those events that don't have a potential beneficial option are just plain bad. The lower you go on the list, the worse the events are.

On each player's turn, he draws an event tile from the shuffled stack of event tiles (the Sauron expansion gives you a draw bag that makes it easier to work with the event tiles). Roughly half of these tiles have one of the event icons listed above (tree, handshake, feet, or sword and axe); if you pull one of these, then you move the marker on that track (if it's for an activity that's not on the current scenario board, treat it as a wild card). The other half are bad things, including: moving the ringbearer one space towards the darkness; moving Sauron one space towards the light; forcing the group to discard cards, shields, or life tokens; or move the marker to the next event on the scenario board and follow the instructions listed there. If you draw one of these bad tiles, you must suffer its effects and then draw again. You keep drawing until you get an activity icon.

Once you've done this, you may play up to two cards from your hand. Most of these have one or more activity icon; some have a star icon, which is wild and may be used as any icon. Some cards are grey and some are white; you can't play the same colour card. You have to play one of each. Whichever icon you play, you move the marker along that track on the scenario board. Most spaces give you something; many give you a shield (shields are most often used to purchase one of Gandalf's spells, but have other uses as well). Others give you one of three life tokens: a heart, a sun, or a ring. These are necessary at the end of each scenario board; for each one you don't have, your hobbit moves a space closer to the darkness. Some spaces have other effects, like giving you special cards (like Shadowfax, which has two travel icons, or Glamdring, which gives you two fighting icons), allowing you to move your hobbit one step back towards the light, or requiring you to roll the die (which is usually a Bad Thing).

There are also some yellow cards, which do not count towards the 'one white and one grey' limit, and have unusual effects, like ignoring missing life tokens, or allowing one player to pass a card to another player. Also, the ringbearer may put on the ring to skip over one or more spaces on any of the activity tracks. He normally suffers some ill effect for doing so, determined by a roll of the Bad Things die.

Once you complete a scenario board, you suffer the effects of missing life tokens, and whoever has the most ring icon tokens becomes the new ringbearer. Then you move on to the next scenario.

If you manage to make it to the end of the main activity track in Mordor, you must make a series of rolls to see if you can resist the siren call of the ring and throw it into the pit of Mt Doom. This requires careful planning, teamwork, and more than a small amount of luck. But fear not; each player has a special ability (depending on which hobbit he is playing): Frodo can use any white card as a wild card; Sam can ignore some of the bad effects of rolling the die; Merry can ignore a single missing life token in each scenario; Pippin is immune to the 'one white, one grey' rule, and may play any two cards on his turn; Fatty gets to draw extra cards at the end of each scenario (I know he wasn't part of the original fellowship; he's included in this game anyway!).

Like most co-operative board games, I like this one a lot. It's fun, but suspenseful, and requires a lot of thinking and group planning. Plus, it captures the essence of the novels, which is a bonus!

Anyway, I think that's enough for today. I'll see you here next week! Until then,

Email ThisBlogThis!Share to TwitterShare to FacebookShare to Pinterest
Labels: board game, Lord of the Rings, photos, review