Last week, I mentioned some of the great games to which I've been introduced as a result of joining the local game club. One of them was Puerto Rico, which I would describe as sort of a cross between Citadels and Settlers of Catan. I think I'd like to do a review of that particular game. So here we go! First, the ratings:

Puerto Rico is a worker-placement game of acquiring and managing resources. The object of the game is to earn victory points. The primary method of earning victory points is by shipping goods to Europe, although the buildings that you purchase and build in your city also grant you victory points. To produce goods, you need plantations which grow the crops, special processing facilities to convert the crops into goods, and workers to operate both the plantations and the processing facilities. There are five goods that you may produce: corn, indigo, sugar, tobacco, and coffee. Corn is special; it does not need to be processed as the others do; simply growing it in the plantations is sufficient. The other crops, however, need to be converted before they can be shipped. Indigo is processed in indigo plants, sugar is made from sugar cane in sugar mills, tobacco is dried in tobacco storage, and coffee is roasted in a coffee roaster.

Players are given a board, with twelve spaces for plantation counters (you have one plantation at the beginning of the game) and twelve spaces for buildings. On each player's turn, they choose a role from the available role cards; the chosen role grants all players a specific action, although the player who selected that role gets an additional benefit that the other players do not get (the exception is the Prospector role; the player who selects this role gets a single dubloon, and the other players get nothing). It is through selection of these roles that the action of the game takes place. The roles are as follows:

Goods are produced in the following manner: each time the Craftsman role is selected, you look at how many plantations you have. For each plantation that has a colonist on it (the plantations are small cardboard squares with a white circle on it; colonists are small wooden disks; when you receive new colonists, you may place one colonist on any empty white circle), you produce one unit of that crop -- corn, indigo, sugar, tobacco, or coffee. Because corn does not need to be processed, each unit you produce gives you a yellow barrel. Each unit of any other crop must be then processed in the appropriate building. For each colonist you have in the appropriate building, one unit of crop is then turned into a barrel (blue for indigo, white for sugar, light brown for tobacco, and dark brown for coffee). If you produce more units of crops than you are able to process into a barrel, the excess is lost; you cannot save crops to be converted later. Thus, it takes two colonists, one plantation, and one building to produce a single barrel, with the exception of corn, which requires only one colonist and one plantation.

In addition to the four processing buildings (technically, six; the sugar mill and indigo plant both come in a small and regular size - the only differences between them being price, victory point value, and the number of colonists that can be put to work in each), there are several other buildings that can be purchased. Each building grants its owner some benefit; for example, the small market grants you an additional dubloon for each barrel you sell to the trading house when the trader role is selected. There are many buildings; some grant you extra colonists, some give you additional plantations, some protect you from losing goods if you cannot load them onto a ship when the Captain role is selected, some reduce or eliminate certain limitations in specific scenarios, and so forth. There are even 5 large buildings, which take up 2 spaces in your city, that grant you multipliers to your victory points (for example, one grants you an extra victory point for each four full victory points you got from shipping goods, and another grants you an extra victory point for every three colonists you have).

The game is, in my opinion, a lot of fun. There are some intricacies that can take a little bit of getting used to, but after you've played one game, it shouldn't be that hard to remember how everything works for next time. It's a very strategic game; the only place randomness comes into play is in determining which plantations are available to select when someone chooses the Settler role. Don't think it's impossible to be completely hosed, though; depending on which roles the other players choose, you may find all your careful planning rendered moot. Just as one example, in the last game I played, I selected my roles based on careful consideration of what the other players were going to select on their turns. However, almost every time, they selected different roles than I had anticipated, even though such selection was not always beneficial to them. As a result, I was taking actions in a less-than-ideal sequence, which minimised the effectiveness of those actions.

My only complaint with the game is that it is not of the most durable construction. The boards are not as sturdy as those found in most other games, and although this does help to keep the game's price lower, it also means that handling the pieces can be sometimes slightly awkward. The tokens used for the buildings are plain rectangular pieces of cardboard of a single colour; I feel like they could have had a watermark illustration of the building behind the text to make them a little more attractive. The components are shown in this photo: 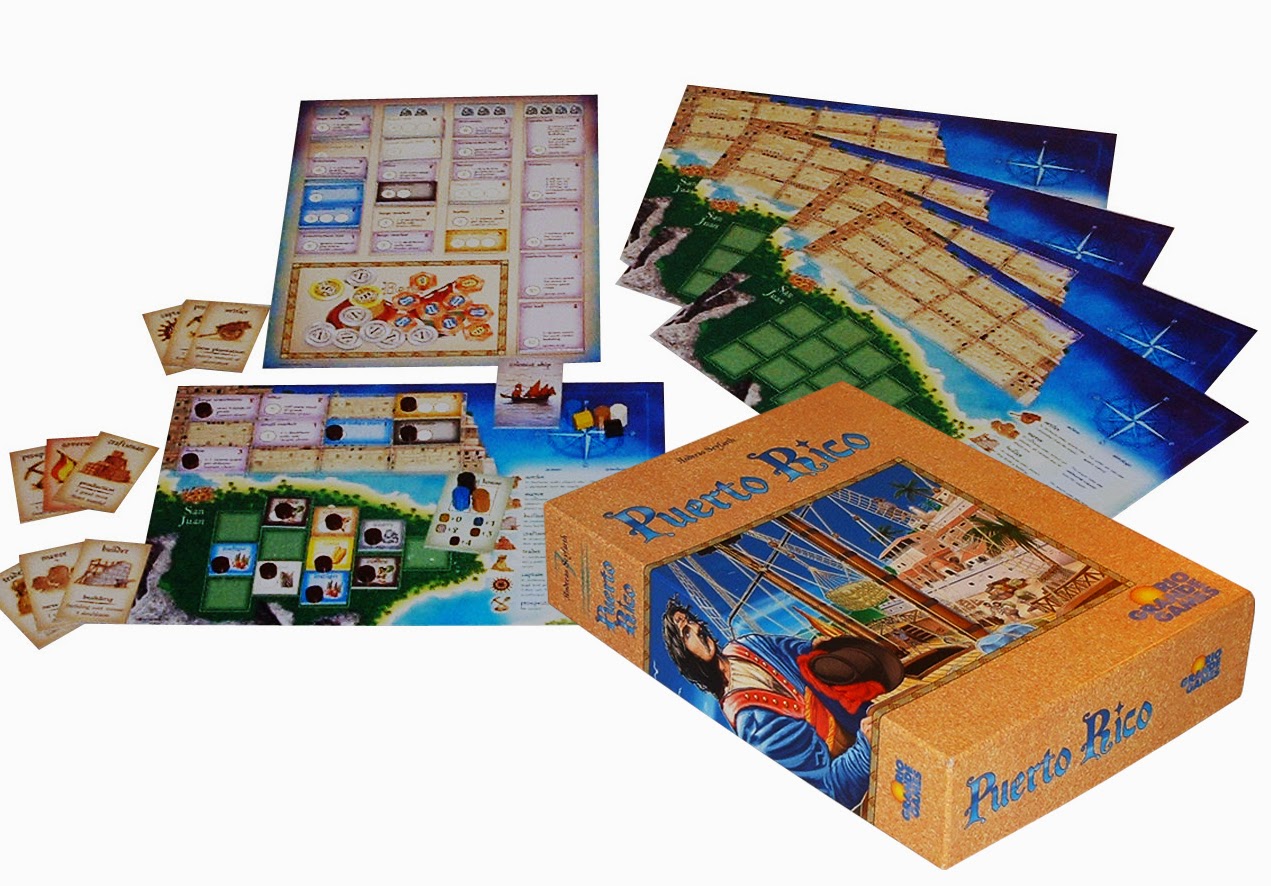 But those are, honestly, superficial concerns that do not affect game play at all. I, for one, recommend this game. I think it's a lot of fun. If you want to try it out, you can play it at http://en.boardgamearena.com/ (I played a game with a guy from the US, another from China, and one from Indonesia!).

So with that, I conclude another game review. Until next week, I bid you: