When I was very young, I watched a movie called E.T. I'm sure you've heard of it. I remember a brief scene in that film that involved some people sitting around a table with 3D models of tunnel walls, talking about arrows in the chest and undead creatures casting spells. For a long time, I thought that that was what Dungeons and Dragons was: an elaborate board game with a lot of parts.

When I grew older and finally learned about what D&D really was and how it worked, I realised that all of that stuff on the table wasn't necessary (for that matter, in my experience, most players don't mess with that level of paraphernalia; they just place figurines on 2D maps). Some players prefer that level of detail, but others are content with mere verbal descriptions.

As a Storyteller/Method Actor, I didn't feel a great need for miniatures. On occasion, when we got involved in an intense combat, it would be necessary to give players a somewhat more exacting description of where the characters were located in relation to each other, and to the items in the scenery (trees, buildings, cars, etc). Normally, I would just mark the places on a piece of paper. If it was available, I would be fancy by making use of a dry-erase board.

One of the problems I had with miniatures is that, especially in highly diverse and customisable settings such as Changeling, it can be hard to find a miniature that resembles your character. Another problem was the expense; metal figurines are pricey, and plastic ones aren't that much better (especially if you're playing a game which has pre-painted miniatures available).

I don't know who first came up with the idea of Cardboard Heroes, but it was a genius idea. Rather than having fully 3D figures, you simply print (or draw) two images on a narrow strip of paper: one front view and one rear view. The strip is folded into a small tent shape with the front view on one side and the rear view on the other. This alternative was cheaper and, in many ways, easier than full-blown models. Sometimes, it can be argued, they may even look better!

Steve Jackson Games really made the biggest impact with this idea, publishing several volumes for many different genres. Other companies came out with their own versions. But again, it can sometimes be hard to find images that are sufficiently similar to the appearance you may want for your character. Although it's easy to make do (I'm using a picture of a brunette male with a red coat, even though my character is blonde and wears a blue coat), it's nice to actually match the image on your mini with the desired description of your actual character.

I had an idea several years ago; I prepared a number of blank cardboard miniatures and gave them to my players. I asked them to draw their characters on the cards. This gave them ultimate flexibility in making sure that their figures looked exactly the way they wanted them to. The downside was that many of them did not have a great deal of artistic ability, and felt that they couldn't do a very good job with their minis.

Enter The Order of the Stick. When Rich Burlew ran the wildly successful Kickstarter campaign a few years ago, one of the rewards that were given out was a series of pdf cardboard heroes sets. This gave me the idea to make the figurines in the OotS style, which would counteract my lack of artistic ability as well as that of my players. Sure, the minis aren't realistic at all, but they're still pretty (for those who like the OotS artwork, as I and many of my players do). Plus, I have enough skill with GIMP (GNU Image Manipulation Program) to take the descriptions given me by my players and make decent representations of their characters.

Here's a picture to show you what I mean. These are the miniatures I created the first time I used this idea: 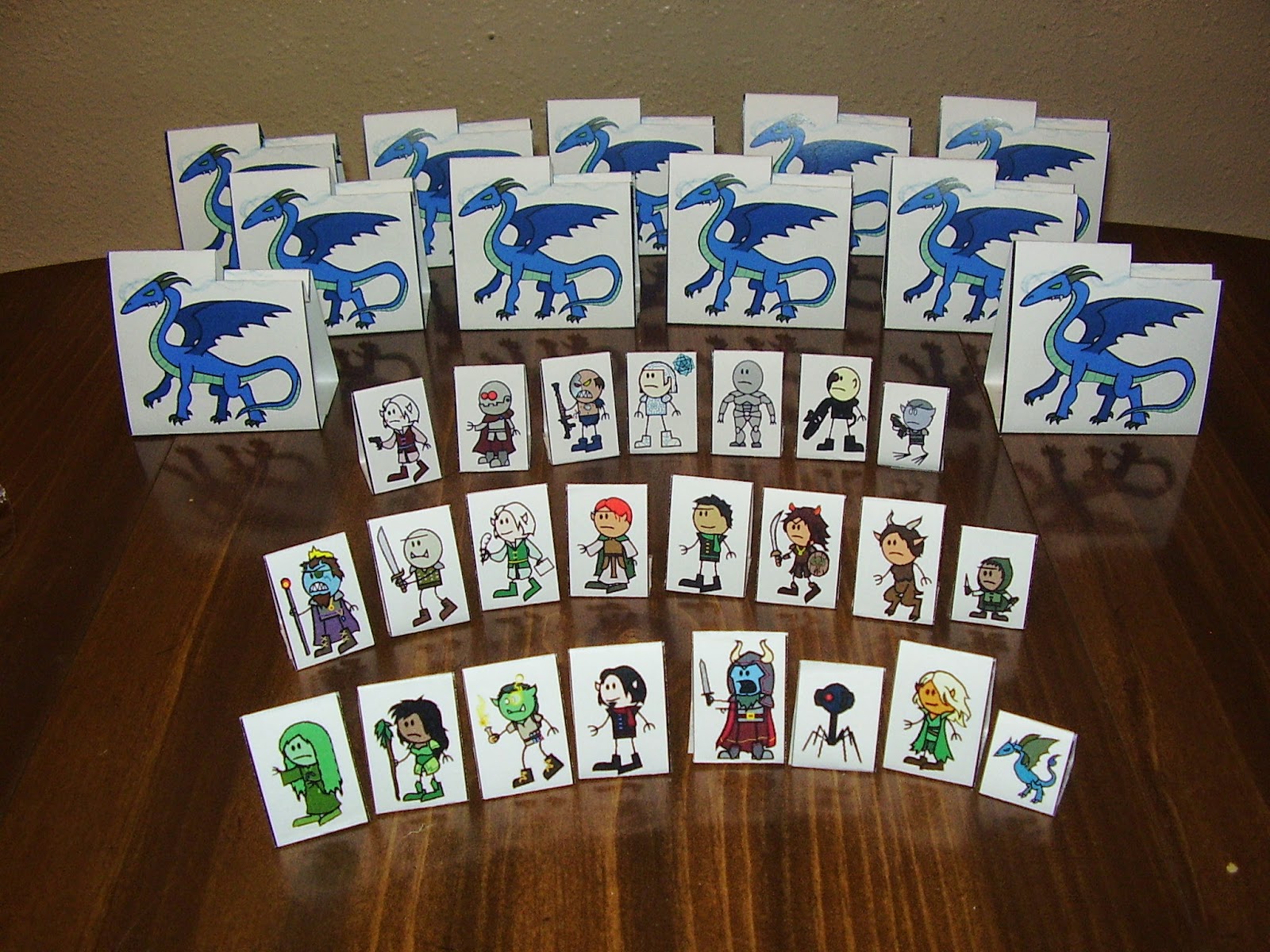 Doing it in this manner really adds something to the game, in my opinion. The players are delighted with the personalised minis, the whimsical nature of the illustrations adds to the ambiance of the games I like to run, and when we use these in a casual way to help visualise the combat, it makes the game easier and more fun.

Just an interesting idea. Do with it as you see fit. And until next time,