Some years ago, I saw an advert in a catalogue for a 3 Player Chess Set. I thought it looked really nice, but I didn't want to spend the money to buy one. Instead, I came home and made my own. It looks a little like this: 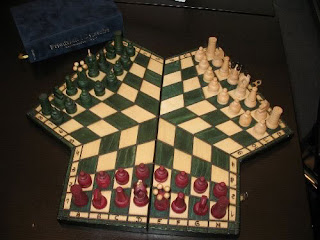 I didn't bother with the labels on the edge, and the pieces don't look exactly like that, but otherwise, it's a pretty good comparison. However, the disadvantage to making my own board was that I didn't have the instructions for it. I tried a few times to get people to work out the details with me, but it never really quite happened.

I had a couple of friends volunteer to try it with me. We started discussing the permutations. For one, how do you handle diagonal moves through the centre point? What happens when one player finds himself in checkmate? Do his pieces remain on the board as obstacles, or are they removed? How do you win? Do you need to checkmate both your opponents, or only one?

At their urging, I googled 'three player chess.' It wasn't the first time I'd done it, but we decided to try again anyway. As before, I found no rules for a board of this set-up, but we decided to borrow the rules from a version that had this arrangement:

The short version is: Each player is attacking the opponent to his right, and defending against the player to his left. To enforce this, if one of your pieces is in the 'kingdom' of the player to your left, that player gets (within certain limits) two moves per turn until the offending piece is removed. As such, moving on a diagonal through the centre point always takes you into the kingdom to your right. The game is won by the first player to capture a king (checkmate isn't enough; because of the dynamics of a three-player game, you must actually capture the king), regardless of which king he captures.

The game we played was very bloody, in part because none of us were chess masters to begin with, and adding the three-player rules made us all a bit more unsure, plus the unusual geometry of the board... and it didn't help that we were all sleepy, as it was pretty late when we decided to play.

In all, though, I think it worked very well, and I'd love to try it again sometime. Perhaps I'll post more about it if I get to play again in the future. Until then, keep playing, and remember to