Hello and welcome to another week of the Game Dork's rantings. Sorry it's a day late; yesterday was quite crazy.

Today, I will review the board game known by many different names (the box is labelled "Tara," but it also says "Project Kells." It's made by "Tailten Games." But if you open the box and read the rules, it claims the game is called "Sacred Hill," and suggests that you go to their websit eat projectkells.com but that redirects you to http://www.tailtengames.com, so who knows what to call this game?). 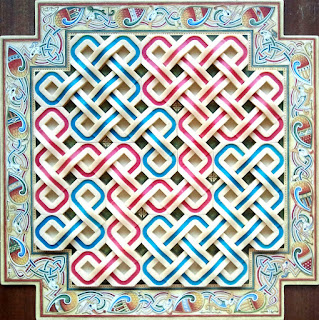 The game itself, according to the rules booklet, is just one variant possible with the equipment provided, and the website has rules for a second, called "High Kings of Tara." In fact, several of the game components aren't used in "Sacred Hill" at all.

Anyway, before we go any further, let's get the statistics up here:

The game consists of a board with a series of square holes, into which the plastic playing pieces fit. These playing pieces are painted with either a red or a blue soft-corner square. The other important pieces are the "bridges," small plastic strips (also in either red or blue) which can be placed across two adjacent pieces to connect them in such a way that the two squares become a small celtic knot. An example of what I'm talking about can be seen on the image above.

The game takes place in two stages: the first is manouevres. The two players take turns placing their pieces on the board wherever they like, so long as it is not closer than a knight's move (an L-shaped move of two spaces in one direction and one in a perpendicular direction) from any of their already-placed pieces. Once you can no longer place new pieces, you move to the second stage of the game: battles.

This name is a little misleading. In the battle stage, players place their pieces adjacent to already existing pieces on the board. When you place a piece, you must use the bridges to connect it to all of your pieces adjacent to the new piece. Thus, your pieces become linked together into larger and larger networks of celtic knotwork.

The reason I think the term "battles" is misleading is because the object of the game is to have the fewest number of "kingdoms." A kingdom is any single set of interconnected pieces of your own colour (the pieces, by the way, are called "ring forts" in the rulebook, while each space on the board is called a "hill"), whether it's a single unconnected ring fort, or a sprawling mass of twenty connected ring forts. Thus, it is generally not to your advantage to capture your opponents forts, unless doing so will enable you to connect two kingdoms that weren't previously connectable. However, it is often wise to have your own forts captured, as this reduces the number of kingdoms you possess.

You may only capture single unconnected ring forts. You do this by surrounding it on all available sides (four for a piece in the middle of the board, three for a piece on the side of the board, and two for a piece in the corner). On your turn, if you have any of your opponent's pieces "threatened" in this manner, you must capture it. This is done by removing the threatened ring fort and replacing it with one of your own. Capturing is done as your turn; that is, instead of placing a ring fort as normal.

As a result of this, it turns out that it is often preferable to develop a single ring fort into a kingdom and leave all your other unconnected ring forts alone as long as possible in the hopes that your opponent will have no choice but to capture them, thus reducing the number of your kingdoms. Likewise, you normally will want to avoid capturing your opponent's ring forts. This is especially true since the moment you connect two ring forts, even if there's only two forts in a kingdom, they cannot be captured.

Once there are no more empty spaces on the board, count up the number of kingdoms you have. Whichever player has fewer wins. If you have the same number of kingdoms, then the player with more territory (more ring forts on the board) wins. This is the one way in which capturing your opponent's forts is actually beneficial, but in my experience, it can be very hard to know when to go for the territory option as opposed to the number-of-kingdom options.

As for the asterisk noted under Appearance above, the game is visually quite remarkable. I was tempted to rate it as "Ideal," because the pieces are designed so that if you press down on one corner, it will tilt up and raise the opposite corner so that you can easily remove it from the board. I thought that was ingenious, but unfortunately, that design was hampered by the bridges used to connect the ring forts. They were designed to be easy to put in place, but in my experience, the design doesn't help as much as perhaps it could, but does almost reduce the attractiveness of the pieces.

Anyway, that's my review of Sacred Hill (or whichever other name you want to use for the game). If you like, you can see a Flash demo on their website. And with that, I bid you,