The Appeal of Board Games 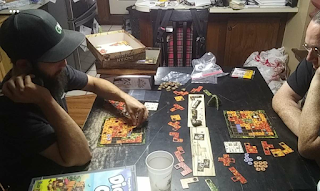 Not too long ago, I published an article in which I referenced an ex-girlfriend who once told me that I think too much. Specifically, it was in the context of a comparison of casinos to board game cafes, and the differences between board games and gambling. I was reminded of this by two events that recently happened: I attended a friend's party, and a different friend sent me a link to an article about how board games can reduce cognitive decline in old age.

The article does not mention the reason why board games are so beneficial to mental fortitude; it quotes the author of a scientific study as saying 'it is not just general intellectual and social activity, it seems; it is something in this group of games that has this small but detectable association with better cognitive ageing.' Which implies that they don't claim to know why board games improve cognitive function in the elderly.

Sure, I'm no scientist, but I have a pretty good idea what it is about board games that make them so beneficial. Two factors: social interaction and mental engagement.


Social Interaction in Board Games

The article states that the researchers had previously found a positive effect from playing video games. The article does not compare the results of the two different studies, so I don't know if the scientists determined that board games were better than digital games or not, but I would hazard a guess that they probably are. The reason I say that is something I've said on this blog many times in the past: board games offer social interaction in a way that video games do not.

Most video games are either played solo or with other people online. Sure, there are exceptions, in which you're playing with someone sitting beside you in the same physical room, but generally, it's done via interaction over a headset, or with no interaction with other humans at all. Board games, on the other hand, require other people sitting at the same table (or at least in the same room) as you.

Although there are digital versions of many games out there, and some games can be played solo, but in general, you need at least one other person with you to play a game.

Given that the dominant survival trait of the human species is social interaction, it's no wonder that activities that rely on that trait are beneficial to our mental well-being.

Mental Engagement in Board Games

The other characteristic of board games is that they require at least some level of cognition. Ok, yeah, there are some games that don't require much; Candy Land or Snakes/Chutes and Ladders are two extreme examples. Many luck-based games, like Zombie Dice or Munchkin, rely more on random die rolls or card draws to determine the winner than on skill, strategy, or player actions. But even those games require some decisions; in Zombie Dice, players must choose whether to keep the points they've earned so far or to press their luck and roll again. In Munchkin, players decide when to play the cards they've received, and on whom.

Contrast this with more decision-based games, like Dominant Species or Blokus. Although there may be some level of randomness in these games (the random card draw, element tokens, and terrain tiles in Dominant Species, for example), the winner is determined by the actions the players choose to take, and how those actions are performed, rather than on what cards they receive. In extreme examples, like Blokus, player decisions (which piece to play and where to play it) are the only determining factor.

Cognition, like muscle strength and agility, improves when it is used. The more you use your brain, the stronger it becomes. So it's no surprise that games which require you to think make you better at thinking.

What Does This Have To Do With That Party You Mentioned?

I'm so glad you asked! See, the party in question was purportedly going to involve board games (it did not; the only activities that occurred at the party were talking and eating/drinking). As I was preparing to travel to the party, I took a look at my games collection to see if there were any games that would be suitable to bring along with me.

As I was looking through my collection, I found that most of the games I own would not be well received by most of the people at this party; that is to say, non-gamers. Most of the games I looked at, if I felt a strong desire to play it, I realised that few other people would be interested. I base this statement on many past experiences. Often, the games I'm most excited to play (games like Clans, Jórvík, or Colosseum) are the ones that are least intriguing to other people. They often prefer party games (like Telestrations), especially if they're vulgar (Cards Against Humanity).

And I find that frequently, the games preferred by most people are the ones that don't involve thinking.

Aside from the fact that games provide me a framework for painless social interaction, the thing I love most about them is that they give me a chance to exercise my cognitive processes. Weighing options, making decisions, finding the best path to victory... I love to think. All my favourite activities involve thinking. When not playing games, I'm reading thought-provoking books or articles, watching thought-provoking movies or TV shows, doing thought-intensive puzzles...

I don't go for games with extreme amounts of thought; super-intense strategy games like Star Wars: X-Wings Miniatures or Warhammer 40,000 are too much for my taste. Whether that's because those games are too long or because they're too centred on direct confrontation (or perhaps some combination of the two), I don't know. But deeper, more euro-style games without direction conflict, that don't take more than a couple of hours, are my favourite type of game.

And I fear I am in the minority in that respect. Most people don't enjoy thinking as much as I do (thus, why the ex-girlfriend referenced in the Casinos entry felt that 'you think too much' was a valid criticism). That was why I chose thinking-lite games like Cheer Up to take to the party I mentioned above.

Regardless, there is always an advantage to playing board games, even if they are not the type of games that involve advanced thinking. So if you're not the sort of person that plays a lot of board games, you should give it a try. Especially since, with the vast array of games available on the market today, you're guaranteed to find one that you like.

So that's what I have for you this week! I hope you enjoyed reading it. If you did, share it with someone that you think would enjoy it too. And above all, remember to