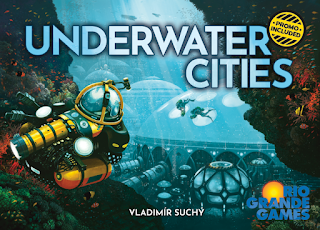 John can be very impulsive sometimes. One day, he showed up to our usual Friday night game night with a new game that he'd seen at the FLGS and bought immediately because he thought it looked interesting.

Well, we played it that night, and again a couple weeks later. The game in question was (of course) Underwater Cities by Vladimir Suchy from Rio Grande Games. It turned out to be an interesting fusion of worker placement, economic development, and resource management. Normally, these are three game mechanics for which I don't care. But oddly enough, this game combined them in a way that made me not hate it.

But I'm getting ahead of myself. Let's do this properly, shall we? Here are the numbers:


An Overview of Underwater Cities 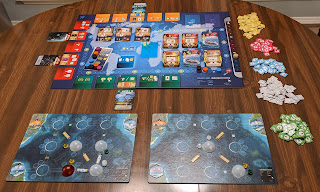 Players take on the role of scientists and administrators designing and building underwater settlements to ease the overpopulation of the earth. There is much that must be done to make these cities successful: water desalination, new farming techniques, production of advanced materials, the building and maintaining of the structures themselves...

Each player has a player board. They start with a single city in the lower right corner. They must build tunnels between spaces and domes in the spaces themselves (domes provide benefit in the scoring rounds, but only if connected to the network by a tunnel). Additionally, there are three bonus tiles (randomly drawn each game) in the other three corners; if connected to your network by more tunnels, you get the benefit of that tile. Next to the space for each dome are spaces for additional buildings: water desalination plants, farms, and laboratories. Building and upgrading these gives you further benefits.

To build these, you must take actions on the main board. The primary area of the main board are the fifteen coloured spaces along three edges. Players have three tiles which may be placed on these spaces; a single round consists of placing these tiles, worker-placement style, on one of the available spaces and taking the action(s) listed on that space. Actions include (among other things) building domes, tunnels, or auxiliary buildings, upgrading any of these, acquiring resources (like money, kelp, or steelplast), acquiring additional cards, and moving up in turn order.

But in addition to placing your tile on a space, you must also play a card from your hand. If the colour of the played card matches the colour of the space on which you place your tile (the five spaces on one side of the board are green, the five spaces on the next side are red, and the five spaces on the third side are orange), then in addition to the action(s) from the space, you also get to take the action on the card. These actions can be almost anything, from duplicating an action that's already been covered by a player's tile, to bonus points at the end of the game.

After everyone has placed their tiles and taken the appropriate actions, you advance the round marker, sort out the new initiative order, and deal new cards as needed. After round four, the first scoring round occurs. Players receive the benefits of the building's they've built so far, score points for the tableau they have, and spend kelp to feed their cities. Another scoring round occurs after round seven, and a final scoring round takes place at the end of the tenth and final round. Any end game bonuses are applied, and the player with the most points is declared the winner.

There is a lot I haven't touched on, like the assistant cards and how to get points. This review is already feeling a little overwhelming. One thing I will say is that this game has perhaps the best written rulebook of any I've encountered. It's only four pages long, and yet John said after he had read it once that he felt he understood completely how to play the game.

The game does contain player aids to help remember how scoring, building, and upgrading work. It takes a while to get used to it; it's laid out in a very compact manner, but because of the amount of information contained in it, it can take a while to understand how to read it.

As far as variations, the player boards are double sided, so you can change that if you like. There is also a solo variant included.

I don't know why, but despite my usual dislike of worker placement and economic development games, I found I enjoyed playing Underwater Cities. It somehow managed to combine these mechanics in a way that worked for me. In fact, I was able to win the first game I played, which is unusual in games of this type. Sure, I'm not likely to buy my own copy of this game, but I wouldn't refuse to play it again if it was suggested by other players.

But let's not forget the ultimate measure of a game: the six characteristics of a good game:
There's a lot going on in this game, and it can be a bit much for new players to keep track of. The player aid is helpful, but figuring out how the player aid works can sometimes be a task in itself. Once you've played the game a time or two, it all makes sense and you can proceed with confidence. But since it takes that amount of time, I can't give this game that rating full on.

Still, even with that caveat, it doesn't have any ❌s, so that's a good thing.

And with that, I hope you've been able to decide if this game is worth giving a shot. I hope you have a good time playing games, and remember as always to